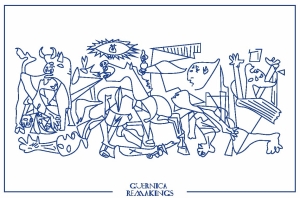 This post marks the first in an AiW series introducing the project and upcoming exhibition, Guernica Remakings, curated by Dr Nicola Ashmore (University of Brighton). The exhibition, which opens next week (July 31), involves the display of a textile artwork recently created by the Keiskamma Art Project, South Africa (2016-17). Accompanying the opening of Guernica Remakings, and the display of the latest Keiskamma artwork based on Picasso’s painting, AiW are also delighted to be hosting three short documentary films of the makers of the Keiskamma Guernicas, through a further three forthcoming posts linking to the project’s video footage.

I am Dr Nicola Ashmore, Senior Lecturer in the History of Art and Design at the University of Brighton. For five years I have been researching remakings of Pablo Picasso’s iconic painting Guernica (1937), each of which testify to the ongoing power of Picasso’s work as a focus for political activism through the visual arts. This summer, as part of the eightieth anniversary of the bombing of the Basque town of Gernika in Spain and of Picasso’s anti-fascist painting, created as a protest response to that attack and others targeting the civilian population of Spain, I am curating this research for an exhibition, Guernica Remakings, running from 31 July – 23 August 2017 at the University of Brighton’s Grand Parade Gallery.

The exhibition explores the contemporary significance of Picasso’s painting through a display of these reworkings, including a new textile artwork created for the exhibition as part of the ‘Guernica Remakings’ project by members of the Keiskamma Art Project, South Africa. It is the fifth Guernica the Keiskamma Art Project has made, and is also one of a number of remakings of iconic Western artworks remade by the KAP, including the Keiskamma Tapestry, their version of the Bayeaux Tapestry, which now hangs in South Africa’s Parliament buildings in Cape Town. 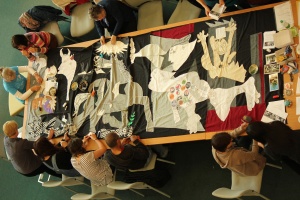 My interest in Guernica dates back to 2012 when I joined a UK Brighton-based collective about to embark on the recreation of the painting as a protest banner. We were disturbed by the rise of fascist groups across Europe, the presence of Islamaphobia in the anglophone media, and the increasing use and British military funded support of drones to attack civilian targets. Galvanised into action, we created the Banner through a series of 14 open public sewings held in England and India. Some came to sew a number of times, at different venues, seeming to enjoy feeling part of a political art project. The banner makers also noticed an interesting silent dialogue that seems to happen between the sewer, the stitch and the cloth, through which a temporary placement of fabric becomes permanent, and individuals’ actions contribute to a collective statement against aerial attacks on civilian populations.

My experience of making the Banner was profoundly influential and in 2015, I conducted a series of trips to carry out archival research and interview people involved in other remakings of Guernica to explore its potential for collective ways of working in support of political activism. To date this research connects these forms of artistic interventionist activity in Spain, France, England, India, the USA, Canada, and, in the remaking in focus here, South Africa.

Alongside this newly commissioned textile and mixed-media work from South Africa, what is now the fifth Keiskamma Guernica, a series of twelve documentary films, created as avenues for self-representation and the articulation of the insights and processes of the makers, record the materiality and physical context of each of the Guernica remakings in the exhibition.

Three of these films, which focus on the first and largest of the South African Keiskamma Guernicas (2010), will be hosted by Africa in Words in a series of upcoming posts to accompany the opening of Guernica Remakings, and the display of the latest Keiskamma textile artwork (2017) based on Picasso’s painting.

The creation of the fifth Keiskamma Guernica is part of a direct exploration of what it is about this artwork that lends itself to being adapted. Located in the Eastern Cape of South Africa in the villages of Hamburg and Bodiam, over 100 women and a small number of men are employed on the The Keiskamma Art Project, developed by medical doctor and artist Carol Hofmeyr as a way to build esteem and accelerate healing in the wake of HIV/AIDS. The Project has remade Picasso’s Guernica as a series of textile artworks a total of five times between 2010 and 2017. All five of the Keiskamma Guernicas tell the story of the HIV/AIDS crisis and its impact on the people of the area. Like Picasso’s Guernica, the Keiskamma Guernicas push back against those in a position of power. They challenge the ineffectual response of consecutive South African governments to act upon the HIV/AIDS epidemic, emphasising the real human cost of this health crisis.

In a more explicit way than the UK-based collective Banner remaking, the Keiskamma Guernicas are an example of how one historical moment and culturally specific situation is translated across to another through Guernica. This translation of Picasso’s iconic anti-fascist artwork transforms its geography, time and narrative from Spain to South Africa, from the early 20th century to the beginning of the 21st century, from anti-fascism to the HIV/AIDS crisis. Integrated into the Keiskamma Guernicas are local experiences of HIV/AIDS, recycled textiles and important cultural and religious traditions of the AmaXhosa. The powerful history of the fabrics used to create the Keiskamma Guernicas is significant: recycled materials are present in the form of sections of traditional Xhosa women’s skirts, as well as hand-made felt and traditional Xhosa beadwork; grey backgrounds are formed from the blankets used at the hospice established by Hofmeyr in Hamburg.

Hofmeyr has been involved in the design and composition of all the Keiskamma Guernicas.  Well known and respected in the Peddie region for both the formation of the Keiskamma Art Project and her medical work, Hofmeyr practiced in the area as a doctor through the height of the HIV/AIDS crisis and saw first-hand the impact of this health disaster:

Prior to the emergence of HIV/AIDS in our community the health service in rural Peddie was already inadequate and unjust. Babies died due to lack of transport to hospital, old men and women died of treatable conditions, drugs ran out in clinics and most people had no formal income. Add to this, an epidemic unlike any we have ever seen and a slow disaster tracks across an already damaged community. We have lived and worked in this situation for seven years and our artwork bears witness to this (2010). 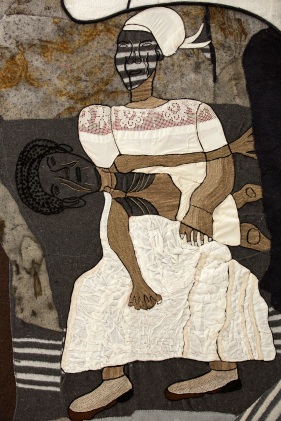 Nozeti Makhubalo worked on the first Keiskamma Guernica (2010) and designed several key shapes including the woman with the dying adult child on her lap. In an interview, she spoke about using the artwork as a way of expressing feelings in this terrible situation:

[L]ike the crying woman, we were voicing out. In all our tapestries, we are voicing out our pain to our government to help us and also we are teaching and giving hope to other people when their hope is down, so that they can see these challenges of death around our communities, but that there is hope, there is life. If you have the treatment, you are right and you can embroider and earn money and look after your kids; there’s no need to lose hope when you are HIV positive. So that’s why I’m saying we are giving people hope, although it is painful, but we are giving them hope and teaching those who are so scared that there is still life.

A common thread in all the reworkings of Guernica in the exhibition is the artistic opposition to governments that choose to sacrifice citizens in pursuit of private agendas. 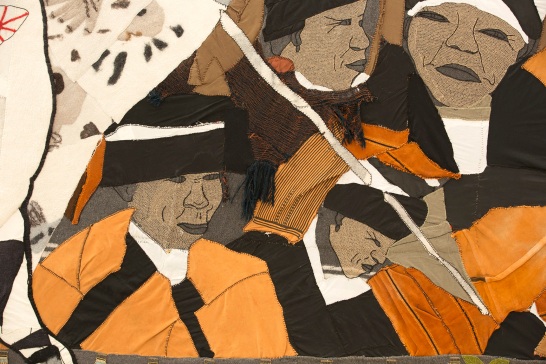 The Keiskamma Guernicas bear witness to pain and suffering as does Pablo Picasso’s painting Guernica (1937). They also position the viewer as witness to the atrocities within the image. For Picasso’s Guernica not only depicts suffering: it necessitates the viewer completes the scene by witnessing the aftermath of the market day bombing, eliciting compassion and solidarity. In the Keiskamma Guernicas the motifs and symbols used express a complex array of emotions focused on witnessing and enduring pain and misery caused by the HIV/AIDS epidemic. The grief of a mother is expressed through the woman cradling her lifeless adult child; the women gathered together in mourning at a funeral mark the loss of a son; running the length of the textile are the names of those who died at Hamburg’s hospice.

The names of those who died at the hospice in Hamburg, Keiskamma Guernica, 2010. Photographer Joe Hague.

These shapes are the lives and experiences of the people involved in the creation of the Keiskamma Guernicas. A form of empowered creative practice has developed, through the transformation of these painful and traumatic experiences, into a powerful collective remaking of Picasso’s Guernica that resists any complicity with government negligence.

For more information on the Guernica Remakings exhibition and the latest Keiskamma Guernica see: http://guernicaremakings.com/exhibition-2017/

Nicola Ashmore’s research interests focus on artistic interventions and curatorial practice, notably the means through which this can leverage collaborative activism. She is currently researching re-makings of Pablo Picasso’s Guernica, created collaboratively as a form of political activism. Dr Ashmore has lectured at the University of Brighton, College of Arts and Humanities since 2007 and continues to investigate and illuminate how meaning is constructed and held in material form to reveal local and global political issues.

– Update for October 2020: to find out about the Keiskamma Guernicas as part of the Guernica Remakings 2019 exhibition tour, see this link for the 55min tour documentary: http://guernicaremakings.com/guernica-remakings-north-with-south/
– Update for 2018: 12 x documentary films about the making of the fifth Keiskamma Guernica featured in the Guernica Remakings exhibition, curated by Nicola Ashmore: http://guernicaremakings.com/about-guernica-remakings-south-africa/

Like Loading...
‹ Familiar, yet utterly new: A Review of Fred Strydom’s The Inside Out Man
The Keiskamma Guernicas – (re)making experiences of HIV/AIDS in the Eastern Cape. 3 short films from ‘Guernica Remakings’ (1). ›