Home › Reviews & Spotlights on... › Familiar, yet utterly new: A Review of Fred Strydom’s The Inside Out Man

Familiar, yet utterly new: A Review of Fred Strydom’s The Inside Out Man 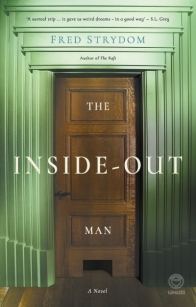 Bent is a gifted jazz pianist who plays in seedy nightclubs, lives in the “Crack Radisson”—a run-down flat in a Johannesburg suburb—and doesn’t seem to need much more in his life. With that deceptively simple scenario in place, the reader is drawn into this astounding book.

After a gig at one of the local pubs in which Bent plays, a well-dressed, tea-drinking man at the back summons him. Mr. Leonard Fry offers Bent R2,000,000 to play for one weekend-long party at his estate in the country. Following that weekend, Fry invites Bent once again to the mansion, which he describes as cursed. He tells Bent that the house is “like a filter. Anything that passes through here has its goodness removed, and the residue, what’s left—the distilled evil of a person, of an ambition, of a plan—is spat out its doors and into the world.”

Fry explains that he wants to lock himself in a room in the house for one year, as he has experienced everything life has to offer except the knowledge of his identity. He asks Bent:

He offers to give Bent access to his home and all it contains for a year on the condition that Bent place food through a hole in the door three times a day. There is to be no communication between them, and Bent is not to let Fry out of the room no matter how he begs. Despite Fry’s open admission that the house will suck the goodness out of everything, Bent has no other plans for the year, and accepts the offer almost casually.

This turn of events is the beginning of a psychological thriller that feels familiar, and yet is unlike anything I’ve read. The novel doesn’t hide its debt to the legend of Faust and Mephistopheles, though the bargain Bent strikes with Fry veers off that expected trajectory fairly quickly.

The book alludes to texts literary and popular: the psychology of Strange Case of Dr. Jekyll and Mr. Hyde; the claustrophobia of a Hitchcock film (which the author has acknowledged); the never-vanishing blood on Lady Macbeth’s hands; the ‘I wish I’d never been born’ premise of Frank Capra’s It’s a Wonderful Life. A strange film noir character lurks in the dark of gardens and bedrooms and disappears into the night before Bent can see him properly.

These allusions are not a hindrance; rather the layering of them works so well that the reader is aware of them without ever being distracted. They flow in and out of the work seamlessly, and it isn’t until the end that one puts it all together. 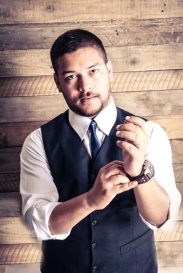 Bent himself is a prisoner, as is Fry, for it is Bent who must provide the man in the room with meals at regular intervals. He cannot so much as leave town for the weekend. The Inside-Out Man also alludes to some of the most well-known South African prison narratives. Strydom’s text certainly parallels The Jail Diary of Albie Sachs, and the dark, dry humour of both the situation and the characters evokes Herman Charles Bosman’s Cold Stone Jug.  Both allusions add further depth to a book that is already full of subtle meanings.

The beauty at the heart of the book is the writing itself. Strydom’s figures of speech are so new, so stunning, that the reader will see the most banal of images in an entirely original way.  Bent describes one of the nightclubs on his circuit. Strydom’s scene is familiar yet the sharp description renders it new: “As shitty and grotty as a place might be, what matters most is that it’s consistently shitty and grotty, and believe me, it will then live to rot another day.”

A patron at this bar “had a smirk stitched shut across his face, like the scar on Frankenstein’s monster’s forehead—the one that stopped its brains from falling out.” Page after page of this book yields brilliance like this. But like the reliance on allusion, these turns of phrase never feel clever. At no time does it feel as though Strydom is showing off. This is the way Bent thinks, and his diction adds a level of credibility to his character.

Neither Bent nor Leonard Fry are likable men. However, Strydom has drawn them so completely—so believably—that we cannot help but need to know how it turns out for them. I’ll stop there as it would be a grave sin to spoil this novel by saying anything more.

Kimmy Beach is a writer, editor, and mentor living in Alberta, Canada. Her sixth book is Nuala: A Fable (The University of Alberta Press, 2017). Visit her at kimmybeach.com

Fred Strydom studied Film and Media at the University of Cape Town. He has taught English in South Korea and has published a number of short stories. He currently works as a television writer and producer in Johannesburg, where he lives with his wife, three dogs, cat and horse. He tweets @FredSaidWrite. The Inside Out Man is available now from Penguin Random House.