The Keiskamma Guernicas – (re)making experiences of HIV/AIDS in the Eastern Cape. 3 short films from ‘Guernica Remakings’ (1).

This post continues our AiW series about the project and upcoming exhibition Guernica Remakings, curated by our Guest Author Dr Nicola Ashmore (University of Brighton, July 31 – August 23). The exhibition features visual artworks from across the globe that remake Pablo Picasso’s painting Guernica (1937) for political protests, and which resonate with the original intention of the work – “to push back at those in power who choose to act to the detriment of civilians”.

The exhibition will display an artwork commissioned for Guernica Remakings made by members of the Keiskamma Art Project, South Africa (2016-17). The textiles piece is the most recent of KAP’s five remakings to date of Picasso’s iconic painting, four of which have been commissioned internationally after the first, and largest, exhibited in 2010.

Each of the Keiskamma Guernicas tell the story of the impact of HIV/AIDS and challenge the ineffectual response of consecutive South African governments to its crisis in the Peddie region of the Eastern Cape.

For more information about these compassionate, hopeful, politically resistant Keiskamma Guernicas, their particular translations of Picasso’s painting, and links to the other reworkings that the Guernica Remakings exhibition sets them in dialogue with, see Nicola’s first post in our series here.

This is the first of three film posts accompanying Nicola’s AiW introduction to the project. These posts will each host a short documentary made during the Guernica Remakings project, through which the makers of the Keiskamma Guernicas voice their role in the making process.

I am Dr Nicola Ashmore, Senior Lecturer in the History of Art and Design at the University of Brighton. For five years, I have been researching remakings of Pablo Picasso’s protest painting, Guernica (1937), looking at its longevity and power as a focus for collaborative political activism through the visual arts.

In 2015, I conducted a series of trips to carry out archival research and interview people involved in collective remakings of Guernica. I visited London, UK; Hamburg in South Africa; New York in the USA; and Edmonton in Canada. These experiences were incredibly beneficial and fostered a deeper understanding of the materiality and physical context of these reworkings and I went on to script twelve short videos on these remakings of Guernica. I have screened a collection of these films at conferences in the UK and in South Africa, and recently submitted the three films made on the first and largest South African Keiskamma Guernica (2010), hosted here by Africa in Words, to the AHRC Research in Film Awards’ International Development Award: Mobilising Global Voices.

The Keiskamma Art Project has remade Picasso’s Guernica as a series of textile artworks a total of five times between 2010 and 2017. The first Keiskamma Guernica (2010) is a large-scale textile piece created at the same size and scale as Picasso’s original (7.8m x 3.5m); the other four are smaller, measuring approximately 2m in length by 1m in height (2011, 2012, 2015, and the one I was able to commission, 2017). The most recent Keiskamma Guernica, made in January 2017 with support from the AHRC’s Global Challenges Research Fund, will be on display as part of this summer’s exhibition. 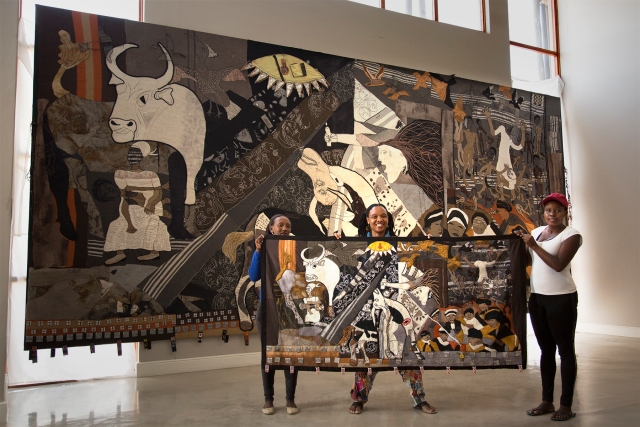 The creators are predominantly women from Hamburg and the surrounding villages in the Eastern Cape of South Africa. During my trips to South Africa (2015 and 2017), the makers were interviewed. In the documentary videos, the makers express in their own voices their role in the making process and their insights regarding the visual translation of Guernica to comment on the HIV/AIDS crisis in South Africa. They discuss their ideas and needs for change, creating their vision of the future.

This first film in the Keiskamma series reflects the experiences of making the first, to scale Guernica by members of the Keiskamma Art Project. In July 2015, I travelled to South Africa, to meet the makers. I went to the coastal village of Hamburg, the home of the Keiskamma Trust, where the Keiskamma river meets the Indian Ocean.

Here, I gained an insight into the workings of the Keiskamma Trust and its different areas of activity, which include Art, Health, Education, and Music. Spending time with people involved with the Trust in this way was a very powerful and moving experience.

I learnt about the activity carried out by the Trust in the Peddie District in the Eastern Cape to combat the suffering caused by the HIV / AIDS crisis. I saw how poverty impacts upon access to existing healthcare and the performance of the HIV medicines commonly known as ARV’s (antiretrovirals). Even when ARV’s are made available beyond the state provision, through private and NGO funding (facilitated in this case entirely through the Keiskamma Trust), some of these medicines need to be taken with meals: for too many in the area, amongst the poorest in South Africa, this is not a given.

In this first documentary film, Carol Hofmeyr, an artist and medical doctor, reflects on the development of the Keiskamma Art Project in the wake of the continuing impact of multiple losses effected by the Nationalist homeland policies, and the devastation wrought by successive government’s policies regarding HIV/AIDS in the area:

I saw this whole community without hope and quite depressed. My idea was maybe I could just start making art and they could make something and be quite proud of it. In the beginning it wasn’t income generation for them, it was, let them come together, make something, be proud of what they’ve made and get them to step out of the kind of hole that they’d got into…affecting this village and other areas in South Africa, particularly those that were in homeland areas [where] people had lost identity.

The making of the 2010 Keiskamma Guernica created an important opportunity to simultaneously voice pain and give hope, to those who are HIV positive and to those affected by the impact of the crisis.

Nicola Ashmore’s research interests focus on artistic interventions and curatorial practice, notably the means through which this can leverage collaborative activism. She is currently researching re-makings of Pablo Picasso’s Guernica, created collaboratively as a form of political activism. Dr Ashmore has lectured at the University of Brighton, College of Arts and Humanities since 2007 and continues to investigate and illuminate how meaning is constructed and held in material form to reveal local and global political issues.

Keiskamma Trust
We promote health and hope through art, music, HIV/AIDS treatment, poverty alleviation projects and education initiatives in the village of Hamburg and its surroundings in the Eastern Cape, South Africa.
Providing the only AIDS/HIV treatment in this area of South Africa, it currently has nearly 200 people on Anti-retroviral drugs.
Facebook page; and Twitter – @KeiskammaTrust.

– Update for October 2020: to find out about the Keiskamma Guernicas as part of the Guernica Remakings 2019 exhibition tour, see this link for the 55min tour documentary: http://guernicaremakings.com/guernica-remakings-north-with-south/
– Update for 2018: 12 x documentary films about the making of the fifth Keiskamma Guernica featured in the Guernica Remakings exhibition, curated by Nicola Ashmore: http://guernicaremakings.com/about-guernica-remakings-south-africa/