In other Words… AiW news and October’s wrap

As we move through the changed circumstances, timelines and spaces of now, we catch up on our monthly round-up of ‘other words’ – news on AiW’s radar, collated from across our social media… 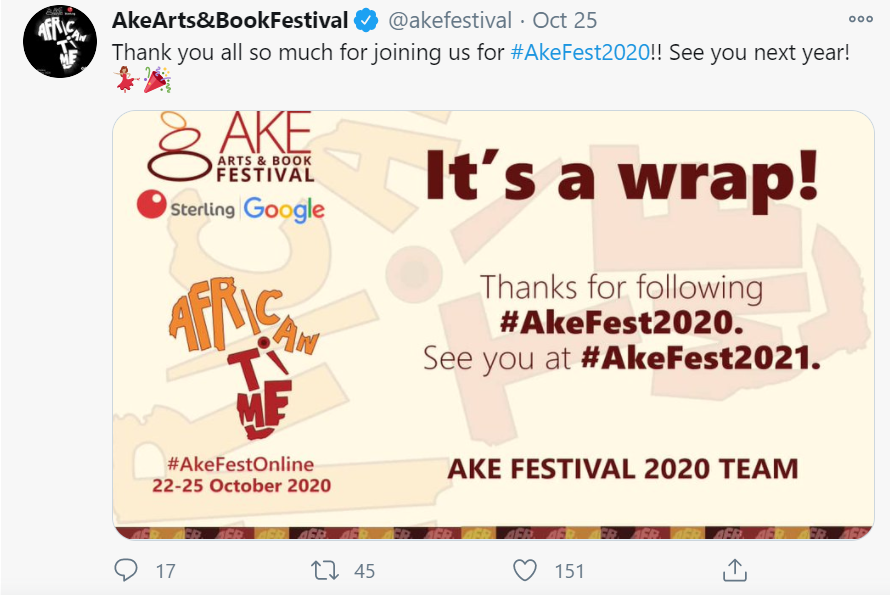 A detailed programme of this year’s Ake Arts and Book Festival, whose theme was African time, including events and guests, is available on the festival website. Read a review of The Smouldering Fires of Aké Arts & Book Festival 2019 here.

“Kayd means preservation in Somali language and seeks to promote arts, culture and heritage for the benefit of the public, including musical, literary, dramatic, performance, dance and visual arts as well as talks and workshops by organizing and delivering arts and cultural events and festivals. Since 2009, the flagship event by Kayd has been it’s annual Somali Week Festival, which is the largest Somali festival outside of the Somali Horn and takes place in the UK’s Black History Month in October each year.”

The FEMRITE literary week of activities also went online this October with a range of webinars, workshops and performances: 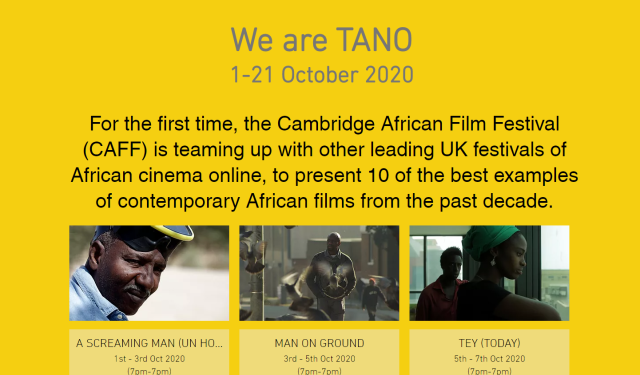 Visit the Cambridge African Film Festival website for a short history of the festival, the list of 10 features which have been most popular with audiences and Q&A sessions with filmmakers, and social media feeds for more news, clips and visuals.

The 3rd of 5 special blogs written for us by @UniofExeter staff & researchers to mark #BlackHistoryMonth. This time @ExeterEnglish lecturer @kate0wallis shares 7 incredible Black women who across 6 decades have shaped & changed the UK publishing industry https://t.co/IKFEaWQEfK pic.twitter.com/hR1ijTC7yH

Yes this is happening. Wole Soyinka’s First Novel in nearly half a century. The 524-page novel will be published by Bookcraft. #ChroniclesoftheHappiestPeopleonEarth

And from another venerable, Ngũgĩ wa Thiong’o’s new release, The Perfect Nine: The Epic of Gĩkũyũ and Mũmbi (first published in 2018) – a “dazzling, genre-defying novel in verse” – has received praise since out in its anglophone offering as of October 8th this year.

“Blending folklore, mythology and allegory, Ngugi wa Thiong’o chronicles the adventures of Gikuyu and Mumbi, and how their brave daughters became the matriarchs of the Gikuyu clans, in stunning verse, with all the epic elements of danger, humour and suspense.”

And if Elnathan John’s dulcet tones do what they do for Cassava … remember that for an indie press your PRE-ORDER means the world. You can pre-order here or from your favourite bookshop.

Listening to @elnathan_john reading @thando_mgqo's A Man Who is Not a Man has made us all fall in love with the book again. We can't wait to publish it in January. A 📖about the making of men through violence and its transcendence and tenderness, young love and hope. https://t.co/Km8ZpsFhLn

And for a free download of the first collection to engage directly with the idea of Africanfuturism – follow the links from Brittle Paper (and watch this space for reviews in the, ahem… future. Geddit?):

AFRICANFUTURISM: AN ANTHOLOGY, edited by Wole Talabi, is the first anthology to directly engage with the idea of #Africanfuturism. Download a copy for free and share it with your friends today! #BrittlePaperExclusive https://t.co/s9ae70ytFp

And tomorrow we add another milestone to our journey.

Issue 4: Worlds beyond this one…

And Sahifa, a new addition to an ever expanding literary publishing landscape, focused on the East African region, announced a call for its inaugural issue, ‘Futures and Dreams.’ 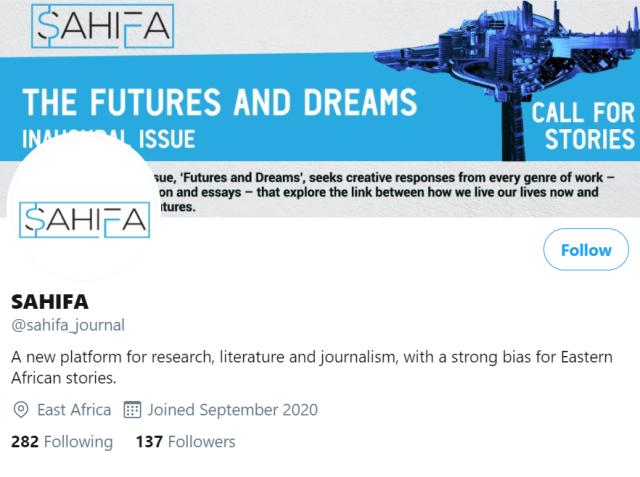 Five decades ago, You Hide Me Still, described as groundbreaking and controversial, was screened for the first time at The Africa Centre. The Africa Centre celebrated the fiftieth anniversary celebrations of this important film in partnership with SOAS and AFFORD.

“This documentary film by Ghanaian filmmaker, Kwate Nii Owoo, is a dramatisation of a visit to the British Museum by two Africans who discover African art, specifically Benin bronzes, hidden in the basement. An exposé of the policies of European colonial regimes which, in establishing their rule, attempted to wipe out all traces of African civilisation, religion, language, and art. It argues that materials collected in Africa and often hidden in the basements of European museums have been used against Africans as well as black people in the Caribbean, Europe, and the USA, making them look down on a rich cultural heritage. The film is held in the June Givanni Pan African Cinema Archive (JGPACA).” 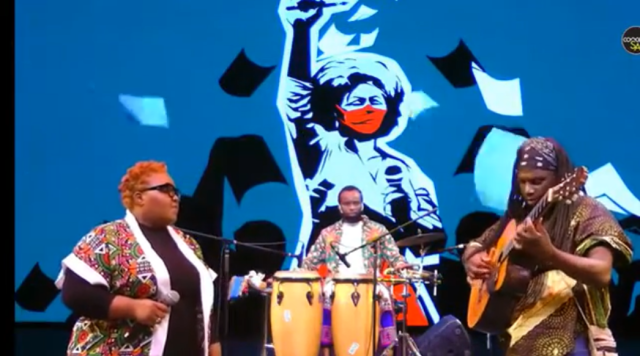 Listen to Tsitsi Dangarembga, award-winning and renowned Zimbabwean author, filmmaker and activist, whose book, This Mournable Body was shortlisted for the Booker prize, as she delivers the Oliver and Adelaide Tambo Memorial lecture.

“The Tambo name is synonymous with integrity, humility, selfless leadership, patriotism, courage and conviction. The Tambos dedicated their lives to the struggle for a democratic South Africa – one in which all would be treated as equals and reap the benefits of a free and fair democratic dispensation.”

“Narrative Futures is the capstone podcast project of the Futures Thinking network at TORCH. Devised, recorded and edited by Chelsea Haith, the Narrative Futures podcast features eight interviews with some of the mosts important authors and editors working in the the speculative genre today. At the end of each interview, novelist and creative writing tutor Louis Greenberg presents two writing prompts which are designed to support engaged thought and creative imagination about the interview and the listener’s own creative practice in narrative building.” Listen to Chelsea’s podcasts with Lauren Beukes, Mohale Mashigo, and Sami Shah here, here and here.

Congratulations 🎉 to all of those shortlisted for the Miles Morland Writing Scholarship @MilesMorland, including our very own Reviews Editor, Wesley Macheso @Wesleymax89 https://t.co/zli5PAmP2D

Earlier this year, we wrote about the many impacts of COVID-19 on writers’ “schedules and headspace” – how Wasafiri‘s acknowledgment of said impacts led to an extension of its deadline for the new writing prize. In early October, the fiction, life writing and poetry shortlists were announced:

“In choosing the shortlist for the prize, the judges commented that they were ‘looking for somebody who finds new words for old things.’ Aida Edemariam said, ‘I was looking for quality of insight, and a quality of noticing; a feeling that I’ve never looked at something in quite that way, but it feels true.’ Raymond Antrobus echoed, ‘You’re just looking for something that hasn’t been said in that way.’ Simon Prosser commented, ‘What I was looking for was that sense of surprise for the reader—when something is said in a new way or in a fresh voice, seen from a different perspective, or in a surprising light; when you feel a writer doing something special, with verve.'”

Congrats to Jackie Phamotse and Trevor Noah for their SA Book Awards 2020 wins, and to Kadiri Alex for his Quramo Writers’ Prize 2020 win.

Thank you all for reading, and for being here with us! As ever, if there’s anything you’d like to see featured on the site, don’t hesitate to get in touch. With all wishes for continuing health and safety, and creative power to you as we head through the remainder of 2020…

From El Saadawi’s essay ‘About Me in Africa – Politics and Religion in my Childhood’, featured among hundreds of other stories, essays and poems in the amazing anthology, New Daughters of Africa (@myriad_editions). https://www.instagram.com/p/CF7hvqZD2kX/ 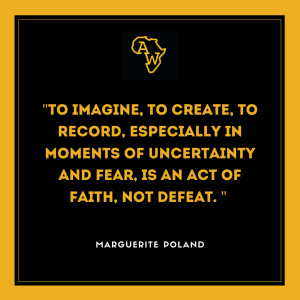 Today we begin our new series on the #KeiskammaArtProject and their ambitious C-19 tapestry response. This first post offers a beautiful preface to #Keiskamma’s newest endeavour, with author Marguerite Poland taking us through a brief history of the Eastern Cape region. Link is in our bio to this very special post, you do not want to miss it! https://www.instagram.com/p/CG0LfkFD6Aa/

Like Loading...
‹ Here’s My Body, Take it! A Review of Romeo Oriogun’s ‘A Sacrament of Bodies’
Q&A Words on the Times, Outriders Africa: Wanjiru Koinange ›