Home › Reviews & Spotlights on... › Here’s My Body, Take it! A Review of Romeo Oriogun’s ‘A Sacrament of Bodies’

Here’s My Body, Take it! A Review of Romeo Oriogun’s ‘A Sacrament of Bodies’

Romeo Oriogun’s Sacrament of Bodies (2020) opens with a quote from Kazim Ali that mourns, “in one place everyone looks like me – has my name – I am the most foreign”. This longing for belonging complements the title of the book and refutes the notion of the uniformity of human bodies. The quote exposes difference as a source of alienation and the reason some people are so uncomfortable with others that possess different ideologies, spiritualities and sexualities, treating some as within and others as without. But, just as a sacrament imparts grace, Oriogun’s poetry equally imparts grace on the different bodies we live in. 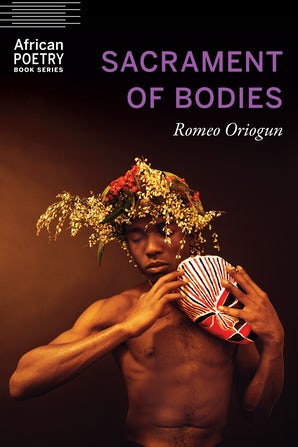 Sacrament of Bodies is published by Nebraska University Press

Sacraments are considered highly religious and immaculate rituals within religious spaces and, in the collection, the poet-persona carefully plays with this notion as he critiques the same institution that claims we are all equal under the eyes of a supreme being and yet forces those it deems ‘different’ to conform. This is extensively highlighted in the first poem when Oriogun describes how they were “[i]nstructed … to wash ourselves clean of desire” … “to be saved from what threatened to convert us into stone (p. 1). The poem exposes how religion often views different sexualities as sin that requires ablution for one to be saved. The poem continues to draw unto religious lingo – with references to cathedral, sermon, Kumbaya, Satan and God – notions that provide thought provoking debates about the double standards characteristic of religion which preaches love on the one hand and dehumanizing exclusion on the other.

Considering that religion affects social construction and vice versa, the author unmasks the horror of discrimination and to how most families fail to accept the sexuality of their queer relatives or children. The denial of homosexuality even leads to some families regarding their gay relatives as already dead. Oriogun explores how these gay people are beaten and forced into heterosexual sex or rape in order “correct” their sexuality so that they can be ‘saved’. The persona in “Boy”, relays this traumatizing experience:

Some of the poems reveal that society further aggravates this hostility by engaging in violent acts such as burning and lynching gay people, yet they are the perpetrators of these hate crimes are the same people who preach the love all men as Christ loved us. “Kumbaya”, “Departed” and “Elegy for a Burnt Friend” use words that leave the reader visualizing pain, despair, and broken souls because not even God can save the victims. The pain of queer victimization is vividly expressed in “Sermon of Pain”.

Speaking of despair, the collection lets us in on the anguish one feels when they cannot get the love they deserve or the freedom and pleasure that they long for. They are forced to hide because running is the only way to stay alive, there is no justice for queer people and some homophobic sects of society think imprisonment is too little of a punishment. Although the persona draws more on Nigeria, the experiences in the poems apply to most African countries that do not want to have this conversation in the interest of justice. The persona also brings to light an interesting irony of how the same people who enforce the oppressive laws are guilty of the same pleasure. Poems such as “Saddest Night Alive”, “Departure”, and “Coming Out” document the anguish of longing for love but holding yourself back because you are afraid of someone who may not understand what your kind of love is. And yet, when the play bursts into its erotic moments, such as in “Cathedral of Bodies”, you feel the passion that often becomes a sweet release after the tension of holding everything back. 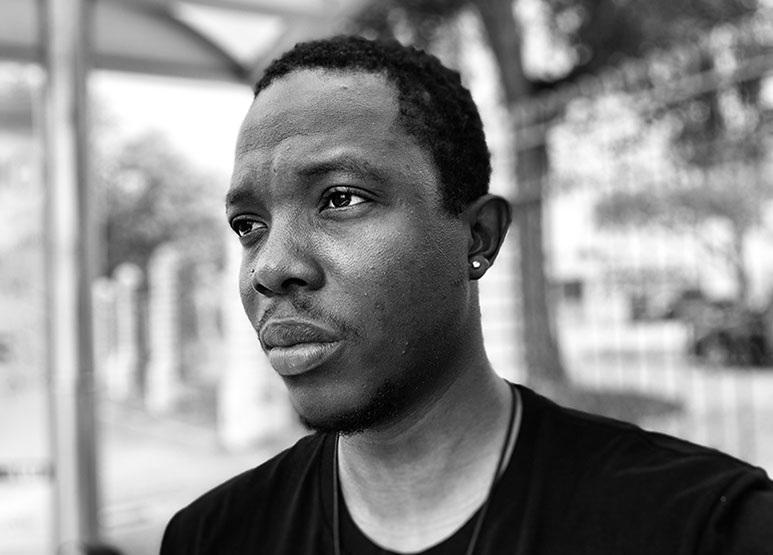 However, due to the vulnerability of queerness in the repressive contexts where the poems are set, those moments are short- lived and leave the persona seeking the freedom to be in his body and be loved as they are. The recurrent images of rain and water attest to such longing, quenching and soothing. In “Kumbaya” and “Elegy of a Burnt Friend” the persona wishes to become a soothing song just like rain (p. 8) and “to wash our body in water and become free” (p. 11). However, even when the persona finds his freedom by migrating to Western countries like many African queers do, he is still not happy since such freedom is still limited (who said a bird singing in a cage is happy because it sings?).

In Sacrament of Bodies, there is frequent mention of alcohol, which probably helps create temporal euphoria and amnesia for the persona. While wallowing in the strong drink as opium, the persona yearns for everyone in the world, especially in Africa where most people still think queer sexualities are evil, to identify with his distress, alienation and need for belonging. The fact that state authorities, traditional culture, and religion in these African contexts work together to marginalize queer identities, renders such lives vulnerable and at risk of violence. The frustration in these alienated identities leads to depression; to the rose killing its own stem with its thorns.

Furthermore, the persona also brings to light issues of creating stereotypes in identity construction for queers; the idea that queers ought to be exhilarated about or pursuing a career in fashion. It can be argued that most gay people are expected to be very fashion forward; either own a brand, be a model or work somewhat within the vogue space. In “At Udi” the persona makes it clear that this is not the kind of freedom that he wants:

If we want everyone to be free in their bodies, then true freedom ought not to come with specifics. The fact that the persona can boldly bring out such unpopular opinion is very powerful and such sentiments have the power to spur very insightful debates.

Oriogun’s poetry collection emphasizes how “[y]ou can never force home into a body already home”. He indicts mainstream society for its idea of home and bodies which has not been very inclusive. He therefore articulates bottlenecks of coming out – such as stereotypes from family and friends – and the role religion plays in fueling hate, forcing homes into bodies they do not belong in. He further explores the psychological dimensions of living through it all; the pain, loss, longing and fulfillment. The pain, supplication and anger are what make the collection a very personal and emotional read and a strong tool for activism. In African poetry, where queer poetry still appears on the margins, Sacrament of Bodies harnesses the expression and truth that appeals to those of us who feel the need to shout and have raw conversations about the rights of queer people.

Romeo Oriogun was born in Lagos, Nigeria. He is the author of the chapbooks Burnt Men, The Origin of Butterflies, and Museum of Silence. He was the winner of the 2017 Brunel International African Prize and has received fellowships from Harvard University’s English Department, the IIE-Artist Protection Fund, Oregon Institute for Creative Research, and the Hutchins Institute of African and African American Research. He lives in Iowa, where he is an MFA candidate for poetry at the Iowa Writers’ Workshop. You can follow Oriogun on Twitter @SonOfOlokun.

Tikondwe Kaphagawani Chimkowola is a passionate 23-year-old SRHR and Gender Advocate/writer currently living in Malawi. As a curious myth-buster, she initiates conversations that question myths and misconceptions regarding young people’s sexuality and leveraging the controversies emanating from cultural debates. She has worked with organisations such as She Decides, SRHR Africa Trust, International Youth Alliance for Family Planning, African Union and the Gender and Justice Legal Clinic working on issues ranging from Menstrual Health Management using low-tech approaches, Advocacy for Youth Development and Sexual Reproductive Health Policies. She has also worked in the civil service; working in departments of Family Nutrition and HIV/AIDS, Gender Affairs and Social Welfare in the Ministry of Gender, Children, Disability and Social Welfare. She is an alumnus of the University of Malawi with a BA-Humanities degree in English Literature and Philosophy.