Home › Prizes › From the ‘African Booker’ to ‘The Booker’: NoViolet Bulawayo’s ‘We Need New Names’

From the ‘African Booker’ to ‘The Booker’: NoViolet Bulawayo’s ‘We Need New Names’ 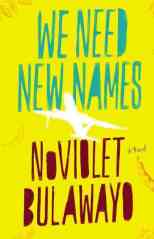 NoViolet Bulawayo’s debut novel We Need New Names ends its first and last chapters with the same sensory detail: the alternately ‘dizzying’ and ‘delicious’ smell of Lobels bread. It is a smell that wafts through otherwise macabre scenes. In the first, a woman hangs dead in a tree and the smell is only imagined, as Darling (our narrator) and her young friends anticipate with delirious joy the bread they will buy by selling the dead woman’s shoes. In the last, it is a real, overwhelmingly delicious smell that accompanies the death of something that the children were looking for and wanted desperately to find. In the simple smell of fresh-baked bread we find joy, hope, death, desire. The magic of Bulawayo’s writing is in small, razor-sharp details like these that echo and collide with one another throughout the text – setting it on fire.

Names was recently long-listed for the Man Booker Prize, and if Bulawayo wins, she will be the first Zimbabwean and fourth African writer to do so. The novel extends the story of Darling and her friends, who live in a shantytown called Paradise. We first met this gang of children in Bulawayo’s story ‘Hitting Budapest’, which won the Caine Prize – often referred to as the ‘African Booker’. In 2011, the year Bulawayo won, concerns were raised about whether the prize promotes (unwittingly or not) a specific kind of narrative, sometimes referred to as ‘poverty porn’, that reinforces rather than helps to nuance certain stereotypes of Africa. One of the characters in Bulawayo’s story, Chipo, impregnated by her grandfather at the age of ten, was often referenced.

Names gives more breadth and depth to Darling’s and her friends’ stories, with its first half set in Paradise and the second in Detroit, Michigan, where Darling moves to live with her Aunt. Although Bulawayo’s novel had been in progress for several years when she won the Caine (in other words, it did not grow directly out of her story), it provides an interesting test-case for what happens when stories perceived to be of a ‘Caine prize genre’ are extended into longer works and brought to wider audiences. Overall, the novel has received very favorable reviews, even by some who were initially frustrated by the narrow themes of ‘Budapest’. However, fellow Caine prizewinner Helon Habila has offered a more critical review, suggesting that the novel reads as though Bulawayo were checking off a list of stereotypes ‘made from the morning’s news on Africa’. Habila concedes that the expanded form of the novel affords the narrative some moments of ‘thematic transcendence’, but perhaps not enough ‘to transport us beyond the headlines’, as he believes literature should.

While Names deals overtly with many stereotypes of both Africa and America, I think these stereotypes (and their excess) are meant to make us anxious, to make us think about the process of stereotyping and our own complicity in it (even Darling, watching the BBC in America to understand what is happening at home, is complicit in the end). Looking carefully at some of the slight alterations that Bulawayo made to ‘Budapest’ when she turned it into the first chapter of her novel, we see a kind of challenge to those have who have accused Bulawayo and other African writers of producing ‘poverty porn’ to achieve international recognition. In both versions, the same scenario unfolds: Darling and her friends encounter a 30-something British woman in the wealthy neighborhood of Budapest, where they go to steal guavas. The woman—who is visiting her ‘dad’s country’ for the first time—throws away food without asking the children if they want it and then takes numerous pictures of them. Fed up, the children walk away, shouting at her. In the novel’s new version, the woman, who now wears a glittering charm in the shape of Africa around her neck, commands the children to strike certain poses as she photographs them (‘you, with the missing teeth, look at me, like this’). And when Darling and her friends shout at the woman, it is no longer until they are ‘hoarse’ and their ‘throats itch’, but until they ‘smell blood in [their] tickling throats’.

While the novel’s larger canvas allows for such self-reflexivity of form, the tradeoff is that some of its frighteningly sharp images are lost – such as the quiet symmetry of the bare feet of the British woman and the woman hanging dead in the tree, whose shoes the children steal. One act of disrespect is met with another: the first done out of boredom and ignorance, the second out of desperate need. Images such as this, which struck me in ‘Budapest’, are simply harder to keep track of in the novel than in the short story’s compressed form. Some reviewers have suggested that Names reads as a string of short stories. I agree, but in this case I think it’s best to read the entire novel in a ‘single sitting’, as Poe suggested we must read short stories, in order to fully appreciate its dizzying and delicious richness.