I had never crossed the border to the neighbouring Uganda, even though our home is very close to the Kenya-Uganda Busia border. The idea of crossing into what has always been there yet unexplored, resonated in many ways with the theme of the AMLA (Arts Managers and Literary Activists) workshop which was held in Kampala between 15th and 18th August 2018 and focused around literary activism. In particular, the emphasis on the role of literary festivals, spoken word nights, translation initiatives to mobile libraries and book distribution outlets piqued my interest.

My own PhD research had long yearned for, played with and anticipated a kind of activistic move in its method of engaging with environments outside the text. The set of texts I explored refused to be read in the space of the text and invited analysis from archival sources and other spaces without. AMLA’s theme offered me the possibility of breaking away from traditional literary perspective of the printed text. The ready data for the literary scholar was now transformed into new ways of exploring literature through the forces shaping its production and circulation. Just like the neighbouring Uganda that I had never visited, this had always existed beside the literary text, and yet has been less explored by literary scholars.

Temitayo Olofinlua is currently a PhD student at the Insitute of African Studies, University of Ibadan, as well as an award-winning creative writer and editor. Temitayo was also one of the delegates at the AMLA Academic Writing Workshop, working on an article about book distribution in Nigeria. Following on from being interviewed by Tadiwa Madenga for Africa in Words about my own experiences at the workshop, I was able to continue the chain of conversation by interviewing Temitayo. I spoke with her about her research, her own practical experience of working in book distribution, her creative writing and visiting Uganda for the first time.

Serah Kasembili: What attracted you to the AMLA Academic Writing Workshop in Kampala?

Temitayo Olofinlua: Before I saw the call for the academic workshop, I’d not heard about AMLA or the work they do. I knew of Writivism but never connected the two. I saw the call for papers online and it was the perfect opportunity for two things. Firstly, to write an academic paper on a topic that I have always wondered about: the impact of digital technologies on books and book distribution in Nigeria. I knew that there was some form of change or revolution happening but it seemed that it was not being recorded. Knowing the nature of activities that happen online – once they disappear, they fizzle into thin air and become difficult to find – I found it necessary to do so. Second, it presented an opportunity to speak with like-minded individuals within the academic sphere about their personal journeys while working on this academic paper idea. AMLA met these needs, and continues to do so, even as I type.

You are a creative writer who is now putting your pen in academic writing. Do you feel you have to use two different pens?

While it is easy to say, ‘they are both just forms of writing, no?’, academic writing and creative writing are so different from one another. Words are used in different ways. As a creative writer, you are a small god, creating characters and killing them at will. However, as a young academic writer, you realise that you are merely a worshipper, a conduit for expressing a particular idea. In fact, there are several ‘gods’ in the field that you must pay obeisance to by citing their works correctly, by learning from what they have written, by situating your work in an already existing global conversation: small sacrificial offerings. Whereas for creative writing, the story exists in your head, for academic writing, there is a deliberateness and rigour associated with it. The writing styles for both forms of writing are so different but I am learning. At AMLA, exposure to different forms of academic writing took me out of the restrictive box I used to put myself in. So, perhaps, there are ways that creative writing can give academic writing a handshake. I am trying to make that happen. It is comforting to know that I can straddle both spaces. I am learning how to do it every day. 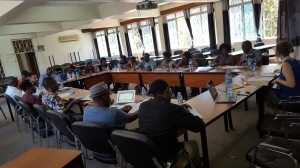 Would you say your previous work as a literary producer and current academic work complement each other?

This is like asking a mother of twins: do you think that your children are like you in any way? My work as a literary producer is interesting because it traverses several spaces including writing and editing. I was also once a book publicist for a writers collective in Nigeria called JALAA. Only few days ago, I came across a sheet of paper where I wrote the many grand things I wanted to do in the literary sphere, particularly with reference to book distribution. But life happened and here I am, still working on an academic paper on the same theme. I think that once something bothers me, it finds a way of flowing into several things that I do and hence the reason that this distribution question has lived in my head for over a decade. And so much is happening within that space now that needs to be recorded because, more than anything else, the internet is a fickle thing: a lesson learned the hard way when Next Newspapers disappeared with all the amazing work it did.

You worked to distribute Farafina Magazine. Did this inspire the research you presented at AMLA? What was the beginning point?

Most of the work I have done has revolved around the literary world. My first job was as an editorial assistant at Kachifo Limited where I did everything including distributing Farafina magazine at stores across Lagos Island. Through that I learned of the many challenges of book distribution, first hand. This was around 2008 and 2009. It involved manually going around on a bike to distribute magazines at shops in Lagos and also ensuring that they were distributed to subscribers.

At this time, I also co-ran a blog called The Bookaholic Blog and worked as non-fiction editor for Saraba magazine while I freelanced as a writer at the now defunct Next Newspapers. I was young and did everything  ̶  not as if I am so grey now! It was a time when amazing things were happening in the literary world  ̶  publishing houses were being born, the arts and culture review sections of newspapers came alive, and African writers were being read more globally. Here I was, a young graduate in the middle of it all, with my first job at one of the leading publishing houses on the continent at the time. From our office, we sourced writers for the magazine, read beautiful writing from across the continent in the slush pile … yet, we were faced with this distribution challenge.

With increasing internet access, the way book distribution/literature/writing worked began to change and I became interested in that and started writing about it. I considered working on it for my PhD. However, I could not get an interested supervisor in the Department of English at my preferred university. As an alternative, I veered into something similar, this time African Studies –  specifically social media and politics, which is what my PhD is currently focused on. Meanwhile, I still work full-time as a writer, editor and what I call general content busybody. I still need my job to pay for the PhD.  So, when the AMLA workshop came up, I polished up my old proposal, did some of the research and presented it. Even that now has taken another interesting shape but I am enjoying the journey.

AMLA brought together early career researchers of African Literary and Cultural Studies based on the African continent, including those working on or through African cultural history, performance, literatures, music, visual cultures, gender, media and technology, creative industries, world literature and postcolonial studies. Particular emphasis was placed on Africa’s myriad modes of literary activism from literary festivals to spoken word nights; translation initiatives to mobile libraries and book distribution outlets; podcasting and social media to small magazines and print books.  How did you approach AMLA’s theme of literary activism? How did this resonate with your research and work?

I was not quite thinking about ‘literary activism’ in that sense of the phrase when I applied, because I never quite saw it as a form of activism until the workshop. However, throughout the workshop, it became quite important to me the significance of the ‘thankless’ work that literary producers are doing across Africa and how and why it is important to have such work documented. Once upon a time, our literature and history were largely of an oral tradition, and so there was the excuse of lack of records. We have no such excuse now. Much more than recording, it is important for the work to be supported, to thrive, to have impact. That is why the work that AMLA is doing is of significance. For, to what end is it activism if it does not change anything? If it does not have any impact, or break and create new systems?

Did coming to Kampala from Nigeria (the travel, different geographical location, different culture, meeting new scholars) ignite your research in any particular way?

It did in so many interesting ways. It was my first time in East Africa. I will write about that experience after this interview. It was a great opportunity to meet other Africans (researchers and literary activists) doing amazing work across the continent. It was also my first time meeting an interesting mix of people from different parts of the continent; so, now I have friends from Zambia, Kenya, Zimbabwe, Tanzania, something that may not have been possible without the workshop. We had conversations on the literary landscapes in their different countries. Much more than the academic training and lessons, these conversations, these people and all that they represent made my experience in Kampala special.

Did AMLA open up for you any opportunities for new collaborations and conversations?

I am not sure I see them as collaborations now, but more like conversations. I have learned about the amazing work – research and literary activism – happening on the continent. It has also opened up doors of connections with people. So many people who I never knew six months ago are an email away, what a thrilling thing! That gives room for not only conversations to thrive but could open doors to future collaborations. And I love collaborations!

Serah Namulisa Kasembeli has a PhD in English Studies from Stellenbosch University. She is interested in Indian Ocean Studies, Indian Ocean slavery, historical erasure and invisibility. Her current research focuses on the haunting trope resultant from repressed slave historical pasts. She reads the concepts of the archive, memory, trauma, haunting and spectrality in post-apartheid literature.

The AMLA Academic Writing Workshop brought together 15 early career researchers of African Literary and Cultural Studies in Kampala between 15 and 18 August 2018. It ran alongside the annual AMLA Fellowship for literary producers and ahead of the 2018 Writivism Festival. Funded by the British Academy, the workshop was designed and organised as a part of a collaboration between the Arts Managers and Literary Activists (AMLA) Network, the journal Eastern African Literary and Cultural Studies (EALCS), University of Exeter and University of Bristol. This is the third in a series of interviews coming out of the workshop. Read the first two interviews here: