Before I travelled to Kampala, I found myself shockingly motivated to finish writing an academic paper. I had just moved from Boston to Brooklyn for the summer, and in that transition, a once tedious essay felt more like a genre to explore than a painful assignment for my PhD. Removed from a place where I was constantly sleep deprived and living off midnight snacks, I wrote in rented rooms and unfamiliar parks, finally letting go of rigid ideas of what a scholarly paper should be.

By the time I arrived in Kampala, I was thinking about how academic writing is shaped by noise, conversations, Airbnbs and hotel lobbies. What could the excitement and discomfort of visiting a new city contribute to the way people think about producing scholarship? The AMLA (Arts Management and Literary Activism) Academic Writing Workshop highlighted this. On the one hand, the workshop was an intensive four days that focused on the process of writing and discussing journal articles around the theme of literary activism. But the experience of living in Acacia City Hotel or Modest Inn surrounded by arts managers, writers, and scholars visiting Kampala for the AMLA workshops or the Writivism festival was just as influential to how people were approaching the idea of literary activism. As everyone adjusted to the new food and slightly cold weather, an unavoidable topic of formal and casual conversation was the way in which academic writing is shaped not only by where a scholar goes geographically, but also how their body adapts to their environment.

One of the AMLA Academic Writing Workshop participants was Tinashe Mushakavanhu.  A writer and editor from Zimbabwe, Tinashe holds a PhD in English from the University of Kent and was part of the team that founded readingzimbabwe.com. I was already familiar with his writing before we met in Kampala.  Mushakavanhu has a versatile approach to scholarly work through various forms like maps, poetry magazines, and digital archives that offer new ways to think about knowledge production. I spoke with him about his project readingzimbabwe.com, the tension between writing as a scholar and as a curator, and how he is transforming the experience of building a digital archive into a journal article.

Tadiwa Madenga: What inspired your essay? Where did you get the idea from? 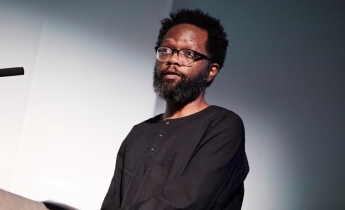 readingzimbabwe.com started more as a drunk conversation between Zimbabwean friends in Brooklyn. We were arguing about who is a Zimbabwean writer and who is not a Zimbabwean writer. And I just decided that I wanted to start a list of books about Zimbabwe. The list grew, and that data has been revealing interesting patterns and trends. But the fascinating thing is also about how we have been mapping knowledge production about Zimbabwe from a global perspective. We are stretching. It starts inwardly and starts extending to the rest of the world. That’s how the project is set up. So right now there are about 1900 books on the site that are listed and they have been published in 140 cities across the world. There is a fascination about where knowledge production about Zimbabwe is happening. So the virtual repatriation part is making visible material that is increasingly hidden.

The largest casualty of the whole thing though is literature in the vernacular because of the readership. Because the reach is very specifically targeted to Shona and Ndebele speakers in Zimbabwe, there’s no attempt to digitize vernacular literature. I think that is in the greatest danger of disappearance. So for me that is very worrying. When I go back to Zimbabwe itself, very little new vernacular literature has been published in the last 20 years. So apart from Ignatius Mabasa, Tinashe Muchuri, Memory Chirere, there’s been very little production of literature in the vernacular. And there are other variables to that. Vernacular literature doesn’t get you international residencies. It doesn’t get you invitations to festivals. So all of a sudden people are willing to gamble with English because they want all these opportunities. 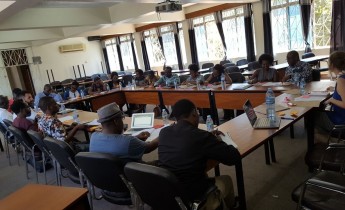 So with your writing process, how developed was your essay before the AMLA Academic Writing Workshop? How has your experience been in terms of these workshops and the environment?

I think it was useful. My struggle with the essay before I came to the workshop was that I was writing as a practitioner and not necessarily as an academic, because what I wanted to articulate were things that I learned from putting together this virtual archive. So there was a struggle and the draft that I submitted for the workshop had those tensions between practitioner and academic. And so, coming here for the workshop, I think part of the feedback was to make a decisive choice –  whether to write as a practitioner or to write as an academic. I think I’ll do both. I think there are a lot of lessons I’ve learned as a practitioner that should be conveyed in that form of an academic paper. I think the practitioner and the writer in me will inform the decisions I make in the paper, like how to problematize how we think of intellectual history, of Zimbabwean intellectual histories, Zimbabwean intellectual genealogies, or the relationship between politics and intellectualism in Zimbabwe.

What has your experience of Kampala been? I was wondering if working in a city you haven’t been to before has influenced how you are writing your paper. It’s also one thing when you are working on your paper at Makerere University in a conference room, and another when you’re moving around the city.

I think out of all mega African cities, Kampala occupied a very special place in my heart. So for me, coming here was a kind of pilgrimage to a place where we can locate the beginning of what we call African literature. So in that purely intellectual sense, I just wanted to be in Kampala to breathe the air of Kampala, to drink the water in Kampala, to see what about it excited the African imagination.

I think because I work on a very specific project about a specific place, it’s been interesting to take myself away from that place and read it from a distance. Kampala has been expanded by sensibilities about city and space and movement in a way that gives me a fresh perspective on Harare, a place that I was born in and grew up in. I tried to open myself up to some sort of surprises. I didn’t come with set ideas of what Kampala should be. I was willing to be surprised and to learn.

I think it’s been a productive experience for me beyond the workshop, beyond the festival, beyond the networking. At a deep, personal level, I think it’s an experience that has challenged me. I have spent so much time in Zim, but when you spend so much time preoccupied with a place like Zim and its problems you see yourself in a particular way. I suddenly realized in Kampala that I have been pitching myself lower than I should. So I go back with a different kind of urgency in terms of the things I want to achieve. I’m going to shift the gear.

Is there anyone’s project that you find particularly interesting either from the early career researchers taking part in the AMLA writing workshop or the literary producers that make up the AMLA fellows?

I think I’ve been fascinated with everyone working on some kind of publication. A part of me has been preoccupied with the idea of literary magazines, not necessarily just for Zimbabwe but Africa-wide. Transition magazine has been a part of my life. I have anniversary issues of Transition so I know its history very well. I’m fascinated with new forms of thinking about literary magazines so it was interesting meeting Dami Ajayi and talking about Saraba and revisiting old conversations with Billy Kahora from Kwani. But I’ve also been interested in new forms of publishing – like the Libros agency –  was fascinating for me; it just shifted my sensibility of publishing. I still like the paperback, I still love the hardback, but Giovanni Patrick just decided that Libros will focus on ebooks by young writers in the 21st century or books by millennials. That was fascinating for me. I was also fascinated with Peter Nawa’s project trying to republish old classics from Zambia with Butali House. There are so many intersections and I think all the projects here are speaking to each other. They are all doing the same thing. They are recovering. They are extending discourses and dialogues. These are all things that I am preoccupied with in my enterprise as a writer, as a scholar.

I’m also interested in space, in physical space, so, coming to The Square for the Writivism Festival. We don’t have a space quite like this in Harare, and I’m interested in space and creative conversations. So in that regard, I was happy to meet Shadreck Chikoti from Malawi who’s invested himself in operating spaces in Malawi that host book launches and all kinds of things. I’m definitely inspired to go to Lusaka and Lilongwe imminently to continue the conversations started in Kampala!

Tadiwa Madenga is a PhD student in the African and African American Studies department at Harvard University with a primary field in English.  She worked as Assistant Producer for the 2018 AMLA academic writing and fellows workshops.

The AMLA Academic Writing Workshop brought together 15 early career researchers of African Literary and Cultural Studies in Kampala between 15th and 18th August.  It ran alongside the annual AMLA Fellowship for literary producers and ahead of the 2018 Writivism Festival.  Funded by the British Academy, the workshop was designed and organised as part of a collaboration between the Arts Managers and Literary Activists (AMLA) Network, the journal Eastern African Literary and Cultural Studies (EALCS), University of Exeter and University of Bristol.