We are pleased to share the news from Modjaji Books that a new edition (the fifth) of the African Small Publishers’ Catalogue is in production and will be available in July 2021.

There’s still time and space to list in the catalogue – and not only for independent publishers; there’s room for the gamut of other roles that support and hold up the industry too – Modjaji’s deadline for receiving all new listings is the end of March 2021. 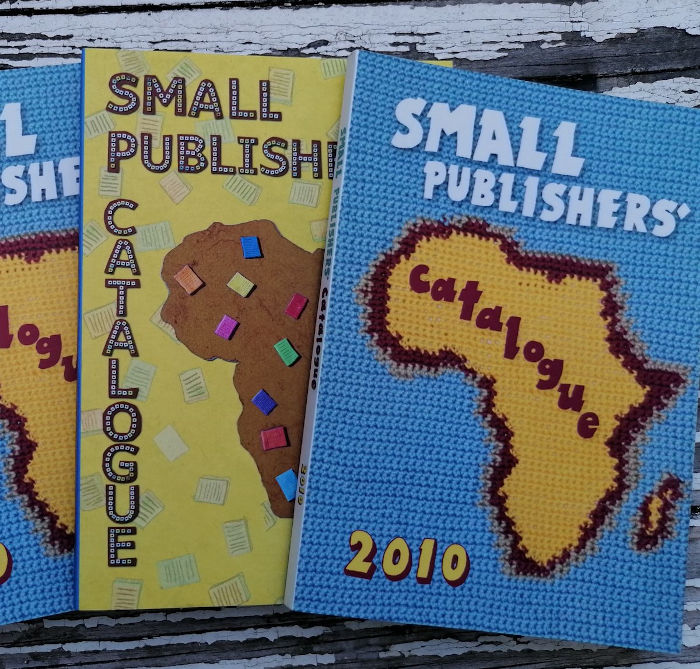 If you are a small or independent publisher in Africa and would like to be listed in the 2021 edition, you can contact us at info@modjajibooks.co.za. The catalogue reaches important people and players in the book world both locally and internationally. It’s a way of making your company more visible and thus more likely to be offered opportunities that you didn’t even know existed.

There is also a place for editors, proofreaders, audiobooks, specialist libraries, booksellers, printers, and others who want to either be included in the classified ads or larger adverts to participate. You can email info@modjajibooks.co.za for more information.

You can also take out advertising as a way of supporting this project; email us for the rate card.

Since its inception, the African Small Publishers’ Catalogue has given space and visibility to the small independents of our books industry and community, including  articles of advice for writers, and wisdom of experience-sharing in terms of difficulties and challenges overcome:

While at the Centre for the Book in Cape Town, Colleen Higgs and Maire Fisher compiled  and edited the first Small Publishers’ Catalogue – listing as many of the small publishers in  South Africa as possible. Once Higgs founded Modjaji Books, she decided to pick up that  passion project and expand it into the African Small Publishers’ Catalogue, listing small and  independent publishers from all over the continent. Each edition became more  comprehensive, including not only lists of publishers but also advice for writers and articles on how publishers overcome limitations on cost, literacy, and access.

If you want to list, do get in touch in Modjaji. Otherwise, please look out for the release of the catalogue in July – in this uncertain period, there is much work going on that gives cause for celebration and these holding hands extended in support.

In the run-up to the publication of the fifth edition, we’d also like to share with you again a selection of posts from our archive in our #PastAndPresent series, featuring previous editions of the catalogue (so you can get a sense of what they do and how).

We also have insights into the small press behind it all, Modjaji Books, and from conversations with editor and compiler, Colleen Higgs. NB – Modjaji is a press that publishes books by those identifying as women writers but you need not identify as such to list or feature in the African Small Publishers’ catalogue.

Perhaps the definition of a text that does its job well, it’s difficult to say anything about it that isn’t in the publication itself – it’s a hugely useful resource for anyone who cares about the invaluable contribution small publishing and independent publishing makes to literary culture in Africa – all those that Colleen Higgs (compiler, editor and driving force behind the Small Publishers’ Catalogue and South Africa based small publisher Modjaji Books) thanks as she introduces the Catalogue on Modjaji’s blog.

And excitement on the release of the 2016 edition:

Reviewing the one in 2013, we agreed with Publishing Perspectives that it was ‘a beauty’ – and the very definition of something that does its job well: much more than the sum of its parts, it’s also a resource guide for writers, readers, sellers and the links across the book-chain for information and articles on the life of the book. There are plans with this one for an accompanying website of African small publishers to keep the information current too.

In this 2013 Q&A, Higgs discusses her experiences of running Modjaji, a small independent press based in South Africa, and making rain for women writers from Southern Africa:

But at the same time, I do have an activist sensibility. Very often women’s voices and experiences are sidelined.  And Modjaji is able to publish things that don’t fit into well set commercial genres.

And as the pandemic hit last year, Modjaji were set to celebrate another publishing milestone with the release of two celebratory anthologies – The Only Magic We Know: Selected Modjaji Poems 2004 to 2019 and Fool’s Gold: Selected Short Stories – poems and short stories, both forms championed by the press over the years despite market concerns.

In her Words on the Times, an AiW Q&A set established to connect us up through our changing experiences of the pandemic, Higgs spoke about productivity, surviving what she labeled the #COVOID for books as a small publisher and writer herself, and her upcoming memoir, which explores aging and caring for an aging parent.

AiW: What have you found most supportive and/or heart lifting in this time?

CH: Writing with my friend using Zoom has sustained me. Every day we log on to say hi and to catch up. Then one of us reads a poem. We switch Zoom off and write for 20 minutes. Then we go back to Zoom and read our writing to each other. We take a few minutes to discuss the writing or anything else that arises and then we go back to our lives under lockdown.

I’ve enjoyed the memes and short videos that people have made to entertain themselves and others. It is good to laugh, even as we live through the pandemic. In South Africa it is particularly difficult as many people have been suffering and been hungry. And the repression by the police has been particularly brutal in some cases. None of this is easy to live with. I’ve been inspired by the courage of the front line medical people, and all of those delivering essential services, making sure we can buy food, get our meds, keep the lights on (in South Africa with our beleaugured energy utility company, ESKOM, this is no mean feat).

AiW: How can our communities support you?

CH: It would be brilliant if people who aren’t in South Africa go to the African Books Collective website and check out our titles there  – http://www.africanbookscollective.com/publishers/modjaji-books This is a small way to put more money directly in the pockets of independent publishers in Africa, and not into the already bulging pockets of Amazon. For international readers our books are all available as print on demand and many are also available as e-books (South Africans can buy these – but not the POD ones.) Thank you for your interest and concern with how we are doing.

As part of the anniversary celebrations, Susanna Sacks spoke to Higgs about publishing innovative, experimental, and thoughtful works:

“[Modjaji] is also about supporting the books that don’t fit comfortably into a clear commercial genre. I find, interestingly, some of those books have the longest tails. They might not sell the most copies, but they find their readers and become perennials.”

Both of Modjaji’s celebratory anthologies – The Only Magic We Know: Selected Modjaji Poems 2004 to 2019 and Fool’s Gold: Selected Short Stories – were reviewed for us by Sacks.

“The collection brings together works by emerging and established artists which, through their diverse topics and forms, offer a vivid account of the press’s commitment to forward-thinking expression.”

Lastly, Sacks’ review of The Only Magic We Know celebrates the anthology as one that “builds on Modjaji’s work to accentuate poetry’s hybrid capacities”:

“Texts include familiar contemporary forms like the prose poem and the confessional, and novel, serial poems that play with dictionary forms, litany, and multimedia content. Despite these varied forms, the poems are drawn together in common themes, which emerge across four sections which trace themes of embodiment, life, and craft.”

To be listed in, or for more information about the African Small Publishers’ Catalogue, email info@modjajibooks.co.za.

You can also take out advertising as a way of supporting this project, email Modjaji for the rate card.

The deadline for receiving all new listings is the end of March 2021.