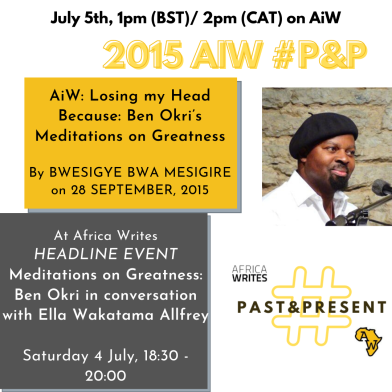 AiW note: Bwesigye Bwa Mesigire’s reflections on Ben Okri’s headline event for the 2015 Africa Writes Festival form part of our #PastAndPresent weekend of re-posts of coverage of the festival over the years (from 2013-2018). The full timetable of our re-posts going out over the first weekend in July, the weekend that the in-person festival is normally held, is here. It anticipates the digital conversations of the 2020 edition.

From the AFRICA WRITES 2015: PROGRAMME SUMMARY

Africa Writes showcases established and emerging literary talent from Africa and the Diaspora. The 2015 festival once again presented a unique opportunity for visitors to engage with their favourite African writers and books, and to discover new ones through our exciting programme.

Africa Writes 2015 highlights included ‘Meditations on Greatness: Ben Okri in Conversation’ in which the Booker prize-winning author discussed his vast selection of literary work. Hannah Pool led a conversation with other writers and personalities as they shared and discussed their favourite titles of African literature in ‘African Books to Inspire’.

Leading voice in African literature, Ben Okri, shares his reflections on the theme ‘Meditations on Greatness’, before being in conversation with editor and critic Ellah Wakatama Allfrey.

Acclaimed writer Ben Okri has published ten novels, including the Booker prize-winning The Famished Road, as well as collections of poetry, essays and short stories.  Born in Nigeria and currently living in London, Okri has been awarded numerous international prizes and has had his work translated into 26 languages. His most recent novel The Age of Magic was published by Head of Zeus in 2014.

Bwesigye’s re-post, below, also responds to another AiW review of Okri’s ‘Meditations on Greatness’, written for us by Réhab Abdelghany, an alternative position, entitled ‘A Question of Power’ (commissioned by and first published on AiW on the 24 August, 2015). You can find that review here.

Losing my Head Because: Ben Okri’s Meditations on Greatness

I thought that Ben Okri’s December 2014 infamous Guardian essay in which he berated African and black writers for suffering under a mental tyranny of subject was too prescriptive and an inaccurate reading of contemporary African fiction. Like Sofia Samatar, I felt that Okri’s essay was doing what it was complaining of: telling and being told what to write. A reverse of freedom, right? I did not see what he meant by greatness, that apparently African writers can’t achieve because they write about heavy subjects. This is what I told Facebook as I headed to the British Library to listen to the man’s keynote address at Africa Writes in July. 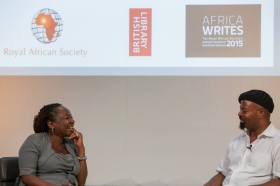 “Ben Okri will be in conversation with Ellah Wakatama Allfrey, now being introduced by Richard Dowden at ‪#‎AfricaWrites‬… knowing Ben’s fairly recent comments about the quality of African/Black writing, the theme of the conversation is Meditations on Greatness… do I know how I feel? It’s a sold out event. I love how Ellah does her conversations, panels, interviews and events. Looking forward.”

And for about an hour after Okri’s ‘Meditations on Greatness’ talk, my Facebook timeline was filled with quotes from the event. There were some interesting things to quote in what Mr. Okri told us was a mere preamble to the main speech.

“The world does not respect humanity, art or beauty, it respects Power. The West respects China, is beginning to respect India and secretly respects the Middle East.” – Ben Okri

I have been thinking a lot about soft power, art, diplomacy, ‘development’ and all that. This speaks to me.

In his not so short preamble to the main speech, Mr. Okri quoted James Baldwin, Malcolm X and other black intellectuals
whose gospel has never reduced in persuasiveness. From having emphasized form and style at the expense of subject and theme in his Guardian essay, this heavy reliance on obviously political theorists and the huge politics in the preamble was beginning to diminish my skepticism. Mr. Okri’s elucidation of the importance of mental freedom in achieving Power was beginning to soften my hardened attitude towards the man. I think that there is plenty of greatness in contemporary African and black writers, you see?

Onto the main speech itself.

“The more extreme will declare that madness is the ultimate of freedom. But it is the worst imprisonment.” – Ben Okri

Eh. I still think that the freer one is, the madder one is perceived to be, but maybe it is because I could not really understand the argument Mr. Okri was making. Big Grammar has never really made things easy for me to understand.

Nodding. Nail on the head.

My friend usually says that there is no reality, there is only perception. Can’t wait to chat with her about this. WhatsApp, where are you? The time is coming.

“Greatness is never perfect. Perfection is never great. Greatness is better than perfection because of its continued resonance.” – Ben Okri

The point about resonance is spot-on. But it can also be an excuse for not engaging in conversations about legitimate contradictions about the so-called ‘great’, this whole imperfection thing. It is true that no one is perfect, and yes, it is true actually, to be great one does not have to be perfect lest no human can be great. This paradoxical thinking too much, man!

“Storytelling in whatever form was the first form of genius. Stories make realities. With this tool, we made cities, villages, the law, order, etc.” – Ben Okri

Preach it, big brother. Why everyone needs to study Literature. Lawyers, doctors, engineers, everyone. Because stories, man.

Mr. Okri said much more. He stopped reading the speech way after the time that had been allocated had expired. He didn’t finish reading the whole script actually. Had to do a short conversation with Ellah after the speech, of course. The word greatness was buzzing in my mind. Could not count the number of times it was mentioned, and repeated.

Bibi Bakare-Yusuf of Cassava Republic , the Nigerian publisher, was quick to ask the man why he focused on rationality and logos, yet he was using the hands, the mouth, and his body as he spoke. Why the separation between mind and body? No. He said. That he was being read wrongly. The mind is part of the body.

A question about religion.

“Christianity is a very powerful religion but it is also a humility religion. Islam also has a dual effect on people. Religion is a double edged sword. Animistic African Religions are liberating. They connect us to the continuum that has nature involved, something beyond us.” – Ben Okri

Of course the language question. Duh! It is one of the compulsory questions at African literary events.

At 20:33 hours prompt, the conversation ended. The full house that was full of greatness at that moment began to clear, people taking books for signing etc. My head was feeling stiff and heavy on my neck, like a stone. It felt like someone was throwing pebbles at it. Mr. Okri’s so many greatnesses were hitting the stone hard. I needed to get home soonest. The bus. It was not too great having the stone for a head. Greatness is painful. 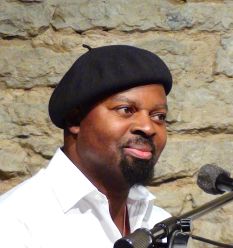 Facebooking and tweeting philosophical speeches is the beginning of madness. Of course we were told that madness is not great. But Mr. Okri’s speech really did me in. He said that greatness speaks to greatness. There is no other place for greatness to work but in us. But in us. I developed a headache. I have already said that greatness was mentioned so many times that evening must have seen the highest per minute rate of mentions of greatness ever. Mbu greatness needs us. That you will know the greatness of a person by how it creates futures. Not one future, but many futures. Headache though. Can we measure greatness also by the intensity of the headaches it creates?

I did not get what I was looking for. I did not get to hear Mr. Okri defend his views of contemporary African and black writing and what is stopping it from being great in his view. I did not get to hear him explain away Sofia Samatar’s rebuttal of his mental tyranny tirade. I still do not understand what greatness means according to Mr. Okri, to admit my slowness and lack of smartness. There were very many quotable things he said. I have just sampled a few. The whole speech was full of quotes. I think the quotes even work best removed from the entire speech. They spoke to me in their individuality. If they cohered into something concrete, I am afraid my head was busy coalescing into a stone to make that out.

I will be throwing around the quotes of the evening for a while. Like this one:

“If greatness makes us focus on a person, then it has blinded us from its true dimension.” – Ben Okri ‪

When asked by a journalist after the talk to describe it in one word, I said that it was ‘abstract’. A few months later, it still remains that. Not even Réhab Abdelghany’s reflections on the same have eased the ideas in the talk for my mind. The forceful shake Rehab talks about, apparently brought by the “Meditations on Greatness” turned my mind to stone. But I do not regret having spent time listening to Okri as Sa’eed Husaini seems to do in his Nation piece that brands the talk as ‘Meditations on Vagueness’. Oba he even moved out before the evening event ended officially. I have hope that one day, I will be able to understand Okri. And the Meditations too, when my mind learns how to avoid turning into stone. Or maybe sooner, if I could get the written version of the speech, and the speech in its entirety including the parts he did not read. 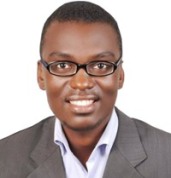 (2015) Bwesigye Bwa Mwesigire until recently was teaching Law and Human Rights at various Ugandan Universities. In the same period, he was Programs Director at Writivism, a pan African initiative of the Centre
for African Cultural Excellence, that promotes and connects African Literature to reality.

For our full timetable of our 2020 weekender of Africa Writes #Past&Present, (re)visit it at Back to Africa Writes – AiW’s #PastAndPresent – Saturday 4th and Sunday 5th July, 2020.

Yesterday, in our 2015 re-post, we published a wonderful Q&A between writer Abubakar Adam Ibrahim – The Whispering Trees (2012),  Season of Crimson Blossoms (2016) – and publisher and researcher Emma Shercliff, in which they talked about love, soyayya novels, age & desire, anticipating the panel Romance in the Digital Age:

“How does one define a romance novel? What is ‘African romance’? Our panel discusses the changing nature of romance publishing, examining how current modes of digital distribution are opening up new possibilities for authors and publishers across Africa. With publishers Bibi Bakare-Yusuf of Cassava Republic Press and Gersy Ifeanyi Ejimofo of Digitalback Books, and Africa39 writers, Abubakar Adam Ibrahim and Ndinda Kioko. Chaired by Emma Shercliff. (Africa Writes, 2015).” 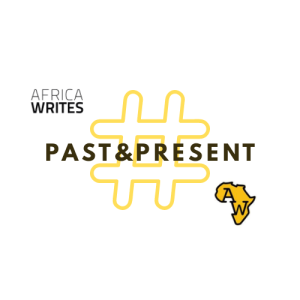