Home › Film › Film preview: ‘My Name is Adil’ – a lyrical autobiography of displacement and hope

Film preview: ‘My Name is Adil’ – a lyrical autobiography of displacement and hope

Sarah Jilani previews My Name is Adil, which is

showing this week in selected cinemas as part of the Royal African Society’s Film Africa festival 2016, running from Oct 28 – Nov 6 in London. Catch My Name is Adil tonight at Hackney Picturehouse at 6.30 pm. For tickets and more information about all of Film Africa’s films, visit Film Africa 2016.

“The sea and faraway countries are like an illness. Every Moroccan mother is afraid of both. The sea can be cruel. A foreign country can make you lonely and take away your faith in yourself. Only your country is like a mother; nobody can love you as she can.”

Thirteen-year-old Adil lives with his mother, uncle and grandfather in rural Morocco, bored of taking care of his uncle’s sheep and restless with village life. The absence of working age men in the village is conspicuous; Adil’s father is among those who have migrated to Italy in search of work and cash to send back home. When Adil’s father finally arranges for his son to join him in Italy, we are taken on a journey of displacement and hope through the eyes of our young protagonist. Narrated in voice-over by an adult Adil – also our director – My Name is Adil is a beautiful autobiographical film that also equally works as a visually stunning fiction feature or a lyrical documentary of sorts.

In this pensive and intimate retelling of his own story, Adil Azzab recounts how a young shepherd travelled – through both real and inner landscapes – to become a Moroccan filmmaker and lecturer in film who now lives in Milan, Italy. The result is a timeless tale of the experience of countless generations of migrants who have experienced heartache for a homeland, the hope of a new beginning, and the complexities of re-forging lives and identities. But the film is also deeply contemporary to its moment – humanising and individuating economic migrants, when they are all too often seen en masse, and through today’s overtly politicised rhetoric.

Upon arriving in Italy, Adil helps his father with his market stall, working long and thankless hours. They keep moving from one communal all-male living condition to another: an exhausting life that requires constant vigilance against pickpocket roommates, the police, and disillusionment with their situation. Directors Adil Azzab, Andrea Pellizzer, and Magda Rezene are also the film’s cinematographers, and this unity of vision and narrative is one of the most striking features of this film. From the hot, vast, empty expanses of rural Morocco to the rainy cobblestones of Italian streets, the trio’s eye for light and framing merge with a poetic script, evoking a full range of emotions and an immediate human connection for the viewer. Azzab has created a quiet gem of a film that captures the melancholy of an exilic existence where, despite the potential of eventual economic comfort, one is suspended in a battle of the mind over the heart – where the former knows no opportunity lies behind, but the latter yearns for the community and identity of the homeland. A timely and intimate work that will make you think, feel, smile and connect with its story – not to be missed. 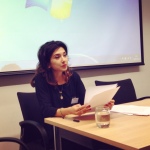 Sarah Jilani is a London-based freelance writer for publications including ArtReview, The Times Literary Supplement, and the Economist. A graduate of the Master of Studies in English (1900-Present) from the University of Oxford, her research interests are anti-colonial and resistance literature and film from African and South Asian independence periods. Her research has been published in Senses of Cinema (68, 2013), Life Writing (11:4, 2014), Postgraduate English (29, 2014), Literature/Film Quarterly (43:2, 2015) and the Oxonian Review (30:2, 2016).