Sudanese by way of Washington, DC, a Cave Canem fellow and poetry editor at Kinfolks Quarterly: a journal of black expression, Safia Elhillo received an MFA in poetry at the New School. Safia is a Pushcart Prize nominee, co-winner of the 2015 Brunel University African Poetry Prize, and winner of the 2016 Sillerman First Book Prize for African Poets. Safia’s first full-length collection, The January Children, is forthcoming from University of Nebraska Press in 2017. Here, in an interview conducted by the organizers of the Sillerman First Book Prize, she talks about her deep appreciation for Egyptian singer Abdelhalim Hafez and his importance to her work.

Describe the process of making the manuscript. How did you conceive of the poems together?

The manuscript was born out of a series of poems I started writing about Abdelhalim Hafez. At first, it was just one poem, but after it was done I still had so much more to say, so I kept writing more. For maybe six months, at the beginning of this process, I didn’t write a single poem that wasn’t about Abdelhalim Hafez.

When I started the project in earnest, I didn’t even know that I would end up having as many memories as I did about hearing Halim’s music throughout my childhood. So the poems then became a new entry point to thinking about my childhood, and my parents, and my grandparents— those early examples of love and failures of love juxtaposed with the romance in the music surrounding those memories. So that was the first direction the project was going in.

Then, I guess at that point I was spending a good part of most days writing about Abdelhalim, or listening to his songs or doing research on his life (I also, during this time, rewatched the biopic Halim several times a week)—he was showing up in my dreams and everything. And I think as the character of Halim solidified in my mind, I began to trust the character to be able to hold more abstract notions. I’m going to borrow what Karen McCarthy Woolf wrote in the foreword to my chapbook Asmarani, which contains a lot of the earlier Abdelhalim poems: “as the subject of [my] attentions he provides an opportunity to personify and deconstruct [my] relationship with the Arab[ic]-speaking world.” Writing poems to this dead man turned into writing poems about a lost country, a world gone extinct, in more concrete ways than I’d been able to hold these thoughts without Halim as the bridge. 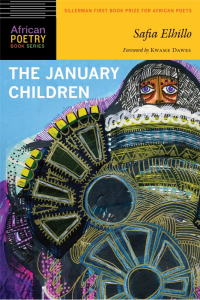 How long did the process of making the manuscript take, from beginning to put it together to the moment you submitted and won the Sillerman?

The manuscript was originally put together during my time in the MFA, to be submitted as part of my thesis. That version of the manuscript was a few pages short of the minimum for the Sillerman. I knew when I’d finished writing the Abdelhalim poems, during the process of putting together my thesis manuscript (“everything i know about abdlehalim hafez” is the last poem in the book, and was the last Halim poem I wrote), but a few of the other themes still felt a bit unresolved—not that I was actively thinking “these themes feel unresolved” but I found myself going back to them even though I thought I was finished writing poems for this manuscript. The newer poems in the manuscript were written during a month-long trip I took to Sudan this past January—prior to that trip, I hadn’t been to Sudan since beginning the manuscript, so the trip helped refresh and/or reinforce a lot of the images I was thinking about, and spending time with my grandparents helped clarify some stories I was misremembering (and correct some words I was mistranslating).

How did you hear you’d won the Sillerman prize? What did you do immediately after you’d heard?

It was during that same trip to Sudan! I got an email from Kwame saying he was trying to reach me, and could I please give him a call. I wrote back telling him I was in Sudan and that my phone was off, and asked if the message could be relayed via email. Then I realized I was going to die of curiosity if I didn’t call him back immediately, so I decided the roaming charges on my phone bill would be for some greater good, and called him back. Then I cried a little bit and went to a market with my mom and grandmother and cousins, and bought a silver bracelet.

What are you working on now?

I’m trying to reteach myself how to write poems that aren’t directly intended for a larger project—as in, still trying to break the habit of writing poems about Halim. I’m also experimenting a lot more with more traditional forms (which is to say, I’m trying to one day write a sestina that doesn’t suck). I just finished a small suite of poems that MIEL is releasing as a limited-run chapbook (only printing 100 copies), revisiting an old relationship but having it all take place over the course of one day marked by Muslim prayer times.

What are you reading/listening to?

I’m reading Solmaz Sharif’s Look, Maggie Nelson’s The Art of Cruelty, and rereading Assia Djebar’s Fantasia. I am still listening to Abdelhalim (especially Resala Men Taht Al Maa, which I listen to on repeat on long train/bus rides), but also listening to a lot of Stormzy (just bought tickets to see him in DC in October!), Noname’s Telefone, the new Nao album, and Kamau.

Egyptian singer Abdelhalim Hafez is a patron saint (/beloved boyfriend?) of your work—can you talk about his importance to you and your writing?

This answer never ends. He is so dreamy and such a heartthrob, and I love him because many of his songs are Nizar Qabbani poems set to music, because of the sad face he makes when he sings, the way his hands float around when he conducts, and because, in his prime, he was SUPER HANDSOME. But, also, many of Abdelhalim’s songs are addressed to “al-asmarani;” asmarani is a term of endearment in Arabic for a brown-skinned or dark-skinned person. Right from the start I was struck by how radical it was to specify a darker girl in a culture (and a world, really) marked by colorism and antiblackness. In a lot of my writing for this project, I was writing about, and as, Abdelhalim’s asmarani as a way of considering my own Arabized Africanness/Black Arabness when there are so few direct references to this particular hybrid identity in popular culture, in history. Also, his voice!!! I didn’t realize how hard those songs must have been to sing until I started watching Arab Idol (another habit acquired as a result of my time spent researching for this manuscript) and saw so many otherwise perfectly competent singers completely fail to do any of his songs any justice. (Except for my favorite contestant, from a few season ago, who had his Halim impression down to the hand movements and facial expressions. It was eerie and I loved it).

There’s a preoccupation in your work with language and with what speech can and cannot do, with re-naming and re-claiming words lost or buried under colonization, to get at truth, at origin. (I’m thinking of, especially, the line “You do not invite beauty into your home without asking it its birthplace” from the gorgeous “To The Girl in My Jazz Class” written by you & Aziza Barnes.) How do you think about this renaming in your work?

I am always preoccupied, first and foremost, by the politics of my choosing to write primarily in English, and the layers and layers of colonial implication there. And Arabic is not entirely blameless, either. I can aestheticize and I can concern myself with craft, but also cannot depoliticize, nor do I want to.

Also, I am obsessed with the new languages that form out of failures in translation. I hear a lot, in my family, what an old Arabic teacher of mine used to call “translationese,” a crooked sort of syntax where they first think a thought in Arabic before speaking it in English. “Turn on the light” and “turn off the light” becomes “open the light” and “close the light.” These moments of misspeaking are my favorite language, are my native language, and I want to make work that honors it.

The Sillerman First Book Prize for African Poetry is awarded annually to an African poet who has not yet published a collection of poetry. An “African writer” is taken to mean someone who was born in Africa, who is a national or resident of an African country, or whose parents are African. Deadline for submission for the 2017 Sillerman First Book Prize is December 1, 2016. For more information, please visit: africanpoetrybf.unl.edu or contact the Book Prize Coordinator at: psbookprize@unl.edu.