Blogging the Caine Prize: F.T. Kola’s ‘A Party for the Colonel’

Writing in 2000, only six years after the end of apartheid, Sarah Nuttall and Cheryl-Ann Michael in Senses of Culture decried that South African cultural and literary imaginings have been based mainly on the following frames: “the over-determination of the political, the inflation of resistance, and the fixation on race, or more particularly on racial supremacy and racial victimhood as a determinant of identity”. They called for new forms of imaginings in representing the South African cultural scene. However, the South African cultural and literary landscape, as viewed from the Caine Prize shortlists, continues to revisit the oppressive apartheid past – from Ken Barris’ 2003 shortlisted story ‘Clubfoot’ to Muthal Naidoo’s ‘Jail Birds’ (2005) and Gill Schierhout’s ‘The Day of the Surgical Colloquium Hosted by the Far East Rand Hospital’ (2008), among many others. This year’s shortlist is no different and F. T. Kola’s ‘A Party for the Colonel’ confronts the reader with the painful history of racial and economic oppression in the country. 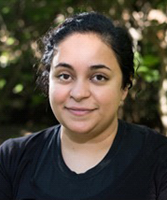 In a story that seems to be an excerpt from a longer work, Kola revives the ghosts of South Africa’s social and political past through the towering figure of Mr. Ibrahim, the Colonel. He is an insurance agent of Indian descent who tries to penetrate the racial boundaries by amassing wealth for himself as well as for his company. The story centres on the Colonel’s party held at a fancy Johannesburg hotel where admission is based on race and “although the Colonel could well have afforded it, they had never so much as stepped inside one of the fancy downtown hotels before.” As expected, they are initially denied entry by the guards until one of the party organisers intervenes. The party is organised to celebrate the Colonel for becoming “the first agent of the Gold Lion Insurance Company in South Africa to earn more than 25 million rand in insurance sales.”

From the view point of the Colonel’s wife, the reader is introduced to the wider political environment framing the story. The Colonel’s son, Mohammed, is actively involved in the freedom movement and this has widened the tension between the young man and his father. It is a few months after a major protest that resulted in the disappearance of Mohammed. He might be in prison or maybe dead. Mohammed’s three-year-old son, Riyaz, is sent to live with his grandparents and accompanies the Colonel and his wife to the party. The story further revisits other evils of the apartheid government including forceful relocations, unfair imprisonments and torture, poor education and economic exploitation.

Kola dwells a lot on the description of the party, the interaction between the other guests and the 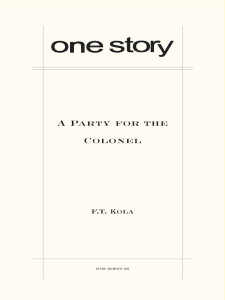 Colonel’s family, in a manner that presents the party as an arena for performing national and cultural unity, until the Colonel’s grandson stands on stage, lifts his little fist and shouts “Amandla!” The party creates an atmosphere where the guests pretend that apartheid does not exist and that the material success of the Colonel is proof of it. The conversation at the table in regard to the protests that led to the disappearance of Mohammed ignores the major issues of material, political and social inequalities, reducing the call for freedom to random “rampages”. As one of the guests says: “Our maid Onika’s daughter was there. I told her as soon as I saw the news, go home, find your daughter, don’t worry about the ironing, we were so shocked. They were just children, you know? To shoot at them like that! Lorraine was in London, she told me all about the BBC footage. But then what choice did they have? And we all said, where were the mothers? Would I let Henry go out that way, and act like that? Burning down your own school, not learning Afrikaans, how can you be trusted if you can’t act civilized? How can you get a job? That’s how you get respect. It’s absolutely essential. Look at you, Mr. Ibrahim, you are so successful.”

The irony of it all is totally lost on the guests and on the Colonel who, despite the reality facing his every day life, continues to believe that he can break the racial boundaries by acquiring wealth. He pretended that going only to the Indian cinema was a choice; he sent his son to a private school in Botswana and took his family on international trips to places where there was no racial inequality. However, the reality remained that “the Colonel’s money did not bring them favour, or let them into the forbidden places from which they would always be excluded: it merely let them pretend, sometimes, that Apartheid didn’t exist at all.”

The short story ends with the little boy’s fist held up in the air, on stage with his disapproving grandfather, while the rest of the guests look on in shock and maybe dismay. The little boy manages to break through the charade that has shrouded the entire party, and forces the guests, including the Colonel, to face the political reality of the day. This story is a powerful reminder of the oppressive history of South Africa, whose effects still echo today.

Doseline Kiguru is a student at the University of Stellenbosch, South Africa where she is currently working on a PhD in the Department of English Studies. (She can’t wait to finish her thesis!) Doseline has previously worked as a journalist, a researcher, and also published several short stories as well as story books. She also loves to read children’s story books because it makes her feel like a kid all over again and again! dosiekiguru@yahoo.com

For the last two years Africa in Words has been blogging the Caine Prize for African writing.  As Kate Haines wrote in Africa in Words’ first piece about the Caine Prize, we acknowledge that “it is a ‘good thing, but it isn’t the thing’, and yet conversation about whether it is or is claiming to be ‘the thing’ is important and will still continue. The prize has undoubtedly played a significant part in shaping the production and reception of post-millennial African writing in the UK and beyond, and this needs to be recognised and explored critically.” As such, Africa in Words will be sharing a review or comment piece each week on one of the five Caine Prize shortlisted short stories, by different contributors, some regular, some new. The shortlisted stories are:

The stories are all available to download and read for free via the above links and on the Caine Prize website. Read them, our reviews and others, and let us know what you think.