Posted in the run up to our review of the Caine Prize 2015 anthology Lusaka Punk and Other Stories, as part of a follow up series to our 2015 Blogging the Caine Prize – open to the ongoing public conversation the prize, and that this year’s winner’s ‘Act of Mutiny’ continues to inspire –  AiW chatted to some of the nominees before the winner was announced, about their stories, their experience of the prize, and their future plans. Here Nomonde Ntsepo chats to Masande Ntshanga about his shortlisted story, ‘Space.’

Nomonde Nstepo for AiW: Can you speak a little about your decision to tell this story from the perspective of a child narrator?
Masande Ntshanga: The setting was the initial inspiration behind the story, and in the end, the narrator emerged from a desire to write about the place in as faithful a manner as I could manage. I’ve always wanted to write a story about Bhisho in 1992. Even though I was too young to experience it, I’ve always been fascinated, or perhaps haunted, by the spectre of what would become known as the Bisho Massacre. Bhisho was the capital of the Ciskei at the time, a homeland under the apartheid government’s Bantustan system, and on the 7th of September, ANC supporters staged a protest to march for the reincorporation of the homeland into greater South Africa. This was in order to usher in full democratic process in the region, and as a result, the protestors were gunned down by the Ciskei Defence Force. It was an event that lingered in the community, and in some ways, I imagine that it still does. I spent some of my childhood years, there, and have always been struck by how, even though we were largely oblivious to the political situation at the time, we were no less animated by what we saw as its heroism and violence. In a strange way, it filtered into our play. We’d fill water bottles and call them petrol bombs. Then, on the other hand, there was also this very pristine suburban atmosphere that surrounded us. I started by wanting to write about that contrast, and once I realized that, I discovered I wanted to write about it in a way that was visceral and felt like an experience, as opposed to omniscient and authoritative. In other words, to favour the personal history over the national one. Childhood or adolescence seemed to be the right the vehicle, then, to bring out the feel of the environment I was after, both of them being periods I remembered as being guided more by instinct than knowledge.

I found your narrator particularly aware of the different spaces he occupies, and the ways in which the political and economic situation of the time defines these. Would you describe the political nature of the everyday as particularly important to your writing?
It’s particularly important, yes, but this isn’t a unique feature for a fiction writer in South Africa. It’s merely the reality of the society. Part of living in the most unequal country in the world means that our history doesn’t occur in stages, but rather is continuous and dynamic—historical moments such as apartheid don’t recede over time, but settle into the environment and remain ubiquitous—both structurally and socially. You don’t have to strain to discover it, and any involved observation brings at least some of it to the fore.

When reading ‘Space’, I was struck by the emphasis placed on the very tangible, material ways in which the boys move through their world. I was very aware of their bodies, of the heat, and of the spaces they moved through. How important was this to you and can you speak a little about the language you use to create these depictions? Once I’d settled on the decision to provide a visceral and experiential depiction of the environment, this was the only way in which I could proceed. The language had to provide the experience through the senses rather than memory, all of which was part of my desire to favour the personal narrative over the national one. Having said that, I also had to give the process over to instinct. The language may seem deliberate in retrospect, but at the time of writing I only had three guidelines in place: that is, to keep it vital, immersive and honest.

Masande Ntshanga (on the left) with the other shortlisted authors (from L. to R), F. T. Kola, Elnathan John, Namwali Serpell and Segun Afolabi, at the Bodleian Library prize-giving in Oxford.

The use of a childhood adventure or mystery narrative to depict the radical effects illness has on the way the boys perceive their world is profoundly effective. Can you speak about this decision? Are there any particular concerns or difficulties you experience when writing about sickness?
Thank you. I suppose this could be said to come from both experience and fiction. Even though the story isn’t autobiographical, some details from the narrator’s life could be seen to overlap with my own. It was common, for example, for us to wander around in packs at that age, and out of boredom, to create either imagined or real expeditions to undertake in our neighbourhoods. This could be anything from stealing peaches from a neighbour’s yard, sneaking over the fence of a large house to recover a lost tennis ball, or transforming a playground into a battlefield. Everything would take on this scale, even in the instances where the country’s political unrest would filter through to our corner of the world—for instance, I deleted a scene in which the boys throw stones at a ‘hippo’, or an armoured car, patrolling the neighbourhood. In fiction, I found that the childhood adventure is something that dates as far back as James Joyce, with “An Encounter”, to more contemporary stories like “The Body” by Stephen King, “Class Trip” by Victor LaValle, and “Virgins” by Danielle Evans. It’s a way of mapping a transition that can, simultaneously, exist as something spatial, experiential and psychological, and it’s employed by certain writers in literary fiction. Given my own experiences, I felt at home with it, it resonated with me, and my only addition was an emphasis on history.

To answer the second part of your question, I don’t feel any particular concerns or difficulties when it comes to writing about sickness, or at least none beyond it being an element that’s true to the story as a whole—that is, to the story’s aims and its logic. I grew up around sickness and it’s something that isn’t distant to me, which is a common reality for a large number of South Africans, and as such, something that opens itself up to a number of different perceptions, each no less real for being favourable or unfavourable, informed or uninformed, prosaic or horrific. In this story, for example, the depiction of illness takes on a heightened reality in tandem with the boys’ vivid, but limited understanding, as well as their fear of the unknown—the end of one scourge and the introduction of another—which would culminate in the country’s collective panic not much later, while on the other hand, my debut novel, The Reactive, set eleven years later, treats the same illness in the opposite way.

This story also won the Pen International/New Voices Award a few years ago. Based on that experience, and your recent experience of the Caine Prize, do you share some of the anxieties that characterise debate about literary prizes for African fiction?
I don’t. I identify as a South African writer, and for the International New Voices Award the story was nominated under PEN South Africa, which made the experience quite different in orientation from the Caine Prize, which works under the umbrella of African Writing. My fellow nominees, then, where from Canada and Mexico, all of us selected from a global pool, and each with stories that were rooted in our respective communities. In the time preceding that, my work had only gained exposure in South Africa, and as such, had only been read as South African fiction. Even though both terms are abstractions, for a writer pre-occupied with place at the moment, I find the South African label more fitting for my work—in the same way, to return to James Joyce, I prefer to think of him as an Irish author as opposed to a European one. I say this because most of the debates that I’ve encountered are hinged on unpacking the meaning of African Writing in the West’s cultural imagination. That said, I don’t share in on many of the anxieties because I don’t often share a context with this view of African Writing—having lived in South Africa all my life—and as such, am more likely to leave it to the West to take it as a prompt to reflect on whether or not it’s still an accurate and efficient system of categorization. I can only say that it’s probably a prompt worth having.

Masande Ntshanga is the winner of the 2013 pen International New Voices Award. He was born in East London (South Africa) in 1986 and graduated with a degree in Film and Media and an Honours degree in English Studies from the University of Cape Town, where he became a creative writing fellow, completing his Masters in Creative Writing under the Mellon Mays Foundation. He received a Fulbright Award and an NRF Freestanding Masters scholarship. His stories have appeared in Laugh It Off, itch, Imago and Habitat. He has also written for Rolling Stone magazine.

Ranka Primorac’s ‘Acts of Mutiny: the Caine Prize and ‘African Literature’’ , an in-depth article which forms part of Africa in Words’ 2015 series of comment pieces on the Caine Prize, is here – posted in the run up to our review of Lusaka Punk.

Lusaka Punk and Other Stories is now available from The New Internationalist. The Caine Prize 2015 anthology 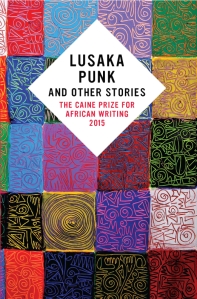 contains the 5 short-listed stories and those from the two week Caine Prize African Writers’ Workshop which took place in Elmina, Ghana this year, with Leila Aboulela and Zukiswa Wanner.

Last week Nomonde chatted to F.T. Kola; next week, our Q&A will be with the mutineer herself, Namwali Serpell.

Like Loading...
‹ A Question of Power: Ben Okri’s “Meditations on Greatness” at Africa Writes
Call for Papers and Fellowship opportunity: “Fela no go die o” at the African Literature Association Conference 2016 ›