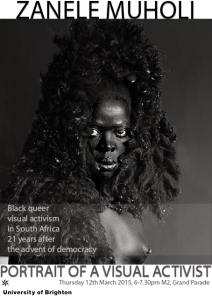 On 12th March 2015 the University of Brighton was visited by two extraordinary South Africans – Zanele Muholi and Lerato Dumse. They were talking about queer black visual activism in South Africa, 21 years after the advent of democracy.

Muholi was in the UK to do various talks, but also to try and meet with other black queer activists, and to learn. My connection with her is partly serendipitous: we share many friends, but I got in touch with her prior to this UK trip because I wanted to use one of her images to illustrate my research for a University poster competition (my PhD is exploring the nature and aesthetics of queer visual activism as a form of political communication in contemporary South Africa). As fate would have it, I missed the deadline for the poster competition but I started a correspondence with Muholi.

Muholi is a black lesbian photographer, and self-proclaimed ‘visual activist’, whose pioneering work situates her as a key figure in queer visual activism in South Africa. She is increasingly successful, and visible, on the global stage: if you’ve ever searched for images of black lesbians, or queer Africans, it is likely that you would have stumbled across one of her powerful portraits.

Muholi with ‘Faces and Phases’ at the University of Brighton. Photos – Tessa Lewin.

Muholi’s new book Faces and Phases, 2006-2014 (Steidl, 2014) comprises 250 portraits, accompanied by moving testimonies, which offer an insider’s perspective on the lives of the black lesbians and transmen (who were lesbians) she has met on her journeys as an activist. Gabeba Baderoon’s essay in Faces and Phases comments on Muholi’s sophisticated understanding of what images do both politically and epistemologically.  Muholi is not just making contemporary statements, she is creating a visual archive for future generations, and in her words ‘interfering with history’.

Muholi states: ‘My agitation is simple, just pick up a camera and capture’ but in reality her project is far from simple. In 2002, she co-founded the FEW (Forum for the Empowerment of Women) a black lesbian organization dedicated to providing a safe space for women to meet and organize. She began researching and documenting the stories of hate crimes against black lesbians, something that was not being done adequately by state structures. Violence against those who do not conform to gender norms remains high in South Africa despite a constitution that purports to offer the right to non-discrimination on the basis of sexual orientation. Much of Muholi’s work still deals with issues of violence because it is still an everyday reality for many of those she photographs.

I am a queer Southern African (born of exiled South African parents, so raised in London and Harare).  I think I first encountered Muholi’s work through NGO/Development circles – at the time she seemed to be the only photographer taking intimate images of black African lesbians that at the very least disputed the notion that homosexuality is ‘unAfrican’. When you look at her photographs you are reminded not just of the lack of photographs documenting the lives of black lesbians and trans* people, but also of the lack of photographs of ordinary, everyday African intimacy.

I saw a photograph on facebook recently (on a friend’s wall) of a black middle class Zimbabwean couple in a hospital room, just after the birth of their son. It was a technically unremarkable snapshot, but seeing it really shocked me because I realized how few of these types of photographs we see – particularly in the UK. Muholi is currently working on a series of photographs on weddings and funerals. The scope of her work is impressive ranging from her intimate self-portraits about periods, to camp group wedding shots. She is urgently, purposefully cataloguing queer black South African lives.

One of the things I found intriguing about the talk at Brighton University was Muholi’s capacity to talk about uncomfortable, confrontational issues in a way that held the audience. She began with a short documentary about her work made with Human Rights Watch – where she talks about her work as participatory research – her photographic subjects are her research participants, and by agreeing to be photographed they are contributing to her activism. She talked also about the importance of showing positive images as well as those documenting hate crimes.

Muholi talked about the fact that as a child she didn’t see any images of black people in ‘the posh magazines’ and that this really disturbed her, and it’s something she’s still trying to address in her work.

The image that advertised her talk was taken recently (27th February 2015, in Oslo) and is the first of a planned series of photographs that respond to, and challenge specific instances of racism. Someone in the audience asked her how she planned to approach this new work – whether friends would be asked to model for it, or? Muholi’s response was that she wanted to bear the pain of these incidents, and her responses to them, on her own, rather than inflict them on any other people – and so the work was likely to be a series of self-portraits.

In 2009 Muholi founded the collective Inkanyiso (Let your voices be heard), a forum for queer and visual activist media, through which she has mentored and conscientised a group of queer ‘born frees[i]’. At various points in time most of the members of Inkanyiso have lived together in Muholi’s flat, which served as a workspace and safe haven for the collective. Lerato Dumse is a writer, journalist and activist, and the last of a cohort of ten Inkanyiso mentees working alongside Muholi. Lerato talked about Inkanyiso, and the fact that some of the issues that they had living together where more to do with being human than their generational gap. Lerato spoke about the fact that some families in her community (KwaThema – a township on the outskirts of Joburg) are extremely supportive of their lesbian children and that this is something that it’s important not only to celebrate but also to demonstrate.

Muholi is proud of the fact that the other members of Inkanyiso are now out in the world doing their thing, independently, but still part of this network of activism. She is very consciously trying to build a new movement. When Muholi travels she tries to take with her at least one of the people who have been the subject of her portraits, partly to show other young black lesbians that this kind of success is possible. Here is Lerato’s blog of their time in London

What I found humbling and inspiring about both Muholi and Lerato was their openness and their unjaded, certain commitment to social change. I am conscious as I write this, that only now, 21 years after the advent of democracy, Rhodes has fallen at the University of Cape Town. It is clear there is still so much to be done, as Muholi says ‘it’s like a war’.

Tessa Lewin is a doctoral candidate at the University of Brighton, and a Research Fellow at the Institute of Development Studies. Her doctoral research explores the nature and aesthetics of queer visual activism as a form of political communication in contemporary South Africa. Tessa has worked as an illustrator, animator, and development practitioner. She was the communication manager for the feminist research consortium ‘Pathways of Women’s Empowerment’, and set up the documentary scheme Real World while in this role. Prior to this she managed the Digital Arts portfolio for Lighthouse in Brighton.

[i] People born after apartheid ended

Photos of the event, ‘What does queer visual activism look like in South Africa 21 years after the advent of democracy?’ at the University of Brighton, courtesy of Tessa Lewin.

Like Loading...
‹ Funmi Olawumi at Union Chapel, London (10/05/15)
Call For Papers: The Journal of History and Cultures ›