Marlene Dumas at the Tate Modern

Marlene Dumas: The Image as Burden

Marlene Dumas is one of the most prominent painters working today. Her intense, psychologically charged works explore themes of sexuality, love, death and shame, while borrowing from popular culture, art history and current affairs. 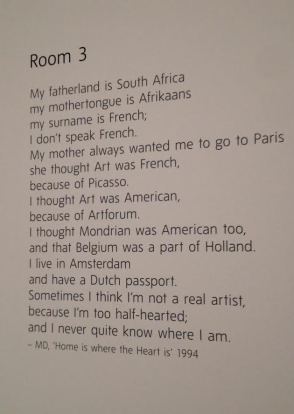 Born in 1953 in Cape Town, South Africa, Dumas moved to the Netherlands in 1976, where she came to prominence in the mid-1980s. This large-scale survey is the most significant exhibition of her work ever to be held in Europe, charting her career from early works, through seminal paintings to new works on paper.

The title of the exhibition is taken from The Image as Burden 1993, a small painting depicting one figure carrying another. As with many of Dumas’s works, her choice of title deeply affects our interpretation of the work. It hints at the sense of responsibility faced by the artist in choosing to create an image that can translate ideas about painting and the position of the artist. For Dumas it is important ‘to give more attention to what the painting does to the image, not only to what the image does to the painting.’

The exhibition pays poignant attention to Dumas’s widely discussed role as a feminist, an activist and a South African. Speaking to Jennifer Higgie in Tate magazine, Dumas explains that to describe her work, particularly the 1991-2 Black Drawings, as a criticism of apartheid would be “too simple a definition… I realised that (white) Americans and the Dutch, in particular, when they insist on saying it’s about apartheid, it’s as if they’re not open to their own feelings when they see a group of black faces and all the whites are excluded.”

In an age dominated by the digital image and mass media, Dumas cherishes the physicality of the human touch with work that is a testament to the meaning and potency of painting.

Marlene Dumas will be talking about her current retrospective exhibition at an evening lecture on Thursday 16 April, and the Tate will be screening her film Miss Interrupted on 22 March, 29 March, 5 April, and 3 May 2015.