Some South African Literary Events in focus this week

As South African writer Songeziwe Mahlangu, with his novel Penumbra (Kwela, 2013), is announced as the winner of the second Etisalat Prize for Literature – a Pan-African prize awarded for debut published work, whose shortlist this year included Nadia Davids’ An Imperfect Blessing (South Africa – Umuzi, 2014) and Chinelo Okparanta with Happiness, Like Water (Nigeria – Mariner Books, 2013) – a few literary events based in South Africa come into focus this week. Some are already running, some upcoming; each demonstrably aim to use their various and differing platforms to encourage and develop new creative and writing talent, as well as to support and lively-up new readers, reading cultures and publics (click on the titles of each for more details below – listed in order of appearance):

– Time of the Writer Festival, this year in partnership with Gcinamasiko Arts & Heritage Trust – University of KwaZulu-Natal, Durban, March 16-21.
– Short Story Day Africa launch both their new short story anthologies, Terra Incognita, edited by Nerine Dorman, and Follow the Road, a collection by Africa’s younger SSDA competitors and writers, edited by Maire Fisher and Tiah Beutement – at the Book Lounge, Cape Town, on Wednesday March 18.
– The University of Cape Town in partnership with the Man Booker International Prize 2015 are running a series of public events and seminars, as well as writing workshops and school visits – remaining events from Tuesday March 24, when the finalists for this year’s prize will be announced in Cape Town.
– Franschhoek Literary Festival 2015 – tickets are now on sale for events that last year largely sold out in advance. Includes a Book Week for Young Readers, the FLF Library Fund, a partnership with the inaugural Poetry for Life competition and the first in a series of annual lectures delivered at the Festival in memory of Andre Brink – Franschhoek, May 15-17.

Time of the Writer, UKZN, Durban

One of South Africa’s longest running literary festivals, this year’s Time of the Writer has already begun – with its opening session yesterday evening (March 16); the full programme of events starts proper today (Tues March 17) and runs until Saturday (March 21). Presented by the Centre for Creative Arts at the University of KwaZulu-Natal, Durban, Time of the Writer’s week-long programme brings together writers, publishers and editors for literary exchange and dialogue, with a focus on encouraging a culture of creative expression through reading and writing and providing a platform for emerging KwaZulu-Natal literary talent. 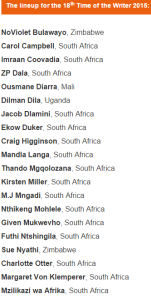 In addition to the evening events (programme here), the Festival also organizes a range of free daily activities across schools, community centres and tertiary campuses in Durban and the surrounding areas, including: school visits and workshops, reading sessions and panel discussions, a publishing forum, as well as the Educator’s Forum on the uses of literary fiction in the classroom, and the Community Writing Forum. Its annual short-story writing competition has already run (the winners receive cash prizes, book vouchers and complimentary tickets to the festival), and this, the 18th edition of the festival, includes a Storytelling Focus in partnership with Gcinamasiko Arts & Heritage Trust, an organization committed to the provision of writing and story-creation in schools and education institutions, especially for those who have poor access to resources, promoting a culture of reading and the heritage of story-telling.

The theme for this year’s festival, Writing For Our Lives, calls attention to the urgent continuing struggle of all writers in speaking truth and bearing witness to the times through their words. Globally writers are combatting censorship when the truth is too hard to swallow, challenging the reader’s perspective and sparking a passion for literature in our youth.

During this activity-rich week, audiences can expect to engage with a multitude of award-winning writers, from a wide range of political and social contexts, on the creative and technical processes and perspectives which shape their writing.

The ever excellent indy bookshop the Book Lounge will host Short Story Day Africa’s launch party of both of their new anthologies, Terra Incognita, stories from SSDA’s 2014 competition edited by Nerine Dorman, and Follow the Road – ‘a kaleidoscopic collection of stories’ from the competition for Africa’s younger writers – edited by Maire Fisher and Tiah Beautement. The event will feature appearances, readings and speeches from the team at SSDA, some of the adult and some of the younger writers.

Short Story Day Africa invites you to the launch party of two of their new anthologies: Terra Incognita edited by Nerine Dorman, and Follow the Road, edited by Maire Fisher and Tiah Beautement. The event will take place at The Book Lounge on Wednesday, 18 March, and will start at 5:30 for 6 PM.

The University of Cape Town in partnership with the Man Booker International Prize 2015, Cape Town

UCT will host the announcement of the finalists of the Man Booker International Prize 2015 next Tuesday, 24 March 2015. Awarded every two years to a living author who has published fiction either originally in English or whose work is generally available in translation in the English language, the Prize finalists announcement is accompanied this year by a series of public events and events in partnership with UCT’s English dept. including:
An evening with the judges as they discuss the finalists and read extracts from their novels at the always outstanding Book Lounge, cnr Buitenkant and Roeland Street (RSVP please) – Wednesday 25 March at 17.30;
A public seminar entitled ‘Arabian Nights and Indian Ocean World Literatures’, a conversation between judges Elleke Boehmer and Wen-Chin Ouyang, and chair of the judges Marina Warner – Wednesday, 25 March, 13.00- 14.30 in Room 116, Arts Block, Upper Campus UCT;
And a panel discussion on ‘World Literature from the Global South’ and the role of the Man Booker International in shaping the global literary field – at the Jameson Hall, UCT, Thursday 26 March, 18.00 (this is a ticketed event – book at www.uct.ac.uk/events).

There are two graduate workshops to be held at UCT that are open to limited numbers of graduate students from other programmes or universities who must have pre-booked –
To book for ‘The cultural industry and literary value’ with Elleke Boehmer and Edwin Frank (Tuesday, 24 March), contact sandra.young@uct.ac.za
For ‘Postcolonial Style’, an MA in Creative Writing workshop with Nadeem Aslam and Elleke Boehmer (Thursday, 26 March), contact imraan.coovadia@uct.ac.za.

The 2015 judging panel, as well as members of UCT’s English Dept. will also be visiting schools to engage in literary discussion and run writing and reading workshops with school learners:
LEAP 1 (Langa) and UCT SHAWCO Saturday School Programme

Tickets for the 2015 Franschhoek Literary Festival are on sale as of yesterday. The FLF has, as ever, packed a range of exciting events into its programme, which will run Friday 15 May to Sunday 17, preceded by a Book Week for Young Readers.

During Book Week, one of 50 children’s and YA authors and workshop facilitators visits every class in the Franschhoek Valley (around 4,500 learners), workshopping, reading and story-telling.

Each seat bought makes a contribution to the FLF Library Fund:

One of the main reasons for starting the FLF in 2007 was to encourage a culture of reading in the Franschhoek valley. This means that each seat you buy makes a contribution to the great cause of creating confident readers.
The FLF Library Fund:
has donated several thousand age- and language-appropriate new books to schools, creches, a container children’s library in Groendal and the village library
employed a qualified librarian in October 2012 who has upgraded and helps to run four primary school libraries
helps to cover the cost of part-time library assistants
is broadening its activities to motivate more school libraries in the broader Franschhoek valley
continues to donate new books to these and other school and local libraries

This year FLF will host the finals for the inaugural Poetry for Life competition, an international initiative that encourages students of high school age to memorise, recite and perform poetry. In the words of Poetry for Life’s site:

Memorising poetry involves internalising the architecture of a poem, the words and more importantly the connections between the words… It is a way of owning the world – a world that might be very different from your own. It is a way of travelling.

FLF 2015 also sees the establishment of an annual lecture in memory of André Brink. The inaugural lecture will be delivered by Associate Professor Harry Garuba (UCT Centre for African Studies and English Department), who will consider:

the ways in which the so-called ‘minor’ literatures get onto the world literary stage, and how they are read, appropriated, and canonised: in short, the ways they become world literature.

Shortlists for both the annual Alan Paton Award for non-fiction and the newly named Sunday Times Barry Ronge Fiction Prize are announced at the Festival.

Similar events in your area this (or any) week that we don’t know about? Get in touch and let us know. Or for any further info, stories or comments…

Our thumbnail image for this post is inside the Book Lounge, courtesy of morethanfood.co.za.

Like Loading...
‹ Call For Papers: RAL Special Issue on Ken Saro-Wiwa as Public Intellectual
Marlene Dumas at the Tate Modern ›