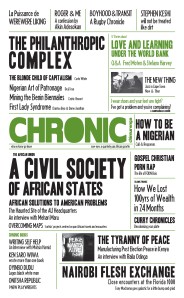 The latest issue (August 2013) of Chimurenga’s quarterly pan-African gazette, the Chronic, and its accompanying Chronic Books magazine are now available in print or for download. It features contributions from the likes of Akin Adesokan, Fred Moten, Rustum Kozain, Paula Akugizibwe, Stacy Hardy, Jon Soske, Tolu Ogunlesi, Binyavanga Wainaina, and Aryan Kaganof, among others. Topics covered in the issue range from the need for black writers to write about sex, recent developments among the new generation of South African jazz musicians, the inner workings of the African Union, and Kenya’s recent presidential election (the first since the post election violence of 2007), to Roger Federer’s forehand technique, the politics of and confusion caused by the two Benin Biénnales, and everything in between.

The stated mission of the Chronic is to give “voice to all aspects of life on the continent” and to celebrate “our capacity to continually produce something bold, beautiful and full of humour.” There is certainly something bold in Chimurenga’s gazette and the works included in this latest issue are truly eclectic (though there is a loose organizing logic). As with any undertaking of this magnitude, the quality and ability of the individual works contained within the Chronic’s pages to hold the reader’s attention can be understandably hit-or-miss.  For those pieces that struggle to keep the reader engaged, it is most often an issue of the sense of incompleteness or fragmentation conveyed by a work-in-progress. This is to be expected, with the publication acting as a series of experimental vignettes and elegant meditations, rather than comprehensive analysis.

Some of the highlights of this issue include Kangsen Feka Wakai’s “A Political Economy of Noise,” Stacy Hardy’s “Love and Learning Under the World Bank,” Tony Mochama’s “Close Encounters at the Florida 1000,” as well as the majority of the contents of the Chronic Books supplement. The brief article, “A Political Economy of Noise” recounts the unique path taken by Mozambique’s second president, Joaquim Alberto Chissano, out of Samora Machel’s hefty shadow and into the history books as one of post-independence Africa’s quirkiest statesmen.  In an exceptional manner, Wakai playfully sets the scene, placing Chissano’s story and career in the context of the actions of other fabled ‘Big Men’, global political and economic events, and various cultural phenomena of the day. We learn of the man’s fondness for transcendental meditation, his successful negotiation of a peace treaty with Renamo to end the Mozambican Civil War, and his bold choice to step down after two terms as president.

In “Love and Learning Under the World Bank,” Stacy Hardy manages to cobble together seventeen brief stories to create a contiguous historical narrative of the impact of structural adjustments and associated policies on African university systems and the resulting strategies, figures, and hierarchies that have emerged in the years since the early 1980s. Meanwhile, Tony Mochama’s “Close Encounters at the Florida 1000” takes up the author’s experience at a Nairobi nightclub popular with tourists and expats wherein perverse and otherworldly forms of sexual politics play themselves out on a nightly basis.

Ultimately, it is the Chronic Books that accompanies this issue of the Chronic that stands out most to me. The supplement, entitled “How To Be A Nigerian,” consists of a number of letters, interviews, book reviews, short essays and works of creative writing (most of which concern Nigerian literature and society). The conversations taking place within these pages are engaging, informative, and important. With a number of humorous updates of Peter Enahoro’s classic 1960s series, How To Be A Nigerian, the supplement is at once playful and deeply relevant. From the very beginning, Yemisi Ogbe provides readers with a biting and powerful critique of Chimamanda Adichie’s hitherto untouchable novel, Americanah – daring to discuss many of the problems and flaws that some of us (myself included) had with the novel, but rarely articulated.

My appreciation of such a review may simply stem from the fact that it acts as validation of my own opinion. However, the same cannot be said for Akin Adesokan’s letter from Lagos, “A Corpse and its Jurisdiction.” Adesokan’s Kafka-esque account of trying to report the presence of a human corpse on the median of a major Lagosian carriageway to the proper authorities is as much delightful and funny as it is tragic and telling. And the same can be said of many of the pieces contained within the August 2013 issue of the Chronic.

Steffan Horowitz is a regular contributor to the popular African media and culture blog, Africa is a Country. He received his MA in African Studies from Indiana University, where he focused on South African urbanism, youth, and cultural studies. He is currently based in New York City.

For more info. on the first edition of the Chronic: ‘The Chimurenga Chronic, now-now – first print issue of pan-African gazette’

Catch up on our most recent Words on the Times with the wonderful M Lynx Qualey from @arablitorg via the link in our bio!
The first of these two lovely quotes is from a rich Q&A on the blog with @ChibunduOnuzo with questions from @zahra_banday, who wrote a wonderful review of Sankofa last week. The second is from when we spoke to @littlebrownuk Press Officer & Comms Manager for fab lit mag @AFREADA Kimberley Nyamhondera (@kimberleynyam) to catch her #WordsOnTheTimes.
Happy Friday! This weekend we are reading Sulaiman Addonia's (@sulaimanaddonia) Silence is My Mother Tongue 📚 What are you reading?
An imaginative interplay of myth, race, mixed identity & radical politics, Sankofa (@viragopress) by @chibundu.onuzo is reviewed for us by Zahra Banday. Link is in our bio 📚
We have a lovely Q&A on the blog with filmmaker Ekwa Msangi (@ekwapics) from @uniofexeter students Libby Gervais, Abi Taphouse, James Truscott & Maddy Holmes. They talk culture, immigration, and racism in cinema, and ‘Farewell Amor'. Check it out via the link in our bio 🎬
Catch up with recent #CallsFor & opportunities - academic & creative - in our new roundup post! We hope this will be a useful tool for those on the lookout 👀 Link in bio as always 📰