Now available from Chimurenga [from the Shona word for “revolutionary struggle”]: the CHRONIC – a new pan-African quarterly print gazette, with supplementary books review magazine CHRONIC BOOKS – see below for a preview of Billy Kahora‘s article  on the Nairobi noir. 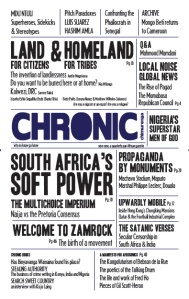 With a vocal front page that reflects the urgency of the project, its stories inside range from investigations into the business of moving corpses to the rhetoric of land theft and loss; from latent tensions between Africa’s most powerful nations to the soft power of the biggest satellite television provider; and from the unspoken history of Rushdie’s “word crimes” to the unwritten history of PAGAD. It also investigates crime writing in Nigeria, Kenya and India, takes score of the media’s muted response to the ‘artistry’ of the World’s No1 Test batsman, rocks to the new sound of Zambia’s Copper Belt and tells the story on one man’s mission to take down colonialisms monumental history.

… Borne out of an urgent need to write our world differently, to begin asking new questions, or even the old ones anew, the Chronic builds on the impact and reach of a pilot issue, published as Chimurenga 16 in 2011. Like this predecessor, it takes advantage of the newspaper as a popular medium that raises the perennial question of news and newness, to think and write critically about contingency and human agency today.

“Knowledge produced by Africans is always curtailed towards simplicity because we are trapped in the logic of emergency,” explains editor-in-chief Ntone Edjabe, “At Chimurenga we’re constantly trying to create beyond this shut hole of relevance. There is indeed famine and war but there is also life. There is also innovation, thinking, dreams – all the things that make life.”

Print copies of the Chronic are available from Chimurenga stockists as well as directly via their online shop (R95).

PREVIEW!
Billy Kahora in the 40 page stand-alone supplement to the Chimurenga Chronic, CHRONIC BOOKS: THE BUSINESS OF CRIME WRITING IN KENYA, INDIA AND NIGERIA.

In pursuit of some scriptwriter talent, Billy Kahora discovers that academic mantras, conservative world views and hand-me down observations stunt a rendering of the true grit that must be lived to be imagined in a Nairobi noir.

The cinema like the detective story, makes it possible to experience without danger all the excitement, passion and desirousness which must be repressed in a humanitarian ordering of life.
– C.G. Jung

What I can’t get over is that so good a first novel was written by the fuzz.
– Norman Mailer on lawyer George V Higgins’ crime novel The Friends Of Eddie Coyle

Way before I was asked to supervise a team of writers to script Nairobi Half Life, a film on the petty criminal ways of downtown Nairobi by German film director, Tom Tykver, I was tasked by a local publisher with finding the great unpublished Kenyan crime novels. This was the publisher’s second attempt, premised on an earlier failure, to build a crime novel series together with the best crime reporters in the country. Most of these reporters had not read much of the genre but they had a forensic knowledge of the Kenyan hustle, maintained a working knowledge of the latest cons and scams and knew the history of all the real-life ‘Wanted’ characters of contemporary Kenyan crime. They could also deliver a detailed account of police investigations and procedures, narrate from memory a full year’s roster of Nairobi’s numerous hijackings, drug busts, spare-parts car rings and credit card frauds, and had total recall of criminal executions by police frustrated with the justice system.

In what passed for editorial meetings, in downtown bars, over drinks, the reporters shared their war stories. These were older tales of the infamous CID boss, Mr Shaw, and his sidekick, Mr Patel, from the 1970s; the even more notorious Wakinyonga, Nairobi’s first star bank robber; and car spare-part magnates, Wanugu, Wacucu and Rasta – three of the most infamous newspaper cut-ups in 1990s Nairobi’s sitting rooms. The publisher and editor were curious why such vivid oral accounts never made the papers? Why were all newspaper crime reports by-lined by the men sitting with them invariably: ‘5 men were shot dead by police as they allegedly…’ – the standard four paragraphs and an added police sound-bite? Here, the reporters paused then all laughed knowingly and simultaneously.

To read the full article purchase the print edition of the Chronic from chimurengachronic.co.za/shop.

Like Loading...
‹ Achebe remembered: thanks for your wahala*
Global and Imperial History Network PG and Early Career Workshop, 30 May 2013. ›

We caught up with Open Hearts Big Dreams (@openheartsbigdreamsfund) for their Words on the Times. We talked to OHBD's founder Ellenore Angelidis about their main project, Ready Set Go Books, children's books, their Read 2 Me program, & more! Link in our bio 📚
We have a new Q&A with author of Africa’s first purely ‘digital novel’, the Kenyan writer and critic, Alexander Nderitu (@alexander_nderitu). He talks with AiW's Davina Kawuma about work, genre & the transfer to print of #WhenTheWhirlwindPasses: "a story can be poured into different vessels and it will become those vessels". Link in bio 📚
Read all about it! Catch up on the month’s African literary & cultural news in our April wrap 🗞️ Link in bio 📰
Up now, we have Q&A with Romeo Oriogun from @uniofexeter students Fisayo Amodu, Dora Houghton & Bryony Gooch. They explore Sacrament of Bodies, distillation, validation, publishing, protest, + more! Link in bio 🌟
Now on the blog, Kadiatou Keita (@Kadikei) asks "Can We Really Decolonize the American University?" in her review of Prof Ngũgĩ wa Thiong'o's lecture at @yale last month. It's a special one, check it out via the link in our bio!
Our #QuoteOfTheDay comes from Abubakar Adam Ibrahim speaking to @exeteruni students this week about writing, history, and Nigeria. Link to the interview is in our bio ✒️