Home › Reviews & Spotlights on... › Achebe remembered: thanks for your wahala*

Achebe remembered: thanks for your wahala* 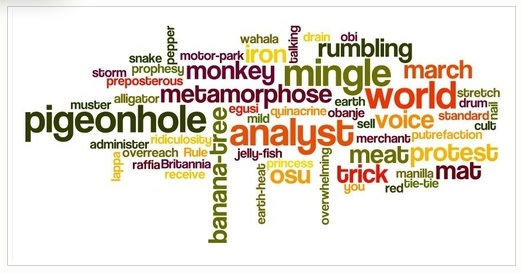 (from the OUP Blog)

The death of Achebe has seen a wide range of tributes: reprints of interviews, quotes, images but also reflections and memories from those who knew this great writer, and writers influenced by him. Many reflect on his sense of humour as well as his wisdom and literary skill, and I hope this post reflects that balance. His influence goes beyond individual novels to our use of language: the image above from Oxford University Press shows in graphical form his citations in the Oxford English Dictionary.

Achebe’s first book has entered into that elite club of writers taught in schools: writing in the Guardian, Ellah Wakatama Allfrey notes that Things Fall Apart is taught alongside Macbeth. Rather than the text being ghettoised or made to stand for ‘African literature’, in this ambitious classroom TFA is equal partner with Macbeth, and the plays speak to each other.

I admit that I feel ambivalent about TFA as class text: a former colleague told me he hated the novel after studying it at school. As a novel I have loved since it rescued me in the midst of drowning in a reading schedule on West Africa; I regret that students miss this chance to discover Achebe’s world themselves. Yet Martin Klein, writing as part of Margaret Jean Hay’s ‘African History in the Classroom’ wrote that Things Fall Apart goes beyond giving students with little or no idea of Africa a sense of context: for Klein it is ‘by far the most effective’ introduction to key themes in African history teaching.

For Ogaga Ifowodo this teaching goes far beyond the classroom, “a revolution, as every careful student of history knows, is never prompt or sudden. The cataclysmic moment when the dam bursts and sweeps away the old order is a culmination of a process long in the making and not a beginning that is also an end. Then there is the other sense of the term that accords perfectly with Achebe’s temperament: revolution as any undertaking whose goal is fundamental change in socio-economic conditions, attitudes, or mode of operation. This, precisely, is what Achebe meant by the novelist as teacher.”

Despite the impact of Things Fall Apart, it is shocking to think that Achebe falls into that elite group of authors who almost never made it due to a lost MS: worse than this, according to Ezenwa-Ohaeto, Achebe’s biographer: He quotes the novelist’s response to a friend who asked what his reaction would have been if the manuscript had been stolen: ‘he said that he would have died’.

For many writers Achebe was a teacher, editor and inspiration. Comments on the web reflect his broad ranging influence, to the extent that Ngugi wa Thiong’o jokes “There’s hardly any African writer of my generation who has not been mistaken for Achebe.”

@BBCBreaking Goodbye, Achebe. And thanks for everything. The world will miss you.

for Wole Soyinka and J.P. Clark ‘we have lost a brother’ , whilst Kenyan cartoonist GaMMZ pictured Achebe with a quote from TFA on the life cycle. 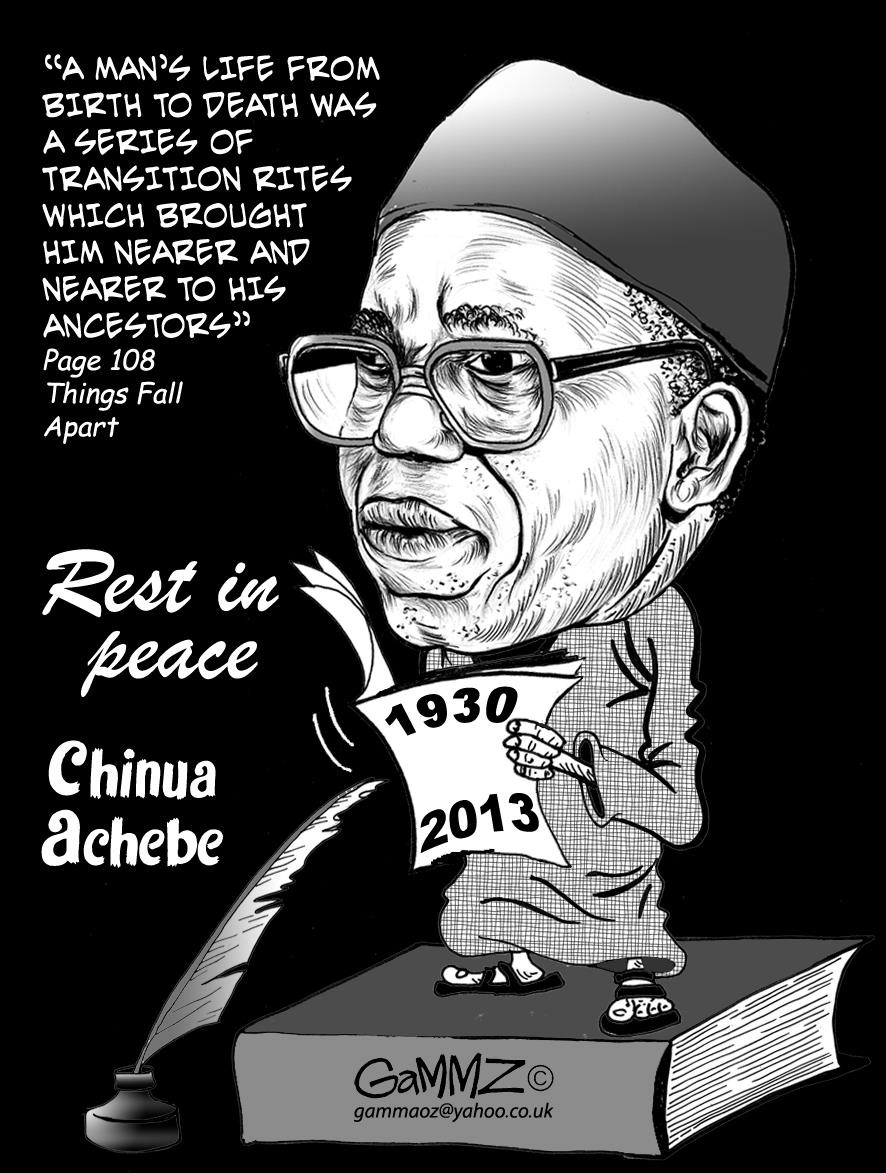 Achebe spent time speaking about his work, at universities, festivals and other events. Jesse Shipley reflects on the experience of years of friendship and work with Achebe at Bard College, New York, where Achebe was based for many years. It’s a rich post for ‘Africa’s a Country’, impossible to summarise, but I took this wee gem of a quote, Achebe reflecting on how he ‘edited’ an anecdote to make it uplifting for students:

“[Achebe] smiled and said, “the storyteller shapes his stories for a purpose.”

Richard Dowden’s blog at OUP, also shares his experience of working with the author, although in seeking to emphasise Achebe’s achievement I think he goes too far in claiming that only ‘the sons of chiefs’ accessed education in Nigeria before the 1930s.

Reviews of his final book had not been particularly kind. Reviewers noted his recycling of previous material, and that the book failed to live up to claims to deliver a ‘personal history’ of Biafra. For Adam Nossiter writing in the NY Times, Soyinka remains the more reliable source. For me Achebe’s elisions (as reported here: budgetary concerns mean I will wait to read the book in paperback!) are fascinating too.

Even for Chimamanda Adichie (in a review essay written before Achebe’s death), this memoir reflected limitations of his generation rather than the power of his earlier work:

“Sometimes, his stories are fable-like, with the simplicity  and simplifications  of that form. In Nigeria under colonial rule, he could travel from Lagos to the south-east at night without worrying about armed robbers. This, he argues, is because the British managed their colonies well. His simplification is rooted in disappointment. He is a member of Nigeria’s generation of the bewildered, the people who were fortunate to be educated, who were taught to believe in Nigeria, and who watched, helpless and confused, as the country crumbled”

“He leaned into his microphone, and very slowly and melodically, with rolling Rs and drawn out Os, roared: Read. Our. Books. The woman said, But I’m asking you. And Achebe said, I’m telling you: Read. Our. Books.”

So despite Achebe’s loss, that injunction to read African literature remains with us. Africaninwords will consider the new contenders for causing and stirring wahala through Nigerian fiction in a subsequent post.

Collection of photos and quotes from his books (the Guardian).

James Currey’s website, with details of Achebe’s biography by Ezenwa-Ohaeto.