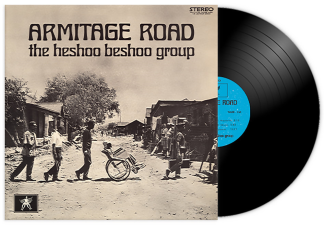 This rare apartheid-era collector’s item Armitage Road (originally released in 1970) is the only record by South African jazz ensemble The Heshoo Beshoo Group. In 2020, the album received a long overdue reissue by the Canadian record label We Are Busy Bodies.

On its initial release in the seventies, the record gained instant notoriety for two reasons. First, the players on the album were building a reputation for their exceptional abilities which left many people eager to hear them play. Second, the record was released in South Africa under the EMI imprint, Little Giants, with a later release by EMI France. In large part, record companies at the time were hesitant to promote any jazz artists; they favoured pop musicians. This was because apartheid government policies forced black people to listen to music with links to their ‘traditional roots’, therefore obscuring any sense of a cosmopolitan identity; the album consequently had a very limited distribution.

Many people, particularly the black metropolitan population of the day, and fans of jazz in the golden age of the 50s, had heard of Armitage Road but very few could access it. Since then, the record has been a highly prized collector’s item. The reissue gives all those who have longed to hear the music a chance to listen. Since the reissue, the album has been popular with its original fans as well as a new generation of jazz lovers who are aware of the Heshoo Beshoo Group. Guitarist Cyril Magubane is credited with the bulk of the composition, except for the single ‘Wait and See’, which was written by Henry Sithole. Brothers Henry and Stanley Sithole play tenor and alto sax on the album respectively, taking a lot from hard bop and paying homage to the likes of Coltrane and Kippie Moeketsi. This is fused with funk influences, which make the horn playing on this album quite distinctive.

In 1971, after the dissolution of Heshoo Beshoo, the brothers formed part of a new ensemble named ‘The Drive’, which became one of the few prominent South African jazz outfits in the late 70s. The Heshoo Beshoo Group is rounded out by Ernest Mothle on bass and Nelson Magwaza on the drums. The resulting sound combines those influences and drives in the horns with danceable South African jazz. 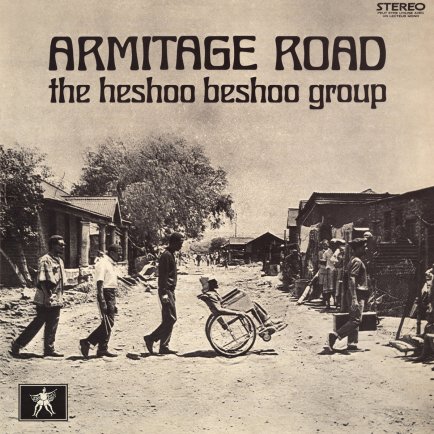 Much like The Beatles’ Abbey Road sleeve, which was released a year earlier, the original album cover shows the group crossing Armitage Road in Orlando, Soweto, Magubane’s address at the time. While one can only guess at the reasons for this, it is safe to assume that given the iconic popularity of The Beatles, the Heshoo Beshoo group was simply borrowing from American-European culture as many of their predecessors had done before, tying in with the desire for a more cosmopolitan identity, rather than that rooted in the ‘traditional’ and prescribed by the apartheid regime.

Having contracted polio as a child, Magubane appears in a wheelchair on the cover. Although small and fragile in stature, there’s nothing small or fragile about his musical abilities. When Armitage Road was recorded, Magubane was just twenty-four years old, an age when many a jazz musician might just be graduating from university or learning the ropes from their teachers. However, Magubane was able to compose four out of the five tracks on a groundbreaking album. At a relatively young age Magubane had already found his ‘voice’ and had the confidence to strive to sound just like himself.

Each of the tracks on the record are distinctive, all of them are memorable, and they provide the vehicles for improvisations that enable each of the players to showcase their skill and virtuosity.

The title track is an introduction to the album’s straight-ahead jazz influence. The melody is catchy and underpinned by a persistent drum and bass rhythm that plays in your memory long after the song has stopped. There is also a beautiful transition to swing that facilitates the majority of the solos. In this song in particular, the influence of hard bop on Stanley Sithole’s playing style is highlighted; it is this style that was further developed on the subsequent album Slow Drive to Soweto (1974) with later-formed group The Drive.

‘Wait and See’, the second track, is an enjoyable up-tempo funk tune. A good choice for the single of the album, this song beautifully illustrates the aesthetic of the record as a whole. ‘Emakhaya’, which follows, begins with a guitar solo in the style we would later come to know as South African neo-traditional guitar. The rest of the song is a groovy number distinguished by Magwaza’s driving pulse and a well thought out solo played by Stanley Sithole. Emakhaya is an isiZulu word that means ‘home’. More specifically, in the apartheid context emakhaya was used to describe the rural spaces designated for black people to reside in, otherwise known as bantustans. This particular song seems to suggest that this may be where Magubane feels most relaxed (and at home) and able to be himself. ‘Emakhaya’ becomes a vehicle that showcases Magubane’s well-honed playing as the whole song, solo and all, features outstanding guitar playing. Throughout, Magubane easily navigates different styles of guitar as the song blends several genres.

The original Armitage Road record Side 2

Although the word Amabutho means warriors,  ‘Amabutho’ is a peaceful song, not the sound one would typically associate with any kind of warfare or soldiers. All that can be said for these soldiers is that they seem to be having a very jolly time! Again, here, Magubane’s guitar is an early feature. Henry Sithole rounds off the performance with a gutsy solo. Personally, I feel that this may be the tune that showcases the players’ personalities, as well as shows off why they work so well together.

The last track on the record, ‘Lazy Bones’, is a jovial cyclical melody driven forward by Mothle’s consistency on the bass. Mothle himself is not prone to any fancy displays, which is exactly what this record needs. Instead, he is steadfast, playing his role in each of the recordings, showcasing his skill as a bassist but at no point trying to overshadow the other players. In fact, he and Magwaza should be commended for their work in establishing the fusion-based feel of this entire album. 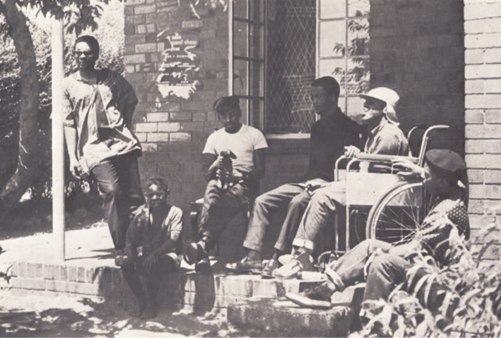 In the decade in which they were playing, the Heshoo Beshoo Group showed courage in persisting as a jazz ensemble at a time when any outward expressions of black cosmopolitanism were at best discouraged and at worst repressed by the state. It is unsurprising then that Armitage Road is the only record made by the Group. Not discounting potential circumstances within the ensemble itself that may have ultimately led its founding members to form The Drive, the limited distribution is testament to the hesitation by promoters and labels to invest in anything as unapologetically jazz as Armitage Road. The extraordinary abilities of the players, brought together brilliantly by Magubane’s writing, created a remarkable piece of work. This record would deservingly go on to influence the relatively few musicians who still chose to make jazz music in the 70s in South Africa. This reissue could not have come sooner and is well worth the listen.

Phumelele Mzimela is a Johannesburg-based vocalist, composer and educator. She is currently pursuing a Master of Music degree at the University of the Witwatersrand and has written various papers that have been presented at various conferences, including Arts Research Africa and the South African Society for Research in Music conference. As a composer, her most recent work comprises several scores, including for the films Umdlalo Wemplilo and Emshadweni Kuyabekezelwa. In addition to composing the score, she wrote and directed the film Hawe Ma!, which was broadcast on Mzansi Magic.

Phumelele’s musical prowess extends to the stage as well. She is the bandleader of Phumelele and the Light, an ensemble which has performed on notable stages such as The Orbit: Home of Jazz in Braamfontein. A passionate educator, she has taught music at various schools and has been a guest on various song writing panels hosted by DownTown Music Hub.

The album has been remastered from a pristine copy of the French release, with updated artwork that pays tribute to the original imagery and text.