Home › Reviews & Spotlights on... › A Sense of Africa in The Exploration of Reminiscences: A Review of  Limbe to Lagos: Nonfiction From Cameroon and Nigeria

A Sense of Africa in The Exploration of Reminiscences: A Review of  Limbe to Lagos: Nonfiction From Cameroon and Nigeria

When a collection of stories succeeds in making its readers identify with and care about real issues, triggering sensations of empathy and reinforcing readers’ own reminiscences, we realise the powerful impact of storytelling – especially when done in the true fashion of a very rich heritage of African oral narrative style, transposed into sublime non-fiction writing. Limbe to Lagos (2020), compiled by Dami Ajayi, Dzekashu MacViban, and Emmanuel Iduma, is an edited collection of non-fiction narratives that brings together ten writers pooled from Nigeria and Cameroon, as the title of the book symbolises. These ten writers (Adams Adeosun, Afope Ojo, Caleb Ajinomoh, Godwin Luba, Howard M-B Maximus, Lucia Edafioka, Nkiacha Atemnkeng, Raoul Djimeli, Sada Malumfashi and Socrates Mbamalu) express their observations and lived experiences through varying forms of individualised non-fiction writing. They touch on themes such as relationships, bereavement, travel, and memories, which I believe will resonate particularly with a West African readership, as well as Africans in general.

Limbe to Lagos is an assortment of awe-inspiring writing that appeals to all the five human senses in terms of imagery, and which also draws out a peculiar sixth sense: reminiscence. The editors themselves highlight this power of the anthology to evoke reminiscences of readers’ own experiences, as they note in their introduction of the collection that: “Here are stories that are true because and because they are windows that open into our contemporary African existence” (Limbe to Lagos: pp xi). 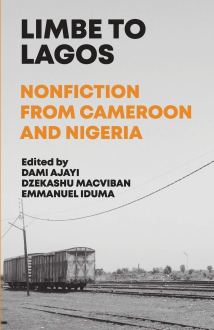 Setting the tone for this non-fiction reading adventure is Adams Adeosun, whose foray into a lamentation-driven recollection of his much-loved lady friend in “I Call Her My Beloved” would raise the eyebrows of many connoisseurs of the romantic arts. This is especially visible in the way in which he explores the fragmented tropes of longing and bereavement, where there are momentary switches in the way the narrative captures events that happen both in the past and in the present. Adeosun assumes a narrative voice that alternatively straddles the past and the present with the use of the second-person singular “you”, and the first-person plural “we”. The use of these pronoun forms stylistically makes it seem as if the author’s beloved is still alive, until we get to the penultimate section of the story only to realise that she’s been dead all this while.

There are also stories in the collection that trigger certain unique perspectives on the history of Nigeria and Cameroon. Lucia Edafioka’s “Daddy” spins in sync with issues relating to the collapse of the Delta Steel Company of Nigeria in the late 1990s, and the emotional and physical turmoil her family went through (as well as many families of employees of Delta Steel Company) as a result of the downturn in socio-economic fortunes which characterised the breakdown. Edafioka writes so beautifully that it is my wish to look out for any other non-fiction book she has published. There is also Nkiacha Atemnkeng, the author of “Impossible n’est Pas Camerounais,” who delves into the very eyes of history by writing a noteworthy chronological lesson on the rise and demise of CamAir (Cameroonian Airlines) and its rift with Air Afrique. The issues he raises in his diary-like entry in the collection reflect the reality of the predicament which most postcolonial West African countries underwent during their embryonic days. As a Ghanaian reader, it stimulates my memory of Ghana Airways and Black Star Shipping Lines, which both became moribund a few years after their inception due to massive corruption. Atemnkeng makes a captivating attempt at placing the rise and fall of CamAir side by side with the success and failure of the Cameroonian senior male football team. However, it is difficult to decipher how he put his account together, as he is personally absent from his narrative. It will be important to know if he used to work with CamAir or whether he is writing from his own observations.

In fact, the whole collection in Limbe to Lagos would not allow any avid reader to even let the compilation tarry for a whole week once they begin to read and enjoy the sense of reminiscences which it exudes. Apart from the essays or stories already mentioned, there are three other stories in the compilation which really got me laughing, smiling, nodding my head, and stimulating my musings about what it really takes to live in a society where individualism is a canker. The first story or essay in this category is Caleb Ajinomoh’s “I’d Rather Be Hard to Love Than Easy to Leave,” where although the narrator is criticized for admiring a woman unhinged from her mind, he does not neglect her for most parts of his life, until he is fully socialised into the realization that society frowns upon ‘madness’. The narrator’s relationship to Grace (the ‘mad’ woman) brings out a certain quandary about how to help and manage people with mental ailments within the African context. Ajinomoh is able to recollect and package ‘street side gossip’ in a most formidable memoir, combined with the excellent description of Grace’s neglected house, which is a symbol of the stark reality of social ostracization in relation to the issue of mental health in Africa in general.

The second story which had quite an effect on me was the travelogue, “A Trip to Koto,” authored by Godwin Luba. In this travelogue, readers are confronted with the issues of underdevelopment and social neglect which are all-too-common phenomena in most African countries. Luba gives a narrative bordering on ethnographical standards, and we are drawn into the description of his experiences and observations as they trigger reminiscences of similar villages and towns that are spread across the African terrain. His conversations with the village quack doctor are very significant from a traveller’s perspective. No reader will be surprised by Luba’s statement that “Political rhetoric and mellifluous promises were all that the villagers got from politicians during their election campaigns, all of which came to nothing” (Limbe to Lagos 30). This is the reality most rural spaces in Africa are left to deal with, and it is the consequent modes of coping with such realities that we read in the observations of Luba in Koto, where we see how the people survive and interact on a daily basis with respect to the availability of social infrastructure. All this is exemplified in the village dispenser and quack doctor, ‘Docteur’, who is a repository of the quotidian issues that percolate the rural ambience of Koto. This particular story is a must-read for anyone who purchases Limbe to Lagos.

In another travelogue, “Out of the Window in a Train,” Sada Malumfashi writes about his train journey from Kaduna to Lagos. I doubt there’s ever been such a masterful description of this popular journey route in Nigeria as Malumfashi has accomplished. He is able to thoroughly and realistically describe the ways in which people (both young and old) and their merchandise or luggage compete for space in the non-first-class cabins. Representation is also made about the divers idiosyncrasies of the different types of people who travel on that long journey from Kaduna to Lagos.

In conclusion, it is important to note that this collection of creative non-fiction adds up to a recent revitalisation in the genre in Africa and it is especially cast in the mould of earlier works of creative non-fiction that ingeniously express personal experiences as a communal reflective tool – such as Ethiopia Unbound (1911) and The Anglo Fante (1923 [1974]), authored by J. E. Casely-Hayford and Kobina Sekyi, respectively. With the emergence of recent compilations and collections such as Route 234 (2016), Safe House (2016), and Selves (2018), creative non-fiction in Africa is obviously blurring the lines between the different genres of writing such as memoir, the essay, travelogues, reportage, and even poetry. With the production of the magnificently-written Limbe to Lagos, creative non-fiction writing in Africa has surely set its trajectory to limitless achievements of dependable stories which will become a repository or backbone of future ideological forays into a uniquely African humanistic experience. If the type of area-based project that brought this collection to life can be replicated throughout the entire African continent, it will encourage many new writers into non-fiction. Limbe to Lagos: an excellent collection of the mind of Africa.

Kwame Osei-Poku lectures at the Department of English, University of Ghana, Legon. He is currently working on a manuscript about Colonial period African-authored travel writing as his postdoctoral research under the auspices of the African Humanities Program. He obtained all his degrees from the University of Ghana (fully home grown) and has traveled widely for Academic conferences and training programs. His research interests span from African-authored travel writing, Creative Non-fiction, Horror and terror in African literature, and Popular culture (poetics of Ghanaian masquerades).

Like Loading...
‹ Got my hair, got my head: A review of Living While Feminist: Our Bodies, Our Truths
Q&A: Words on the Times – Kwame Osei-Poku ›