Home › Caine Prize › Caine Prize 2020: Fiction masquerading as nonfiction: A Review of Chikodili Emelumadu’s “What to do When Your Child Brings Home a Mami Wata”

Caine Prize 2020: Fiction masquerading as nonfiction: A Review of Chikodili Emelumadu’s “What to do When Your Child Brings Home a Mami Wata”

AiW Note: AiW’s annual review series of what is now the AKO Caine Prize is back. We’ve been talking about prize culture for a long time at Africa in Words; Kate Wallis’s post on our joining the Caine Prize “blogathon” back in 2013 reflects on this in the context of the many other forms of “prizing” African literature. Through July, we are reviewing the stories shortlisted for the 2020 AKO Caine Prize for African Writing. Normally the winner is announced early in July with a series of events and celebrations; under this year’s exceptional circumstances, AKO Caine Prize is holding a virtual event to unveil the winner on 27 July! Enjoy working your way through these reviews and the shortlisted stories in the lead up to then.

Our third review, of Chikodili Emelumadu’s ‘What to do When Your Child Brings Home a Mami Wata’ is by our Communications Editor Joanna Woods.

We’ll cover all of the stories before the 27 July announcement and keep you updated on the winner.

Familiar to many, Mami Wata is a water sprite figure that features in much folklore of West Africa and in the African-American diaspora. Many variations of this figure and related stories exist. Often transcending gender, Mami Wata are ambiguous creatures, but a few traits appear to be consistent across traditions: the sprite’s ability to lure its admirers, and its intent to abduct them. Chikodili Emelumadu’s Caine Prize nominated short story, “What to do When Your Child Brings Home a Mami Wata” anticipates fatal attraction, providing parental guidelines on how to recognize and treat the water sprite in the event that a child should fall in love with one and if it should enter the home.

“What to do When Your Child Brings Home a Mami Wata” is fiction masquerading as non-fiction. With a polite tone, marked by ‘please’ and ‘thank you’, the story is structured in the form of a practical instruction paper, claiming accuracy and purporting to be representative of the truth. After a brief note on the definition of Mami Wata, the reader is thanked for purchasing the material before being taken through sections under the following headings: The Tests; Further Testing; To welcome or not to welcome?; Welcoming; Rejection; Forceful Ejection of a Malevolent Mami or Papi Wata From Your Home; and, Conclusion.

The Tests
The first step is to establish whether your child’s companion is benign or malevolent.

Along with reference to other texts about handling Mami Wata in the first paragraph, the story is accompanied by footnotes, intensifying the reader’s sense that what they are reading is non-fiction. Interestingly, some of the footnotes are legitimate citations, such as the reference to “Christabel” by Samuel T. Coleridge and “The Concubine” by Elechi Amadi, while others are fabricated, for example, Footnote 1: “McCain, C., ‘Mami Wata Migration Census’, December 2012.” Besides being somewhat disorienting, the combination of the real and the utterly fictional here functions persuasively, highlighting the need to take care when handling ‘truth.’ Shimmying between fiction and nonfiction, the author has rendered a pragmatically powerful story. Various rhetorical techniques help instill such an idea. In fact, ethos, pathos, logos and kairos can all be identified in Emelumadu’s story. The instructions on how to identify and handle a Mami Wata have a tight structure, and clear statements strengthen the implied author’s positionality, for example:

This paper is not meant to advocate any position, but merely to help guide you on whatever path you choose with regards to your child’s new Mami Wata paramour, companion or girlfriend.

Statistics and scientific-sounding language are also employed throughout, helping to reinforce authority:

As a point of note, five thousand respondents were polled when Mami Watas started to make themselves known in 2011. Out of this, 97% unequivocally condemned interspecies relationships, while 3% were undecided. That figure is now down to 72% with 5% still in the undecided camp, and 23% in the ‘Yes’ category.

And, while the guidelines maintain a confident tone, a certain amount of apprehension is also apparent; the caution implied with reference to Malevolent Mami Watas (MMW) provokes some anxiety for instance.

Readers will be aware that Chikodili Emelumadu has used myth in her short fiction before now (see our review of “Bush Baby”, shortlisted for the Caine Prize in 2017). And, to be sure, the figure of Mami Wata has been employed previously by various authors – as is referred to in one of the story’s footnotes; see Flora Nwapa’s novels, for example. However, Emelumadu appears to re-construct the myth of Mami Wata in order to voice certain concerns in the narrative. While Mami Wata is generally a symbol of resistance, Emelumadu’s characterization of the figure appears to go further to interrogate the idea that truth is a complex site of ideologies. In addition, by simultaneously drawing on age-old folklore and casting speculation about Mami Wata’s contemporary being in an everyday space – that is, the home – Emelumadu has done something fascinating with “What to do When Your Child Brings Home a Mami Wata.” By traversing time and being alert to the spaces between things, this story makes for compelling Caine Prize reading.

The author does a remarkable amount to push generic and formal expectations with this short story. Not only does the text draw on oral storytelling and play at simultaneously being fiction and non-fiction, but it also integrates fairytale aesthetic, for example, through instances such as “Mirror-Mirror: Mami Watas are very beautiful and cannot resist the evidence of their own attractiveness.” Just like its subject, Mami Wata, the story refuses to be pinned down and categorized. Instead, it is deliciously ambiguous.

Notwithstanding ambiguity, the characterization of Mami Wata in the short story is wonderfully evocative. Not only is the creature bestowed a particularly vivid presence through the description of its physical features: its scaly skin and its nacre-coated teeth, but it also takes shape through attributes such as vanity, its power to grant fortune, its tendency to overheat without large quantities of water, and its “aversion towards eating any of its kin from the sea.”

Emelumadu’s story is delightfully entertaining; scattered with wonderful touches of wit and an ironic sense of humour, “What to do When Your Child Brings Home a Mami Wata” is a real thrill to read.

Footnote 7: Fig 2. No Mami or Papi Wata was harmed in this photoshoot. 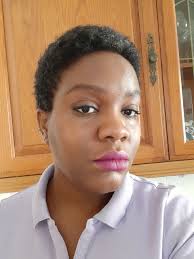 Chikodili Emelumadu was raised in Nigeria. Her short fiction has previously been shortlisted for several awards: “Candy Girl” for the Shirley Jackson Award (2015),  “Bush Baby” for the Caine Prize for African Literature (2017) – reviewed for Africa in Words as part of our annual Caine series here – and “Sin Eater” for a Nommo Award (2020). In 2019, she won the inaugural Curtis Brown First Novel prize for her novel Dazzling. You can follow Chikodili on Twitter: @chemelumadu

Like Loading...
‹ Review: Zimbabwe’s substitutions, or: what difference would a good or bad past make? Novuyo Rose Tshuma’s ‘House of Stone’ (2018).
Caine Prize 2020 & Africa Writes. Q&A: “[I]nvite our audiences to meditate on joy and re-center our humanity”: Ifeanyi Awachie’s Words on the Times ›