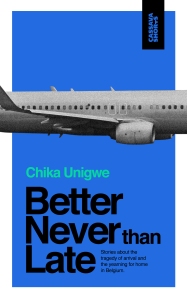 “This collection … is so wry and so generous, so astute about human deeds and misdeeds. Under Unigwe’s masterful hands, relationship – between Nigerians and Belgians, Naijas and Oyibo, priests and parish, bosses and workers, men and women, parents and children, friends and rivals – are struck, ignite, flicker to life like flames in a candelabra. The circle of light that Better Never Than Late casts is delicate and lucid, warm as a spot of sun or a hearth–which is to say, warm as a home.” – Namwali Serpell, author of The Old Drift

Chika Unigwe’s latest, Better Never Than Late, is published in the Cassava Shorts series – a series conceived by publisher Bibi Bakare Yusuf as celebrating short stories’ quick, powerful way of “gett[ing] immense in a world”: Unigwe’s book a is collection of stories that exemplify this possibility.

Here Unigwe, author of four novels – including the acclaimed On Black Sisters’ Street, about African prostitutes living and working in Belgium, (Jonathan Cape, 2009), short fiction and children’s books, and professor of Creative Writing at Brown University, joins us for some of her Words on the Times, a set of linked AiW Q&As offering a space for collective reflections on the way the COVID-19 pandemic is altering ways of working and our communities.

Unigwe’s Q&A anticipates our review of Better Never than Late, ‘Love, Loss and Migrant Womanhood’ by Zahra Banday, up on the blog tomorrow.

In her Words on the Times below, Unigwe shares with us her experiences of writing – as seeing, of listening, and productivity – during the pandemic, as well as tenderness and the possibilities of harnessing our “super power” in these times, a prospect for hope offered by acclaimed human rights lawyer Bryan Stevenson during his keynote at Emory’s 175th Commencement this year, which addressed the death of Ahmaud Arbery, a 25-year-old former high school athlete who was fatally shot on February 23 while jogging near his home on the outskirts of Brunswick, Georgia.

Africa in Words: Can you tell us a bit about your work and the ways that the COVID-19 pandemic has affected your plans?
Chika Unigwe: Writing is a solitary profession, and I am not one of those writers who need to sit in the midst of people at a Starbucks or so to work, so in that sense, very little has changed for me.

However, that doesn’t mean I am very productive now. Like many people I know, the pandemic has exerted a certain mental lethargy on me. I feel like I am seeing things through a fog, and sometimes, I cannot even make out the shape of whatever I see through that fog. I think of writing as a way of seeing. And at the moment, my sight isn’t clear at all, if that makes sense.

I am also being (or learning to be) kind to myself, show myself some tenderness. Either John Freeman or Julia Alvarez said recently that this is a moment of “Things Fall Apart, the centre cannot hold and out of it, something new will emerge.” I found it a really powerful articulation of what I am feeling. I am holding onto that hope of something new (and beautiful) emerging from the chaos of now.

AiW: In what ways are you working now that you weren’t before?
CU: I had trips planned which I couldn’t make, sadly. Better Never than Late is out in Dutch soon, in Belgium. Under the circumstances, I can’t travel to do events for it, and that makes me sad

Now, I am listening more, taking notes. I have almost filled an entire notebook. My work process now is more listening, notetaking than writing. We’ve been blessed with a lot of great content online. Amazing opportunity to catch talks I wouldn’t have otherwise.

AiW: What have you found most supportive and/or heart lifting in this time?
CU: I think that my response to this is linked to my response to the previous question. Listening to the words of writers and thinkers I have admired for so long, discovering new ones, getting some reading done, taking a break from writing which is often very consuming in its intensity. I have also been moved by the little acts of kindness I see and hear in the midst of the pandemic, neighborhoods organizing shopping for the elderly in their neighborhood, the acts of love that remind me that we are a community of human beings. Bryan Stevenson said in his Emory commencement speech that hope is our super power. These acts boost that super power.

What I’ve found most supportive is also my family, we are a close knit family (my husband and kids, but also my parents and my siblings). My siblings pass by and drop food they’ve made, they know I love but can’t make; my sons organize film nights: all these ways in which we share love are helping me not to be overwhelmed

AiW: How can our communities support you?
CU: Please buy our books, review our books, ask your libraries to stock them, beat their drums by talking about them loudly (if you’ve enjoyed them, especially).

“[In Better Never Than Late] Chika Unigwe writes radiant fiction about Nigerian characters and their encounters with Europe and its ideologies. This essential book shines a light on personal experiences of migration in ways that illuminate and surprise.” – Bernardine Evaristo, author of Girl, Woman, Other 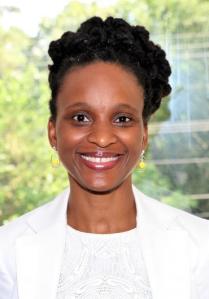 Chika Unigwe is the author of four novels: her debut novel, De Feniks (2005), is the first book of fiction written by a Flemish author of African origin and was shortlisted for the Vrouw en Kultuur debuutprijs for the best first novel by a female writer; Fata Morgana, published in Dutch in 2008, was released in English as On Black Sisters’ Street (Jonathan Cape, 2009) to high acclaim, winning the $100,000 Nigeria Prize for Literature in 2012; Night Dancer, published in 2012, was shortlisted for the 2016 NLNG Nigeria Prize for Literature; in 2014, Unigwe published Black Messiah, a novel about Olaudah Equiano.

In 2014, Unigwe was selected as one of the Africa39 list, 39 sub-Saharan African writers aged under 40 with potential and talent to define future trends in Africa. In 2016, she was appointed as the Bonderman Professor for Creative Writing at Brown University, and was judge of the Man Booker International Prize in 2017. Unigwe sits on the Board of Trustees of pan-African literary initiative Writivism, and set up the Awele Creative Trust in Nigeria to support young writers. 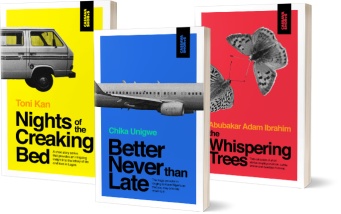 Find this “glorious collection” (AiW Guest Zahra Banday) at Cassava Press, where Better Never Than Late joins Toni Kan’s Nights of the Creaking Bed and, released today in e-book, The Whispering Trees, by Abubakar Ibrahim in the Cassava Shorts series.

CRP Publishing Director Bibi Bakare-Yusuf says, “With this new series, we want to celebrate the short story’s potential to reactivate a love of good old-fashioned story telling in pithy form. At a time when so much is competing for our attention, short stories are a quick way to get immense in a world and still feeling satiated. Some of my most explosive and evocative reads have been the short story form. So, I am very excited to introduce this series by some of the best-known and emerging writers from across the African world.”

Like Loading...
‹ CFP: Special Issue: English Studies in Africa, ‘A Century of Modernism in African Literature and Literary Culture’ (Deadline: 01 June 2021)
Love, Loss and Migrant Womanhood: A Review of “Better Never Than Late” by Chika Unigwe ›

Categories: Conversations with - interview, dialogue, Q&A, Words on the Times