AiW note: We caught up with novelist, poet, and professor of World Literature – our guest author and reviewer here, Rashi Rohatgi – to ask for some of her Words on the times – an AiW series of Q&As, connecting artists, writers, thinkers and educators in our new experiences of these days… You can find her responses below at the foot of her review.

In 2014, Basra Farah Hassan, a diplomat who worked with UNICEF to get nutrition to vulnerable mothers and children, was killed in a Taliban bombing in Kabul. Her brother, the 1998 Neustadt Prize-winning Somali novelist Nuruddin Farah, had recently handed into his publisher the draft of Hiding in Plain Sight (Riverhead Books; PB, Penguin 2015), which centres on such an attack and its effects on a victim’s family.

His next and latest novel, the 2018 North of Dawn (Riverhead, PB Dec 2019), also explores the ripple effects of terrorism, but this time focusing on a Somali-Norwegian terrorist’s family. With its über-stylized dialogue and overarching staginess, this is not a novel for everyone – but it is a masterful achievement. In the hands of a lesser author this would have been an anti-terror book set in an underrepresented Norwegian community, but in Farah’s, it is a book that is truly about that community, one that questions, without answering, what diaspora means in an age of terror.

Although the story is largely in third person, it opens with, and is fundamentally centered on Mugdi, a retired ambassador who settled in Norway before Somalia’s 1991 collapse. Having washed his hands of Somali politics in disgust as fellow negotiators “blamed one another along clan family lines” (15), he spends his days translating Giants in the Earth, rendering the diaspora novel of Norweigan pioneers to the Great Plains in the nineteenth-century, written by Norwegian-American O.E. Rølvaag in 1924,  into Somali. He also washes his hands of his son, Dhaqaneh, who followed a now familiar path from delinquency to religious extremism. His wife, Gacalo, however, keeps in touch with their son – and when Dhaqaneh blows himself up in a suicide attack, she brings his widow, Waliya, and his two teenage stepchildren, Saafi and her brother Naciim, to Oslo. In Waliya, Mugdi finds his ultimate nemesis: the ungrateful refugee. In Naciim, however, Mugdi finds an opportunity to try again to raise the son he always wanted: ambitious, assimilated, and esteemed.

Like the original Giants in the Earth, the plot of North of Dawn is a chronicle of settlement, tracing the incidents that mark those processes of accommodation, most of them quotidian and decidedly everyday. Apart from an affecting section about a Somali-Norwegian teen’s death in the 2011 Utøya Massacre, when far-right terrorist Anders Behring Breivik killed 77 people, and through which Farah commemorates the actually-slain Mona Abdinur, happenings accrue without major tensions. Mugdi marks each of the current events on his radar with a rumination on the occasion’s similarity to a scene from the older book, but without any particular flashes of insight – and nor do these ruminations give him any active sense of what is going to befall is his family next at any given point. In this sense, the book is boring to read in the way that an old pedant is boring to listen to. What we are first introduced to in the first-person Prologue as Mugdi’s voice – a stilted, stagey syntax – pervades every bit of the remaining third-person and infodrop-heavy dialogue, including that spoken by teenagers; this is not realism. And perhaps the overarching message of the pedantry – that both right-wing and Islamic terrorism “turn our worlds into hell” (222, as the text directly quotes Norwegian premier Jens Stoltenberg) – is straightforward and not worth the patience this type of chronicle requires. But this is not simply a book with an overarching message – it’s a sly and gradually accruing grappling with one of Farah’s longstanding preoccupations: what a feminist diasporic Somali man can be.

The way in which Mugdi wrestles with the patriarchy – never quite successfully but also never with ill intentions – becomes the real story. We find out early on in the narrative that he is a man “used to having his own way” (7), even though he is often praised by other Somali-Norwegian characters in the novel for treating his wife as an equal partner. He is not cold to his niece, Timiro, who Gacalo adopts as their then longed-for child when she is a baby, nor is he neglectful as her father; but through their multiple interactions in the novel we see that he’s never cultivated any deep hopes for her, secret or otherwise. She is ambitious, follows his footsteps, but still he thinks of himself as “a man born to grief” (13) because, in part, of Dhaqaneh’s betrayal. But then, he is not without perspective here, either; at one point we read that:

“On reflection, Mugdi would hand it to Gacalo that she had succeeded in her interventions with the boy early in his youth, when he worked and she was a housewife. When the roles reversed, she the breadwinner and it falling to him to be patient, tactful, and loving to the boy, he had failed.” (17)

Mugdi is a fully-drawn, complex character, whose assimilation is not just a quest for public approval – though it is not without this – but also a true openness to what other cultures have to offer, with the Norwegian self-mythology, if not Norwegian reality, advocating a gender equality that he admires and thus really works at taking on. When Mugdi first meets his grandson, Naciim, the boy has been taught by Dhaqaneh and Waliya that he is the family’s mahram, or male head, giving him explicit power to speak for his mother and sister, and implicit power (for this young boy) to think of their personhood as secondary; Mugdi immediately confronts Naciim about his behavior: “Where have you learned this machismo?” he asks (52). And for once, he does not wash his hands of the matter. As Naciim integrates into his new home – though Gacalo provides the practical help and Timiro the guidance to the teenage granddaughter Saafi – Mugdi steps up as Naciim’s mentor. For all its lack of realism, it is a realistic portrayal of the complexity of diasporic life, the always shifting, always negotiated sense of belonging to a subculture just different enough from an imagined homeland as to feel uncanny.

And, goodness, I have never loved a literary antagonist more than I do Waliya. She is a truly awful person throughout, but everything she does makes sense, and even though the narrative never lets us in to her head it’s clear that everything she feels makes sense, too – and certainly rang true to me, also a WOC immigrant to Norway (not, it should be specified, a Somali-Norwegian in Oslo). Although we first see Waliya at the airport fully covered, only speaking to Mugdi through her son, she is open about the fact that in her past she was the opposite of devout. This, her story, is one of promiscuity and sexuality as exit, her choices then not without shocking intergenerational consequences – and here the book touches on the importance of a Somali-Norwegian psychologist’s treatment of Waliya’s daughter, Saafi.

Once in Norway, though, Waliya herself refuses to get with the program.  When Timiro asks her why she came in the first place if she wants nothing to do with Norwegian society – even most of Somali-Norwegian society – Gacalo is quick to point out that Timiro sounds like the right-wing extremists who sporadically commit hate crimes throughout the book, but her ungratefulness irks Gacalo, too, who labels her newfound malaise ‘Waliyatitis’ (pg 245).

That Mugdi and Waliya never connect is not a tragedy for Waliya, but it is for Mugdi – even if, or perhaps because, he has pushed the significance of doing so out of his mind to make room for the newly ascendant son, Naciim.  And Waliya resists. She doesn’t want to be known, or loved, or to leave a legacy; she wants to live the safest, most rewarding life she can according to her own principles – exactly like Mugdi. Perhaps like us all.

A resonant, mightily intellectual response to tragedy both personal and societal, North of Dawn is a must-read for anyone interested in what diaspora means now.

Nuruddin Farah is a prizewinning Somali novelist – author of eleven previous novels, which have been translated into more than twenty languages and won numerous awards, including the Neustadt International Prize for Literature – currently living in Cape Town, though he has lived and taught around the world. He is also the author of Yesterday, Tomorrow: Voices from the Somali Diaspora (2000). North of Dawn – “a provocative, devastating story of love, loyalty, and national identity that asks whether it is ever possible to escape a legacy of violence” – is available from Riverhead/Penguin Random House, where you can listen to an audio sample, read by Sam Dastor. (Image: Simon Fraser University Public Affairs and Media Relations.)

Rashi Rohatgi is the author of the novel Where the Sun Will Rise Tomorrow and associate professor of World Literature at Nord University in northern Norway. www.rashenka.com | Twitter: @rashirohatgi.

Words on the times…from Rashi Rohatgi.
Inspired by Clémence Michallon’s set of interviews in the Independent with authors whose launches have been affected by the Coronavirus pandemic (31 March – here), and in the spirit of community and connection around our common interests in African letters, we share our experiences of the amplified times of now… 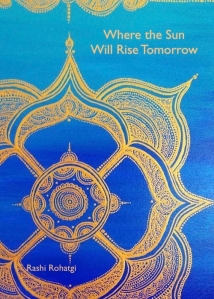 Available in paperback and e-book.

AiW: Tell us a bit about your own work and the ways that the COVID-19 pandemic has altered your plans.
Rashi Rohatgi: I am an academic (with a focus on world literature) as well as a novelist; I’ve had all sorts of plans derailed, but let’s be clear: the pandemic has put even more pressure on already unjust systems in a way that we should not see as inevitable. I am holding office hours via telephone, via conferencing, and so on – but contingent faculty without offices during non-pandemic times have been doing this regularly, and often without pay. My son gives me space and time to work from home because he recognises that the closure of his daycare is an extraordinary situation – but in my home country, the USA, affordable childcare is often simply not available. When we begin to put together a new ‘normal,’ I hope that part of my work, and all of ours, will involve making our new normal more inclusive.

In what ways are you working now that you weren’t before?
With a child on my lap! And with an omnipresent sense of foreboding.

What have you found most supportive and/or heart lifting in this time?
I recently read an article, ‘Maria Beaumont: Race and Caribbean Wealth at the Early Nineteenth-century Moravian Boarding School for Girls in Bethlehem’, by Catherine Bancroft in which I found out that my childhood school has been educating and hiring women of colour as early as the late 1700s! Their experiences weren’t utopian, and reading about them brought up mixed emotions. But it has made me recall, and feel connected to, my childhood school in a new way. (The article is published in the Journal of Moravian History, Vol. 13, No. 2 (Fall 2013), pp. 158-196, currently available via JSTOR.)

How can our communities support you?
In uncertain times, being an immigrant adds an additional layer of distress. Please check in on your friends who are far away from their families, who may be afraid to access essential services because of the rise in racist behaviour this pandemic has engendered, who may be stuck in abusive relationships with employers, or who may simply be afraid as you are afraid.