Zzz Zzzz. At the beginning and – as much shall be revealed – at the end, a swarm of mosquitoes speaks: “This is the story of a nation – not a kingdom or a people – so it begins, of course, with a white man.” The swarm functions as a choir throughout the novel. It comments upon the follies of the humans, mocks their weaknesses, their errors, their hubris. And while Namwali Serpell‘s The Old Drift is very much about these flawed people, she writes the mosquitos not only as spectators but also as agents of history. Within the first pages, this spellbinding debut novel announces itself as a force to be reckoned with. 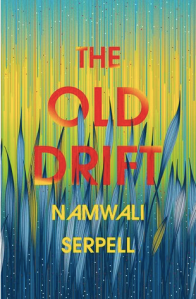 The Old Drift is a multi-generational novel traversing many decades, multiple families, various locations. It also defies genre boundaries. The novel starts off in the early 20th century with a chapter set in a location called “The Old Drift,” a settlement on the Zambezi River. In the first chapter the forefathers of the three families which provide the backbone of the novel, Percy M. Clark, Pietro Gavuzzi, and N’gulubu, clash, setting the first ripples of the unfurling stories in motion. This chapter is told in the first person by Clark, who is based on an actual historical figure. Serpell leans heavily on his diaries to paint a picture of the racist, arbitrary (nation-state) beginnings of what later becomes Zambia. This first chapter also introduces the thematic concerns of the novel: chance encounters, unequal power structures, and the struggle for agency. The rest of the novel is comprised of three main sections entitled “The Grandmothers,” “The Mothers,” and “The Children.” Each section follows one protagonist from each family tree. From colonialism to independence, from a health crisis to a possible state breakdown, The Old Drift covers a vast array of topics while never losing sight of its plenty protagonists.

This novel could equally be described as an historical novel or as a work of sci-fi. It covers a vast historical period, follows its characters in post-war Italy, witnesses the building of a dam in Zambia, and peeks into political debates on a Lusaka campus. Serpell tells the story of the creation of a nation and the people who find themselves within these artificial borders for one reason or another. She shows how these people struggle to shape the place, or come to shape it sometimes with unintended consequences. Serpell does not only paint a detailed historical backdrop – alluding to all kinds of historical events – but interrogates this history and the historiography of Zambia. The sci-fi elements of the novel catch you by surprise, the narrative extending into the unknown future of science. Serpell employs science fiction in the truest sense: a fiction of science. She probes and asks: what might happen if we go down a certain lane just a few steps more?  But no matter if it is some scientific intervention or a historical episode, this novel made me stop several times to first ask myself (and then ask google) if a specific thing was pure fiction or tethered to some true event or research. Often times, reality proved to be the stranger fiction. This is one of the beautiful insights of the novel. 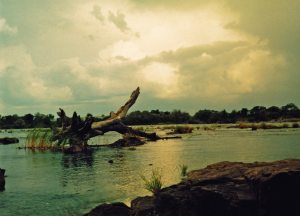 The negotiation of past and future may find its most exciting expression when the novel dives into the history of the “Afronauts.” The story of Edward Mukuka Nkoloso and the Zambia National Academy of Science, Space Research and Philosophy is in equal parts astounding, humorous, revolutionary, and mysterious. A science fiction, in quite a different sense, this episode gives a sense of futurity to the past. The section about the Afronauts also gives us one of the most fascinating characters: Matha, one of “the grandmothers” and one of the chosen cadets. She is an intelligent girl with big dreams that are regularly derailed by patriarchy. When she is later left by the father of her child, she begins to cry and does not cease for decades. As sprawling as the novel itself, as uncontainable, are Matha’s tears.

The women in The Old Drift often inhabit unruly bodies and exhibit ambitions which their surroundings and circumstances attempt to curb. To watch them struggle against these limitations, to witness their success and see them err, is just one of the many joys (and sorrows) this novel brings. Serpell manages to focus equally on small details and to elaborate on wider contexts. In the end, all these stories converge in an unforgettable climax. Finishing the novel left me breathless and with the distinct feeling of having read five novels: The Old Drift is full to the brim with wonders.

Charlott Schönwetter is writing her PhD in Gender Studies at Humboldt University, Berlin on child soldier narratives in Western African literature(s) and categories such as gender, age, and race. She regularly discusses literature on Instagram @half_book_and_co and her blog as well as her podcast: haveyouread.de.