From the Collection of Karun Thakar & the late Mark Shivas
At SOAS, Brunei Gallery, London
Showing until 23 March 2019

The late 1980s in Ghana saw the emergence of exuberant new visual modes of expression in a new local and innovative film industry (alongside that of Nigeria commonly referred to as Nollywood), especially in the ways films were promoted by vivid hand painted posters on sack or canvass.

Highly skilled artists emerged to create striking images with their surfaces co-ordinated in eye catching colour arrangements to command the attention of passers-by. These film posters were commissioned by mobile local entrepreneurs taking the films to a range of communities and using the cloth posters that could be rolled up, unfurled and transported very easily as they criss-crossed the country. The intense competition between films enhanced the creativity and imaginative possibilities realised by the artists in the film posters and established their individual renown. 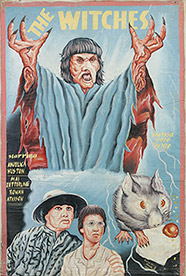 These dramatic and highly charged images, usually some six or seven feet high, were conspicuously displayed by the roadside or in prominent public positions to alert filmgoers to the release of new films. Many of these films were made locally in Ghana or imported from the Nollywood film industry of Nigeria. Their iconography emphasised the melodramatic, combining a blend of elements that drew on the local beliefs that intersected with the range of popular imported films, such as the imagery of America’s Hollywood and India’s Bollywood that were also shown in Ghana.

This exhibition of over 100 of these extraordinary film posters, from the Collection of Karun Thakar & the late Mark Shivas [TV & Film producer], celebrates the talent of the varied artists who used to produce these posters, that with advances in digital printing are no longer in demand.

Please note the exhibition African Gaze: Hollywood; Bollywood and Nollywood film posters from Ghana contains imagery of nudity, violence and the ‘occult’ that some visitors may find disturbing or offensive.