Literary Networks and Collaborations: A Nod towards Knowledge Decolonisation

AiW note: This is part of a series of posts for Africa in Words exploring the networked series of research, events, and discussions, ‘Small Magazines, Literary Networks and Self-Fashioning in Africa and its Diasporas’. Here our Guest, Doseline Kiguru, discusses meetings at the University of Cape Town in April 2017 and the University of Bristol in 2018, which included Moradewun Adejunmobi, Chimurenga‘s Stacy Hardy and Kwani?‘s Billy Kahora amongst many others.

Details of other AiW posts in the series follow this one below.

Discussions of contemporary African literature today are increasingly taking place outside of academic institutions, and the literature produced has also gone beyond the physical text. As a researcher whose main focus has been on the African publishing industry and the place of the literary prize, I have found it increasingly important to focus on the many networks and literary platforms that continue to play different roles in the production (and even post-production) of a literary text. In this regard, the literary magazine has emerged as a key player in this industry. However, it has also proved that the growth of literature at any given moment in history comes as a result of deliberate networks and collaborations that are made among different cultural producers.

With a history of a weak mainstream publishing sector in many African contexts, journals and small magazines have performed the role of canon formation, validating writers through publications and awards. Importantly, however, they have also maintained a link with other cultural producers such as literary festivals, award institutions, mainstream publishers through co-publishing agreements, and academics through literature and creative writing classes, proving that literary growth involves a complex relationship between the literary organisation, the academy and the awarding bodies, among other cultural production institutions.

From the ‘Small Magazines, Literary Networks and Self-Fashioning in Africa and its Diasporas’ homepage.

I have always been very fascinated with short fiction and especially how it fits within literary magazines and periodicals. In my research on African literature and prizes, I found it so fulfilling to go back to the archives and devour magazine after magazine, story after poem after essay, spanning decades and covering a wide variety of topics through different historical periods. Apart from the significant role of literary competitions and awards in the history of African literature, one of the major things that stood out in my research was the importance of literary networks and collaborations. So when I joined a team of other researchers interested in the place of small magazines and literary networks, it was like arriving home after a long trek.

The AHRC (UK)-funded Research Network under the title ‘Small Magazines, Literary Networks and Self-Fashioning’ has focused, from the first meeting at the University of Cape Town in April 2017, on literary networks and collaborations. This meeting, which was the first in a series, brought together participants from the academic and the creative writing world to form a network of researchers interested in this topic. More than this, the research network serves as a platform for knowledge collaboration by engaging a diversity of thinkers. Its focus on small magazines and literary networks was not only an acknowledgement of the relevance of the history of literary publishing in Africa, especially through litmags, but also the fact that the production and consumption of a literary product involves the creation and sustenance of a network of collaborations over many generations and through different historical and political eras.

The structure of that first meeting, strategically located at the African Studies Library at the University of Cape Town, ensured that the collaboration process started with the network’s participants each contributing to the discussion by highlighting their research and creative writing outputs. In the spirit of acknowledging the fact that literary conversations are increasingly happening outside of mainstream institutions, this workshop also involved the network researchers meeting at the then offices of Chimurenga magazine on Long Street, Cape Town, with discussions elaborating the collaboration not only between academia and literary magazines but also between different literary outfits. This involved discussions with Chimurenga’s Stacy Hardy and Bongani Kona, and Kwani?’s Billy Kahora as well as a conversation with University of Cape Town’s Kwezi Mkhize, Kelwyn Sole of Donga, and South African writer and cultural icon Zebulon Dread who is best known for his self-published magazine Hei Voetsek! The physical location of these meetings, some of which were open to the public, also allowed the network participants an opportunity to interact with other literary and cultural producers as well as to access the literary magazines archive. The archive became not only the starting point of a discussion on these platforms and their significance to contemporary literary production in Africa but also formed my research focus at the next meeting in this series—a conference held at the University of Bristol in January 2018.

This conference was a continuation of the first meeting and brought together more academics, researchers 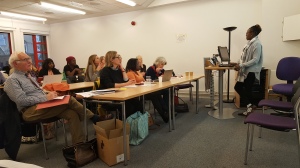 and writers working in related fields. While my focus here looked more into the question of language and literary outputs from the African continent, specifically the question of canonization and the circulation of literary value through different languages, what stood out in the conference was the level of conversation and continuation of ideas between different papers presented. From the opening keynote delivered by Moradewun Adejunmobi to the closing keynote, a conversation between Stacy Hardy and Billy Kahora, the emphasis was on the networks that have become so significant in contemporary African literature today, ensuring its place on international literary platforms.

Looking at the history of literary magazines in and on Africa, Paris and other European metropolises feature as significant geographical locations that facilitated the growth of African literature. For instance, the Paris-based cultural journal, Présence Africaine, one of the first in African literary publishing, played a major role in the establishment of African cultural and literary magazines in the pre- and post-independence eras. The impact of this magazine must, however, be understood within the wider framework of Paris as an important cultural melting pot for the broader black diaspora especially after the First World War. Indeed, writing in The Practice of Diaspora: Literature, Translation, and the Rise of Black Internationalism (2003), Brent Hayes Edwards argues that the European metropole ‘provided a special sort of vibrant, cosmopolitan space for interaction that was available neither in the United States nor in the colonies’ for it ‘allowed boundary crossing, conversations, and collaborations’ (4). Following on this historical representation of African publishing and literature, what the ‘Small Magazines, Literary Networks and Self Fashioning’ research network is therefore engaging with is a reversal of this narrative by providing data, and critical analysis, on a continued history of literary networking and collaboration that has gone beyond physical and geographical boundaries, genres, languages, institutions and ideas within the larger African continent. It is a nod towards the broader issue of knowledge decolonization.

Doseline Kiguru is a researcher, teacher, creative writer and hustler. Her research engages with issues of cultural and literary production in Africa with a major focus on the publishing and prize industries, and the effects that they have on local literary production. In her research on the contemporary literary scene on the continent, she engages with questions of language use in literature, significance of writers’ organisations, literary magazines, creative writing, history of publishing and promotion of literature on the continent, among others. She is currently the Humanities Research Fellow at the British Institute in Eastern Africa. Doseline has previously worked as a researcher, assistant lecturer/teaching fellow, writer, editor, and journalist in different organisations both in Kenya and South Africa.

Doseline’s is the sixth post published by Africa in Words in a series that come out of conversations between a new interdisciplinary network of researchers and literary producers examining the circulation and production of small magazines in Sub-Sahran Africa. We’ve been following this AHRC Research Network, ‘Small Magazines, Literary Networks and Self-Fashioning in Africa and its Diasporas’, convened by Dr Madhu Krishnan (University of Bristol) and Dr Chris Ouma (University of Cape Town), reflecting the development and range of events that have opened and continued exploration of the possibilities of the small magazine form.

Read the second post in the series: Nathan Suhr-Systma ‘“A secret history of the nation”: Small Magazines at Writivism 2017’.

And watch this space for more to come…