AiW’s annual Caine Prize review series is back. We’ve been talking about prize culture for a long time at Africa in Words; Kate Wallis started off this series in 2013. In the coming days we are featuring reviews of the stories shortlisted for the 2018 Caine Prize for African Writing ahead of the announcement of the winner on 2 July. You can read previous years’ shortlist reviews and coverage of the Prize from AiW here as well as our coverage of the Anthologies. A series of events with the shortlisted writers are also planned in London (UK) this week.

At the beginning of “Wednesday’s Story”, the narrator says: ‘Men also tell each other the story of Solomon Grundy, but they never tell it well.’ She then proceeds to tell the story of Solomon Grundy the way men would—as a children’s rhyme in ten lines—and which she’s always thought to be a ‘particularly poor story’. Yes, it states facts, she says. And yes, as far as stories go, it possesses a ‘good, linear shape’. But ‘what does it really tell you anyway?’ asks Wednesday.

If I were to tell the story of “Wednesday’s Story” as Men would—to recall and relay its facts and to follow its linearity—I would fail. Wole Talabi’s meta-fictional short story, which is a meditation on, and which studies the mechanics of, the art of storytelling (and writing), does not allow for a conventional method of reviewing. From the opening itself, its narrator and author both reject pre-determined, prescriptive ways of storytelling—‘My story has a strange shape to it […] it bunches up in places and twists upon itself in ways that no good story should’ (my emphasis)—and hence urges the receiver of the story to abandon all rules of reading too. On the surface, this is the story of Wednesday, a female spirit-thing who inserts herself into Solomon Grundy’s story in order to save his dying wife—and the repercussions of her reckless but well-intentioned actions—but it soon becomes apparent that Talabi’s story is as multi-layered as it is manifold in its scope beyond the basic plot. 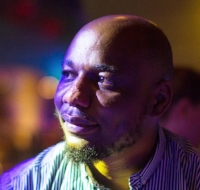 Perhaps the central question Talabi’s story, first published in Lightspeed Magazine (2016), poses is: What makes a good story?  The simple, straightforward answer to this would be, as Wednesday says, of a story she and her siblings have just finished telling: ‘It is a strange and sad story but it is a good story because we told it well’. So, while Wednesday suggests that telling a story well is one criterion, Talabi’s own work seems to reject that notion/approach as too simple.

Instead, Talabi takes the story form and tears it apart; not just to playfully point a compass at its own literariness and constructedness, but to ‘cleave the essence of things upon which all stories are written’—as Wednesday does, when she uses the timestone to tread between the world of Men and the world of Days, or spirit-things. Ultimately, however, Talabi is preoccupied not just with the liminal spaces between worlds, nor with prodding the fourth wall, but those between words—and reading between the lines becomes a rewarding experience. That is to say, his prose is a sophisticated balance of wordplay and words which can be read as poetry. Of the dying Atinuke he writes: ‘There is a constellation of gaping, pink stab wounds surrounding her prominent navel like so many unnatural lips’.

Several literary techniques and tell-tales are sprinkled within the story; while some are dissected, others are dismissed or discarded altogether. For example, Wednesday’s story has two beginnings: one way in is through intertextuality (‘one of them, appropriately enough, is another story’, she says), while the other opens with the ‘darkness of mind’—presumably writer’s block. It also has many middles (‘in some middles of this story’; ‘in some other middles of this story’; ‘in at least one middle of this story’); and children’s rhymes and fables, and plot digressions (‘I am sorry; this is not the story of the Iroko-man is it?’). These stories within stories, a sea of stories, float well in the world of spirit-things, while they would not in the world of Men. This is because ‘[men] are not made of stories as we are’, says Wednesday, the shape-shifter of stories. She also foregoes linear narratives for circular timestreams: (‘the story will happen, is happening, has already happened’; ‘Wait. I’m sorry, I’ve already told you how this story ends, haven’t I?’). Thus old literary tricks are rendered redundant.

Meanwhile, the author Talabi uses his own ‘power to enter the spaces between stories’ to untangle and understand issues of ownership and inheritance and authorship and intervention of stories. “Wednesday’s Story”, then, can be read as an ode to oral traditions of storytelling, stories to share, stories ‘to tell and hear’ and ‘hear and tell’. It can also be used to ask questions about the relationship between aesthetics and authority: ‘This story is badly shaped, but it is uniquely my story, and the burden of its telling is and always will be mine to bear,’ confesses Wednesday rather early into her story. Or to ask: how does one tell a ‘dark, dark story, full of pain and suffering’?

When Wednesday uses the timestone in a desperate act to alter this ‘dark, dark story’, she breaks the ‘author’s law’—‘perpetrating an abomination by attempting to amend the timestream, by trying to change the story’. It’s not long before she realises this:

‘This is the thing about stories, regardless of who tells them or how they are told: Every story is created by someone—the author and the finisher of its characters’ fates. Authors do not like their stories changed.’

In the end, Talabi’s work brings about a different, more disciplinary set of issues that authors and critics grapple with daily. What is an ‘African’ short story? Who tells it—and how is it told? Indeed, what is a Caine Prize short story? These questions have attached themselves to contemporary ‘African literature’ ad nauseam. Talabi’s story about stopping time and stopping death is a refreshing reminder that the author is very much alive—and that, when it comes to stories, he prefers possibilities, often otherworldly, to prescriptions.

The full text of Talabi’s story can be found on the Caine Prize website, here. You can also read — and listen to! — all of the shortlisted stories ahead of our reviews.

Wole Talabi is a Nigerian full-time engineer, part-time writer and some-time editor with a fondness for science fiction and fantasy. His stories have appeared in publications including Terraform, Omenana, Liquid Imagination, and The Kalahari Review. He edited These Words Expose Us, the anthology of Nigerian blog-site, The Naked Convos. He currently lives and works in Kuala Lumpur, Malaysia. He enjoys good stories and goes scuba diving whenever he gets the chance.

Sana Goyal is a PhD candidate at SOAS, University of London. Her research lies at the intersection of contemporary African literature in English, literary prizes, and women writers. When she’s not thesis writing, she works as a freelance book critic for Vogue India, Mint Lounge, India, and Scroll.in. She’s also the Reviews Editor of the third issue of CHASE’s Brief Encounters journal. She’s at home in Mumbai and London.

Like Loading...
‹ Books in Your Ears: On Literary Podcasts
Caine Prize 2018 Shortlist: A Review of Makena Onjerika’s “Fanta Blackcurrant” ›

Categories: And Other Words..., Reviews & Spotlights on...