Finding Fictions, Forging a Feminist Fantastic: Reflections on ‘This F-Word’, the 5th edition of the Aké Arts and Book Festival (Abeokuta, 14-18 November, 2017)

Last November, I had the pleasure of attending the 5th edition of the Aké Arts and Book Festival. Organised by the Lagos-based Book Buzz Foundation, Aké is a five-day cultural extravaganza that takes place in and around the imposing Arts and Culture Centre in Abeokuta, Ogun State. I had embarked on this trip – my first to Nigeria – with the hopes of finding some new books to read and of hearing some pearls of wisdom from writers and artists that might aid my PhD research, which looks at creative legacies of the Nigeria-Biafra war. However, I came away with much more than a few of the latest titles and choice quotes.

But before offering some reflections on this experience, I would like to make a brief theoretical digression. In an essay exploring the writings of female authors of the African diasporas, Brenda Cooper conceptualises their lives and works as expressing a form of diasporic and feminist fantastic.1 Focusing on a collection of writers that includes the likes of Aminatta Forna, Helen Oyeyemi and Nnedi Okorafor, Cooper differentiates the fantastic from magical realism: ‘[u]nlike magical realism, which spirals around a tense balance of equilibrium between everyday reality, history, and magic, the fantastic propels us into another realm all together, where the framework of the world of the everyday is transformed’ (151).

Now, it might seem odd to begin a write-up of an arts and book festival by quoting from such a piece of fantasy-inflected literary criticism. To allay readers’ concerns, I can give assurance that I do not intend to portray my experience of the Aké Festival as akin to being transported to outer space or some alternate universe. However, I do find Cooper’s formulation of a feminist fantastic rooted in African experiences suggestive of the programme and ethos of this edition of Aké. The theme of the 2017 festival was ‘This F-Word’, and it is certainly true that issues and questions pertaining to feminism acted as the major organising principle for the programme of book readings, panel discussions, film screenings and performances on offer. However, as Aké 2017 unfolded, this specific focus began to transform into a broader, multi-layered conversation, forging a creative and collaborative space that I contend can be accurately described as feminist fantastic.

Allow me to elaborate.

A notable high point of the festival’s opening ceremony was a moving performance by the poet Poetra Asantewa. While I didn’t manage to note down the title of the verse she recited, I was struck by the febrile potency of this line:

Aké had barely begun, but with these words one could sense that a form of feminist fantastic had already started to take shape in the room. 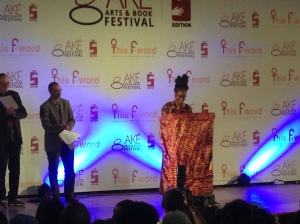 And this moment of poetic magic took on a more tangible resonance with the prize giving ceremony for the inaugural Nommo Awards, which celebrate speculative fiction written by Africans. This not only introduced another F-word – fantasy – into the discourse of the festival, but also gave visitors and guests alike an opportunity to hear from a leading light of African speculative writing, Nnedi Okorafor. After receiving the Nommo award for best novella for her work Binti, Okorafor warned – tongue only half in cheek – that we should enjoy ourselves while we can because we are all going to be destroyed by artificial intelligence. On a more serious and positive note, Okorafor subsequently revealed that she was motivated to write Binti because she had wanted to tell the story of an African girl who goes into space on her own terms.

At this point in the proceedings, it became clear that the Aké Festival would not simply act as a platform for artists to meet and explore their work, nor this particular edition just a forum for discussing the situation of African women today. The opening ceremony revealed that Aké would also function as a creative forge in which different F-words – from feminism to fantasy and beyond – would begin to interact and meld.

A variety of different F-words presented themselves over the course of the event. I attended a panel discussion called ‘Directing Her Narrative: African Stories’, in which a group of female filmmakers from Nigeria and South Africa explored the challenges and opportunities for women in the industry. Issues regarding finance and facility quickly came to the fore, and Tope Oshin called for bright lights in the industry to nurture other bright lights in order to fan the flame of female filmmaking on the continent. While I only caught the last few minutes of the ‘Women and Spirituality’ panel, I was keenly struck by Mona Eltahawy’s proclamation, in response to a question, that women ‘want our own F***ing cake’, adding that patriarchy hurts and oppresses everyone. A forge for F-words, indeed.

Another highlight was Molara Wood’s interview with Ama Ata Aidoo on the final evening of the festival. Aidoo spoke generously about her life, work and feminism, and even adapted a line from an Aretha Franklin song to sum up her reaction to receiving enthusiastic greetings from other women during the festival: ‘they make me feel like a natural woman’. Arguably the most moving moment of the week came towards the end of the interview, when Aidoo paid a quiet but emotional tribute to some other pioneers of African women’s writing, from Flora Nwapa and Mariama Bâ to Buchi Emecheta, all of whom have passed away and are sorely missed.

Aké did not only showcase the talents of female writers and filmmakers, however. An array of female-led music acts – including Celeste, Joyce Olong and the legendary Salawa Abeni – performed at an electrifying concert held on the eve of the festival. From the realm of visual art, a provocative and wide-ranging exhibition titled The Female Form displayed the creative work of women from different parts of Nigeria. I was also lucky enough to take part in Project Inspire!, a Book Buzz Foundation initiative where festival speakers and guests go into local schools to talk about their work, to encourage the students in their reading, and to donate books. I travelled to St. Leo’s College in Abeokuta with the writer Hannah Azieb Pool, and was myself hugely inspired by the enthusiasm with which we were greeted.

While, as I hope to have demonstrated, my time at Aké was overwhelmingly positive, none of this would have been possible without Aké’s founder and champion, Lola Shoneyin. In addition to her role as organiser-in-chief of the festival, Lola is also a writer (a brilliant play adaptation of her novel The Secret Lives of Baba Segi’s Wives was performed during the festival by Maimouna Jallow), an educator and a publisher (she founded the Lagos-based publishing house Ouida Books last year). To recall Cooper’s portrayal of a feminist fantastic in African women’s literature, Lola’s various endeavours reveal her to be a real life Super Woman of Nigerian and African art and letters.

To sum up, the Aké Festival provides a vital arena for creatives and champions of African arts and literature to meet, debate and collaborate. It was an experience that propelled me, and my fellow participants, to a fantastic world of feminism and beyond.

Matthew Lecznar is a PhD student at the University of Sussex, and a former member of the editorial team at Africa in Words. He would like to extend his heartiest thanks to Lola and the Aké team for all their help, to the many warm and wonderful people he met during the festival, and to the University of Sussex and the Consortium for the Humanities and Arts in the South-East (CHASE), whose generous financial support enabled him to make the trip.