The Quai Branly Museum (Musée du Quai Branly) in Paris currently features the exhibition “African Roads (‘L’Afrique des routes’)” from Jan. 31st – Nov. 12th, 2017. In the introduction, the curators propose to challenge the preconception that Africa is a continent without a history. The exhibit explains, “Although the preconceptions persist, the facts themselves are undeniable: Africans have never lived in isolation. Although ignored for a long time, exchanges within Africa, and outside of its borders, began thousands of years ago, well before independence, colonization, and the arrival of the first Portuguese ships at the end of the 15th century.” The exhibition brings together a diverse collection of artifacts, artworks, and texts from or about Africa to represent the global significance of African cultures and resources spanning the known historical record. Not only does it endeavor to highlight the important role of African communities and resources, which range in the exhibit from ivory, pearls, and copper to labor, music, cartography, and botany, it places Africa at the center of economic and social development across global history.

The Quai Branly Museum’s “African Roads” employs a macro-historical approach to illustrate the complex issues of African circulation over time. This approach presents an engaging story of the productivity and resourcefulness of societies across Africa, while raising questions concerning European involvement in the exploitation of these various networks of circulation. To convey the scope of activity that unfolded across Africa, the exhibition presents a dual sense of circulation, both within the interior of the continent across a multitude of landscapes such as deserts and forests, and to the exterior across the Mediterranean to Europe or the Indian ocean to the Middle East or Asia, and then the Atlantic to the Americas. Furthermore, the notion of roads is interpreted both literally, as in trade or travel routes, as well as metaphorically to demonstrate cultural and social exchanges. 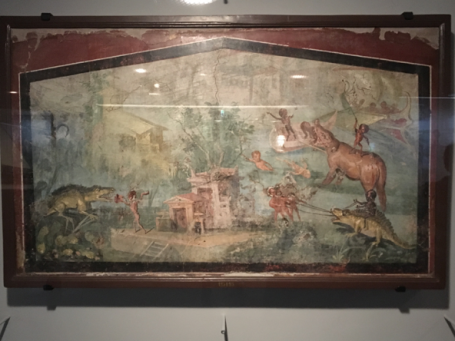 An example of these converging networks of circulation is seen in the display of a fresco from the 1st century A.D. uncovered in Pompeii, featuring a group of Pygmies hunting and fighting crocodiles and a hippopotamus. The fresco demonstrates how ancient Greeks and Romans were inspired by ideas of Africa through a past of shared cultural as well as economic exchange and contact. The accurate depiction of wildlife specific to Sub-Saharan and central regions of Africa helps one to understand the vast social connections already established by this early period, well beyond the North African coast. Indeed, communities across the continent are as culturally and socially productive as the Greek and Roman civilizations during their respective eras. This is validated in the exhibit’s presentation of a decorative rock sculpture featuring a giraffe discovered in southern Algeria dating between 6200-2200 B.C., a Nubian engraving thought to represent religious, administrative, and political value all at once from 1550-1070 B.C., or an ornamental vase from Ethiopia believed to be crafted in 320 B.C.

Notably, this exhibition boasts as its Scientific Advisor the esteemed French historian, Catherine Coquery-Vidrovitch, who has worked extensively on African history and the history of colonization. In organizing the collection, the displays are arranged by themes and concepts such as “Commercial Roads,” “Spiritual Roads,” “Aesthetic Roads,” “Colonial Roads,” etc. “Commercial Roads” explains and exhibits how gold, ivory, and slaves were consistently the three biggest exports to Europe and Asia. In “Spiritual Roads,” one sees an example of Africa’s global circulation by presenting how influences from the gods of the Yoruba religion are still found in Brazil and Haiti. The “Aesthetic Roads” section discusses the exchanges of language, migration, and technology. The exhibition’s last major section on “Colonial Roads” provides a general overview of Europe’s acts of exploitation and the spread of the Atlantic slave trade.

Yet, despite the museum’s location in the French capital, very little attention is given to France’s specific role during the colonial period or after, and almost no attention to the ways Africa has assuredly circulated in French culture and history. One could look to the music industry to see how pop, R&B, and rap genres are dominated by African influences. The European fashion industry persistently invokes theme and trends of traditional wardrobe and jewelry originating from African societies without crediting the source of their “inspiration.” Or perhaps, the museum could have examined the African culinary influences in France, ranging in diverse dishes from Senegal to Ethiopia, not to mention couscous and mint tea.

The Quai Branly Museum’s “African Roads” exhibit addresses issues of circulation in different time periods by employing a macro-historical perspective. The exhibition’s narrative of Africa’s global impact assorted by the various themes of the collection help obtain the objective of centering Africa in World history. In undertaking to represent the circulation within and beyond the continent from 6,000 B.C. to the present, the exhibition can seem to condense complex events and issues into compressed sections under the given themes. Overall, “African Roads” is an engaging display of the long history of creativity and ingenuity across the African continent that has shaped global development from the very early periods of human civilization. The interesting displays of artwork and materials exhibited by “African Roads” are an effective means of illustrating new understandings of Africa’s significant global contributions to a global audience. 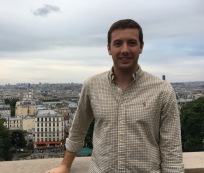 As a PhD student in French & Francophone Studies at UCLA, Connor Pruss studies Francophone writers of an African origin. He is interested in the way these writers evoke themes of education and migration. Specifically, his research examines how discourses and themes of education are used to critique colonization as well as the migrant experience. Additionally, he is interested in literary journals as a cultural and educational form in postcolonial Africa.

Like Loading...
‹ ‘A secret history of the nation’: Small Magazines at Writivism 2017
Event: Bertha DocHouse presents: Thank You for the Rain ›