Home › Reviews - Events › “German Colonialism: Fragments Past and Present” at The Deutsches Historisches Museum, Berlin, 14 October 2016 to 14 May 2017

“German Colonialism: Fragments Past and Present” at The Deutsches Historisches Museum, Berlin, 14 October 2016 to 14 May 2017

“In the late 19th and early 20th century, the German Empire was one of the largest European colonial powers,” states the Foreword to the catalogue for the Deutsches Historisches Museum’s exhibit on German colonial history. Unlike France and Britain, Germany lost its colonies after World War I, so that introductory sentence is not celebratory, nor is it a lead-in to simple apology – the exhibition takes a deliberate, painstakingly self-conscious, approach to critically engaging with colonial history. It resists a simplified narrative of the past, explicitly questioning how the titular “fragments” of history can be arranged into narrative(s), and also encourages reflection about “the post-colonial present.”

The exhibition itself is large in many ways. Geographically, it documents Germany’s colonial empire across the globe – from Africa to Oceania – though with a focus on German presence on the African continent. The historical scope, too, is vast, spanning from the 1500’s to present. Its size – a display of over 500 diverse objects and artifacts, including photographs, paintings, sound archives, maps, as well as period curiosities such as a 19th century board game designed to promote colonialism – means that working through the collected material can take several hours. Each object is accompanied by detailed information and, in many cases, curatorial remarks on related issues, such as broader historical context or discourse analysis.

Structurally, the exhibit proceeds through eight display sections that loosely follow the chronology of German colonialism, and underline key themes related to narrating that history:

A T-shirt – part of contemporary efforts to demand official recognition and apology from the German state for the genocide of Herero and Nama people.

More than a simple account of the history, the exhibit addresses how colonial mentality and ideology developed over time, and how it progressively translated into individual actions and institutional policies. For example, the show opens with a timeline giving a bird’s-eye-view on colonialism, but rather than noting specific events, it highlights key changes that influenced the course of history: developments in the sciences, technology and the arts, evolution of political discourse and pro-colonial propaganda tools. Throughout the eight exhibit sections, the focus is not just on how Germany dominated colonized territories. Rather, the displays give insight into local dynamics that influenced the course of colonialism: for example, the varied alliances and relationships between local leaders and colonized populations, as well as representatives of colonial administration, military personnel, European explorers, missionaries, and settlers. The exhibit considers the motivations of different actors and their agency (including documenting resistance and protest). It also draws attention to the various forms of domination and violence (on display are letters by German politicians debating how to control local peoples, petitions by local leaders against German abuse, as well as actual instruments of violence). At the beginning of the show, curatorial commentary, written large and prominent on one wall, draws attention to the power of language: “As far as possible, we have made an effort to avoid reproducing racist and pejorative language of the colonial discourse…” it begins.

The curatorial team made an effort to maximize access to the content of the exhibit. Information throughout is presented in both academic and colloquial German, and also translated into English. A large part of the information is available in braille and a number of objects on display can be touched.

The exhibition is testament to growing interest in Germany’s colonial past. Hans-Martin Hinz writes in the exhibit catalogue:

The main priorities of ‘coming to terms with the past’ in Germany, focus on the World Wars of the 20th century, on the Holocaust and on dictatorship. Most Germans today…are unaware that already in the 17th century people in Brandenburg and Prussia participated in the Atlantic slave trade, or that the late 19th century the German Empire had colonies in Africa, East Asia and the South Pacific, and was thus one of the global actors in missionizing, conquest, and territorial ‘valorization’ in the interests of colonial power and colonial exploitation. 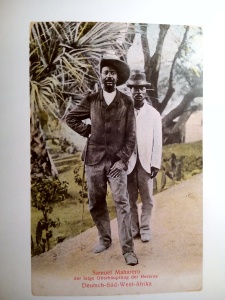 An example of a post-card sent by German soldiers from the front during the colonial war with the Herero and Nama.

“The colonial legacy in the widest sense is controversial. It is subject to claims and challenges…and requires appropriate responses to a history that is both divided and shared,” states the closing text of the show. Massive in size and scope, the exhibition’s honest reflection on the challenges of confronting the past leaves an indelible mark on visitors’ conscience. It not only teaches, as it were, a thus far unrecognized history, but facilitates visitors’ personal working through the (their) past. Certainly, this at once infuriating and painful history could have been dealt with in simpler terms or ignored altogether. The Deutsches Historisches Museum’s exhibition can be a model for rigorous intellectual engagement with the past.

Calling all artists! Sign up by the end of today for the 2020 National Arts Festival Fringe, South Africa. Follow the link in our bio! 🎭 🎭 . . Photo by Mark Wessels of Umnotho The Economy at #NAF2019 . . #NAF #NAF2020 #NationalArtsFestivalFringe #SouthAfrica #fringe #arts #artsfestival #markwessels #cfs #callforartists #callforart #callforentry #callforsubmissions
For all ‘elefriends’ - travel into the new semester with Dan Wylie’s book Death and Compassion: The Elephant in South African Literature @witspress 🐘🐘 . . . #Academia #SouthernAfrica #AiWPicks #bookstagram #AirportReading #AiWReads #AfricanLiterature #danwylie #witsup #elephant #deathandcompassion #SouthAfrica
“I stare at the ceiling, watching as the machine covers the new stain. The triangle appears not long after that.” . . 🪐 Begin #2020 by stepping into a different world with SF by @mntshanga 🪐 . . Find extracts on @joburgreview @Umuzites . . #bookstagram #leftovers #speculativefiction #masandentshanga #triangulum #maths #comingofage #africanliterature #AiWReads
"The idea of a singular hero and a manifest destiny just makes us lazy. There is no destiny. There is choice, there is action, and any other narrative perpetuates a myth that someone else out there will fix our problems with a magic sword and a blessing from the gods." . . 🌹The perfect cosy Friday afternoon reading Rosewater by Tade Thompson🌹 . . Get ready for a mini spectulative fiction series from us! 🌠☄️ . . #rosewater #tadethompson #sf #spectulativefiction #nigerianliterature #africanliterature #nigeria #bookstagram #books #wormwood #aiwreads
Fairy lights still on for Morrison @chattobooks 🌌 . . #Essays #Speeches #Meditations #AiWFestivePicks #LeftOvers #2020 #AiWReads #bookstagram #tonimorrison #mouthfullofblood
Last of the holiday lights and the holiday reading @EditionsJCLattesLeMasque @abdourahmanwaberi.official 🎄 . . #AiWFestiveFaves #bookstagram #Waberi #festive #12daysofchristmas #africanliterature #christmasbooks
My Tweets