Home › AiW Q&A › Q&A with Thulani Lupondwana on her Facebook Fiction, ‘Diary of a Cheating Husband’

Q&A with Thulani Lupondwana on her Facebook Fiction, ‘Diary of a Cheating Husband’ 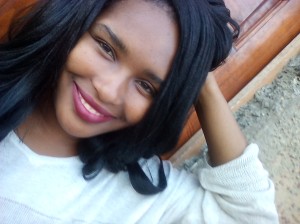 At 23 years of age, Thulani Lupondwana is one of the few Facebook diary writers from South Africa who has continued to capture readers’ interest and “likes.” Following the enormous success of Mike Maphoto’s Diary of a Zulu Girl in 2013, a number of southern African writers took to Facebook to write their own diaries, from Thabang Machona’s Diary of a Kasi Taxi Driver to Mbasa Yona’s Diary of Icherrie Yomjaivo. As the form of the online Facebook diary has spread throughout southern Africa over the past few years, it has become a genre patronized overwhelmingly by young female writers like Lupondwana. These writers are using Facebook fiction to describe similarly felt experiences across African cities—from heartache and abandonment, to the traditions and new expectations that women must navigate.*

Last week, I met up with Lupondwana in Port Elizabeth, where she is studying for her degree in early childhood development, to discuss Diary of a Cheating Husband, which she writes in a mix of English and isiXhosa. Like many diary writers, Lupondwana has since moved beyond the original diary to several follow-ups on the same page, including Life Without My Husband and, most recently, diaries that tackle more serious issues, from albinoism to abuse.

Stephanie Bosch Santana for AiW: Let’s start at the beginning. How and when did you start writing your diary?

A: I started writing Diary of a Cheating Husband in June, 2014. I wrote it because someone broke my heart. But then, the main reason I wrote it is because I suffer from clinical depression. I felt like no one knows about that in black communities. It’s taboo. It took my parents a long time to actually realize that it’s a thing. If I can write about my heartbreak and still find a way to educate people about this…Although it took, I think, a year before the first person liked my page. But I was still writing because it wasn’t really about the recognition.

[Since then] it’s quite nice to get the feedback and to hear how people have learned about it over the years because now I’m writing a new story about multiple personality disorder and no one even knew about that. It wasn’t really a hit though because other people were like, “no that doesn’t exist” and whatnot. But I didn’t stop. I wanted to teach them. Well, I wouldn’t say teach because I’m younger than most of my readers, but I’m really liking the impact I have on some of them.

Q: Can you tell me a bit more about the first diary?

A: The first one was about Entle. That’s my friend/me. But she got married at 18, so I was always against that. Another reason I wrote the diary was to share my opinion. It’s not the nicest thing to [get married] if you’re not ready emotionally or never really lived your own life. So the character gets lost in seeking validation from the guy. Whatever he does she feels the need to do it. Whatever he says is bad for her she doesn’t ask anything. And I’m quite a feminist so yeah, that’s the problem with me. My female characters always have to be strong. Sometimes they are too strong then it becomes unrealistic because not many women like standing up for themselves because we’ve been taught that the man is always right. In the first diary, Diary of a Cheating Husband, I always made sure that the women are vocal, but I also made sure to keep it realistic in the sense that they go through struggles. You lose yourself, but through friendship and family you can overcome whatever happens.

Maybe it’s not that bad writing about romantic stories although I wish I wouldn’t. It’s what everyone else wants. I think sometimes they like this whole knight in shining armor thing but they forget that you can actually rescue yourself without needing a man. And every time I’ve tried to raise that point it fails. But maybe somewhere out there there’s a reader that’s like, “Thank you.” I hope so because it’s weird not having anyone saying, “I enjoy being single” out there.

Q: You said it took almost a year to get a like on your book, when did things really take off?

A: Early 2015, that’s when I got my first “like,” and I was on chapter 29. Because I didn’t have readers I wrote every once in awhile, just to make it long. So when I got my first reader, I think she started sharing, because now she’s my friend. I was living in Joburg at that time, and then we decided to meet up because she was the only person that was actually interested in what I had to say. She started sharing my story on her timeline. I think sometime in May I got 2,000 people, and then the next thing I knew I was on 21,000, and I was like, what?! And now, I’m on 60,000. And it’s a lot of people. It scares me because there are actually a lot of people that are reading what I have to say. I used to read Mike Maphoto’s blog, and I thought how does he do it? But now I’m like OK, Rome wasn’t built in a day after all. I’m starting to like it.

Q: Do you have readers from other parts of Africa?

A: Yes, and as much as I’m welcoming it just sucks that I have to translate. Because some things are better said in Xhosa. If you’re swearing and you have to translate it doesn’t have the same impact. But I like that I have people outside of South Africa that are actually reading my work.

Although Lupondwana is contemplating stopping writing to focus on school, she worries that her followers might not be there if she decides to come back. Of the diary she says, “It’s been my life. I’m attached to it.”

*For more on these diaries see my essays “New Pan-Africanisms Online” in Wasifiri 88, Winter 2016 and “From Nation to Network: Blog and Facebook Fiction in Southern Africa, forthcoming in a special issue of Research in African Literatures on post-national literatures.