Why is Translation Important?: Publishing African Literature Across Languages

As part of Writivism 2016, University of Bristol, Stellenbosch University and the Centre for African Cultural Excellence collaborated to bring together an Arts Management and Literary Entrepreneurship Workshop. This four-day workshop held in August in Kampala was set up with the aim of giving 35 aspiring and early career arts managers and entrepreneurs in the African literary and cultural scene the opportunity to build market knowledge, develop project management skills, share best practice, and network with colleagues from across the continent. Each day of the workshop focused on ways of setting up, thinking about and sustaining a different kind of literary initiative. As part of a session on ‘Publishing Translations’, Edwige-Renée DRO, Felwine Sarr and Moses Kilolo all spoke about their experiences of working to publish writing across languages and shared reflections on the aesthetics, practicalities and driving forces behind the different initiatives they’ve been involved in. Africa in Words is happy to be able to share Edwige-Renée DRO’s inspring contribution to this conversation.

In fact, on that last point, I have an anecdote. There is an Ivorian writer of quite high status – I shall not mention his name – who spoke to a friend of mine about the possibility of having his book translated. My friend spoke to me about it and I contacted the writer. It transpired, however, that this writer of high status not only didn’t want to pay me for my services but wanted me to do the work of translation alongside proposing the book to publishing houses. Well, I don’t need to tell you that I did not take that project on.

So, what is it that writers and publishers value in the translation process and how does that impact what writing gets published in translation and where? The reasons why we translate could be a mixture of all these things I’ve mentioned. But what I want to share here is why I think this work of translation is so important. In Africa, translating our work is of vital importance because it connects us to one another and, through that, we get to know each other. 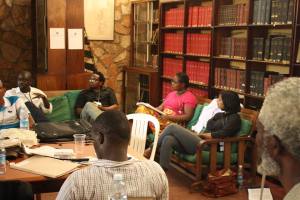 Beyond making their names known, the translations of the works of Ahmadou Kourouma, Camara Laye or Chinua Achebe helped connect African readers – at least in the sixties and the seventies. The disillusionment that Kourouma writes in Le Soleil des Indépendances (The Suns of Independence), although in reference to the Ivorian context, is something that other Africans experienced after the sun of the independences rose on most African countries in the sixties. The narrative of the childhood of Camara Laye in Guinea might have made a Nigerian reader go, ‘Ah, me too! I relate to that.’ And so, Guinea is not a country out there – it is a country a connection is built with. How many African anglophones today would have heard of Véronique Tadjo or Alain Mabanckou were it not for the work of translators like Wangui wa Goro, Sarah Ardizzone and others?

I know that there is the issue of budget. As the director of Danbé, a new collection set up in April this year by l’Harmattan Côte d’Ivoire, I had to tell a writer a few weeks ago that we did not have the budget to translate her work. So, I too am confronted with the issue of budget and I’m not asking the Caine Prize to commission a translation of every submitted story. However, what about doing more work to create dialogue across languages on the continent? This year the Writivism Short Story Prize appointed French-speaking judges to judge the French entries, and this meant all the shortlisted stories got translated. As Africans, friends and partners of Africa, let’s work to see how we can get more translations out there.

My contract with l’Harmattan runs out in 2018 (in that time I will continually be on the hunt for good work – just throwing that in there!). It is my commitment to myself to translate two novels into either English or French in order to carry on with that work of building connections that was started in the sixties and the seventies. Could other publishers on the continent and beyond commit to setting up a budget to get even ONE book translated?

Edwige-Renée DRO is an Ivorian writer. In December 2013, after more than a decade in England, she made the decision to return to Côte d’Ivoire because she couldn’t be safely ensconced abroad and pretend to be contributing to the development of her country. Edwige has had a number of short stories published on platforms including African Writers and in magazines including Prufrock, Prima and Ankara Press’s Valentine’s Day Anthology. She is also a laureate of the Africa39 project, a project which selected 39 of the best writers under the age of 40 from sub-Sahara Africa. Edwige is the 2015 PEN International New Voices award winner and was shortlisted for the Miles Morland Writing Scholarship 2014. She is also a judge for this year’s Etisalat Prize for Literature. As well as being a writer, Edwige works as a translator. She worked on the translation of Les Cités Fantastiques (The Fantastic Cities) – a coffee-table book featuring poems and paintings by Werewere Liking.