Home › Academic Research › Eric 1Key’s Entre 2: a ‘story about a hero and a coward’

AiW Note: This is the third in a series of four posts in which Ceri Whatley discusses Rwandan artist Eric 1Key’s album Entre 2, as well as presenting original translations of 1Key’s lyrics from Kinyarwanda and French to English. We are delighted to publish these posts and lyrics with the permission of Eric 1Key. 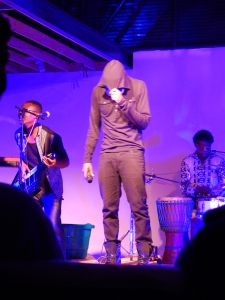 (real name Eric Ngangare) is one of Rwanda’s most exceptional creative talents. He is a multi-lingual hip-hop poet, spoken word artist, blogger, and advocate of Kigali’s blossoming live music scene. Born to a Rwandan mother and Congolese father, 1Key has lived in the Democratic Republic of the Congo (DRC), the Republic of Congo, Uganda, and Rwanda – where he lives today. Between November 2014 and February 2015 – and while living in Kampala, Uganda – 1Key created his debut album Entre 2 (“Between Two”).

Entre 2 – which boasts eleven carefully constructed tracks – is reflective of complex contradictions and dichotomies in 1Key’s own life. Throughout the album, we hear multiple voices singing and rapping in Kinyarwanda, French and English – as well as in Kiswahili and Lingala – reflecting the new Kigali today. Indeed, Rwanda’s capital city is home to vast numbers of Rwandan returnees, who grew up in neighbouring countries – as well as in Europe and North America – and then returned to Rwanda after the 1994 Genocide, speaking a variety of different languages.

As a PhD researcher interested in musical connections between Kigali and Kampala, I have enjoyed the privilege of getting to know Eric. Through his album, 1Key took me on a journey through a world of traditional Rwandese melodies, soulful folk, celebratory rock, bouncy reggae beats, and conscious hip-hop poetry. He introduced me to Rwandan and Ugandan music producers and artists – with whom he collaborated with on the album – who live in Rwanda, Uganda, France, Sweden, the UK and Canada. But most importantly, 1Key helped me to translate and “decode” his words. His poetic, playful, multi-layered, seductive, defiant, honest words.

I hope that this series of song reviews – complete with lyric translations and audio links – enhances your understanding of 1Key’s outstanding album, and that you enjoy it as much as I do.

This is the album’s middle track (track 6) and, like the album, is entitled Entre 2. Within his words, 1Key explores the “Between Two” motif, with clear examples in the hook:

Never and forever”. (Translated from French to English)

In Entre 2, 1Key carries us into the second half of his album, which is more heavily influenced by hip-hop, and which exudes a more serious mood. The music opens with an electronic piano chord sequence, which is modified to sound like female voices and is repeated throughout the track. The chord sequence is dramatized by the click and then bang of a gunshot, over which 1Key starts to rap in French, his voice deep and his statements punchy. At the same time, the music thickens. We hear high-pitched piano notes, creating a siren effect, and then a sharp knocking sound. Next, a series of metallic rhythms are layered in, building a sense of drama as the story unravels.

This is a story about a hero and a coward. In the first verse 1Key pays homage to his Hero, a “Wise soldier armed with vocal chords/… defender of virtue”. (Translated from French to English) He says:

“You’re not this butterfly with flamboyant colours

Sailing between the winds of trends

You’re a chameleon, hooked on your own branch

You observe the world in every direction

Within his words, 1Key reveals complex contradictions and dichotomies. While butterflies are beautiful in appearance, they are fickle and easily manipulated. On the other hand, the chameleon has qualities of a hero: he is defiant, he thinks independently, and he takes action. But he suffers for his heroism. This raises an important question: should butterflies (aka ordinary Rwandan citizens) behave more like chameleons, despite the sacrifices that would involve? And if the butterfly were to represent “Rwandan progress”, just how much substance is there? In Rwanda, conversations about politics are generally met with caution, and it is extremely rare (and potentially dangerous) to openly challenge the status quo. Having said that, the question of substance is reflective of conversations that I have had with many Kigalians. While these Rwandans are proud and optimistic about the extraordinary growth of Kigali, they also understand that rural Rwanda (home to approximately 90% of the population) is a completely different reality. Within Kigali, citizens have been witnessing the mushrooming of new, shiny buildings and expensive coffee shops, restaurants and gyms. As inequalities deepen, many people ask: “But who is this beautiful city being built for?”

In his termite analogy, 1Key addresses additional concerns with Rwandan society. Termites live as one, which speaks to the Rwandan Government’s policy of National Unity, an idea which is also prevalent in Rwandan popular culture. And yet 1Key’s egocentric termites devour each other mercilessly. According to 1Key, this is an honest reflection of contemporary Rwandan society (or indeed any capitalist society), where its citizens habitually exploit and take advantage of each other in their increasingly individualistic attempts to gain money and subsequently status.

In the second verse, 1Key adopts the persona of the Coward, or the ordinary citizen. He describes hypocritical smiles and friends who stab him in the back, evoking our sympathy and understanding. Simultaneously, he admits to being passive and lazy, telling us: “Nothing drives me besides alcohol, sex and drugs.” (Translated from French to English) Like the chameleon, 1Key observes his world in every direction. He certainly articulates a more intelligent and nuanced view of contemporary Rwandan society than what we are used to hearing (or reading). 1Key doesn’t want to be a commercial “copy-cat” recording artist for radio and TV. Through his art, he expresses himself, explores ideas, and heals himself (and others).

In many ways, 1Key is a pioneer: aesthetically, his music is original and experimental, and his lyrics are fresh and provocative. A fierce promoter of Kigali’s live music scene, 1Key essentially wants to start conversations. He told me: “It’s OK to have different opinions, but we don’t talk about them.” 1Key is aware that his art may cause controversy, telling me: “Not all Rwandans are ready for me!” Indeed, his “disobedient” character – which is untypical in Rwanda – and tendency to challenge norms, as well as his body piercings and tattoos, leaves many Rwandans bewildered. 1Key laughs this off, defiantly telling us: “You want a joke? Apparently I belong to an asylum/I write crazy stuff HAHAHAHA”. (Translated from French to English)

Entre 2 was produced by Barick at his home-studio in Kigali. Barick is featured in the hook.

Eric 1Key (real name Eric Ngangare) is a multi-lingual hip-hop poet, spoken word artist, blogger, and advocate of Kigali’s blossoming live music scene. His album – along with his other poetry and music – is available on Soundcloud: soundcloud.com/eric1key – and for sale on digital stores iTunes, Spotify, and Amazon. Eric 1key is very active on social media where you can find him discussing and debating all kinds of things. For updates and live info, follow Eric1key on Twitter: @eric1key, Facebook: Facebook/eric1key, or email for bookings at ericonekey@gmail.com. Additional song reviews by Ceri Whatley can be found on Eric 1Key’s Blog: https://eric1key.com/ 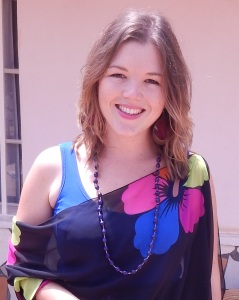 Ceri Whatley is a PhD candidate in African Studies and Anthropology at the University of Birmingham, UK. Her research explores “musical traffic” – both physical and digital – between Kigali-Rwanda and Kampala-Uganda, with a particular interest in the construction of new Rwandan identities, post-1994 genocide. While conducting over 12 months of ethnographic research in Rwanda and Uganda, Ceri undertook Kinyarwanda language training. She is currently analysing the rich corpus of data collected during fieldwork, and looks forward to completing her thesis. Ceri is funded by the Arts and Humanities Research Council (AHRC-M3C) and can be contacted on cnw604@bham.ac.uk.

Up on Africa in Words now is a dip in and through our site archives and some Februarys past and present. . . We look back at an early piece in 2013 by our founder, Nara Improta, discussing the conservation of archives and manuscript tradition in Mali’s historic city Timbuktu, as well as our recent Instagram Stories on the generous day programme for the ‘JM Coetzee: Scenes from the South’ exhibition launch at Amazwi South African Museum of Literature in Makhanda, and our very own Tom Penfold's AiW review of Jay Pather and Catherine Boulle’s edited collection Acts of Transgression: Contemporary Live Art in South Africa. . . Check out the link in our bio for the full recap! . . 📸: ‘A cache of African manuscripts stored in Abdel Kader Haidara’s home, 2009'- Brent Stirton/Getty Images, NYTimes, April 28, 2016, and pictures taken by our very own Katie Reid and Catherine Knox's photograph of Coetzee, both from the exhibition at the the Amazwi South African Museum of Literature in Makhanda (Grahamstown). . . . . #timbuktu #archives #manuscript #tradition #mali #history #conservation #jmcoetzee #coetzee #birthday #exhibition #amazwi #SouthAfrica #southafricamuseumofliterature #literature #books #bookstagram #grahamstown #catherineknox #actsoftransgression #recap #february #scenesfromthesouth #throwback
We are excited to share that the @timeofthewriter festival will run from 16 - 21 March this year with writers such as @fred_khumalo, @iamkeletso_m, and @siphiwomahala! . . 🖱️Click the link in our bio to find out more! 🖱️ . . 📸: Time of the Writer FB - follow @timeofthewriter for updates . . . #timeofthewriter #universityofkwazulunatal #writersfestival #literaryfestival #festival #fredkhumalo #keletsomopai #siphiwomahala #candicemama #jennifermakumbi #remyngamije #haskashyyan #cynthiajele #shafinaazhassim
The Nigerian actor Tope Tedela and director Akinola Ogunmade-Davies are invited to be part of the Berlinale Talents- the annual summit and networking platform of the Berlin International Film Festival, which takes place Feb 22-27 ✨ . . 📸: The okapi represents the unity and diversity characteristic of the collective in this year’s key visual, developed by Berlin designer Sonja Jobs. . Read the article in our bio for more info! . . @topetedela @akinoladaviesjr @berlinaletalents #berlinale #berlinaletalents #berlinale2020 #topetedela #akinoladaviesjr #film #art #okapi #nigeria #nollywood #nigeriantalent #berlinfilmfestival
"We die. That may be the meaning of life. But we do language. That may be the measure of our lives." - the beloved visionary, Toni Morrison, born on this day in 1931 💜 . . 📸: Francois Guillot / AFP . . . . #tonimorrison #birthday #africanamerican #africanamericanwriters #books #bookstagram #hero #beloved #bibliophile
Our current read is Washington Black by Esi Edugyan 📖 . Set in the 1830s, Washington Black is an epic, historical novel. It begins on a slave plantation in Barbados and transports its young protagonist, Wash, off the island and onto a journey around the world in pursuit of freedom and the man whose approval he so desperately seeks. . . #washingtonblack #barbados #esiedugyan #currentlyreading #bookstagram #books #bibliophile #caribbean #carribeanliterature #1830s
#FridayThinking writing wisdom from Margaret Busby, Ghanaian-born publisher, editor, writer and broadcaster. Busby's Daughters of Africa and her 2019 follow-up New Daughters of Africa have been described as 'indispensible' and 'a landmark'. . . . #margaretbusby #daughtersofafrica #newdaughtersofafrica #busby #wisdom #quote #QuoteOfTheDay #quotes #thoughts #books #bookstagram #thinking #landmark #ghana #africanliterature
My Tweets