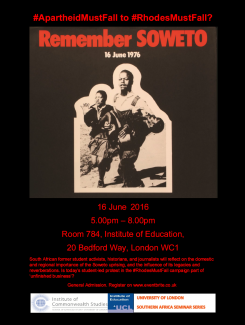 On 16th June 1976, peaceful student protest at Afrikaans language education in the Soweto township outside Johannesburg was brutally dispersed by the South African riot police. This event and its aftermath proved to be the inflection point in the wider regional liberation struggle against white minority rule.

South African former student activists, historians, and journalists will reflect on the domestic and regional importance of the Soweto uprising, and the influence of its legacies and reverberations. Is today’s student-led protest in the #RhodesMustFall campaign part of ‘unfinished business’?

For any further questions about this event, please contact Dr Sue Onslow (sue.onslow@sas.ac.uk )

Register for free tickets on eventbrite.

Like Loading...
‹ It’s Not Easy Being Green: A Review of Henrietta Rose-Innes’s Green Lion
The Truth outside Context: Jumoke Verissimo reviews Elnathan John’s Born on a Tuesday ›