It’s Not Easy Being Green: A Review of Henrietta Rose-Innes’s Green Lion

Henrietta Rose-Innes’s latest novel opens with drifter Constantine on his way to retrieve the belongings of his childhood friend and one-time crush, zookeeper Mark Carolissen. Mark lies bandaged in hospital after a mauling by a rare black-maned lion that is one of a breeding pair that was under his charge. The male of the pair has been put down, leaving lioness Sekhmet as the last of her species. Con’s girlfriend Elyse tells him that recovering Mark’s things is ‘the human thing to do’, but this turn of phrase feels less clearly complimentary as the book proceeds. For Rose-Innes, human behaviour is unprivileged among that of the lions, pythons, and dassies that lurk in its pages.

Con makes his way to the zoo, a building that is some amalgam of the physical site of the old Groote Schuur zoo in Cape Town and the history of the Western Cape’s Tygerberg Zoo, 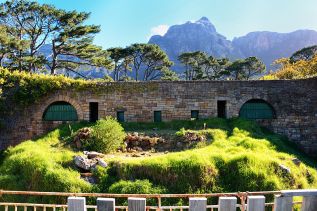 where a real project to breed black-maned lions back from extinction once took place. The zoo in Green Lion is both of these places, but also neither of them, a half-real, half-
dreamed space described as a ‘strange mirage […] bright new buildings floating on grim foundations’. The zoo’s chimerical presence – hiding a dark past, but nevertheless built upon it – suggests its dual role as a figure for the past’s haunting of the present in post-apartheid South Africa, and as a cipher for Con’s mental state. His life in the present is troubled by the death of his father, his shallow relationship with his girlfriend, and a childhood marked by unrequited adolescent desire and traumatic loss. 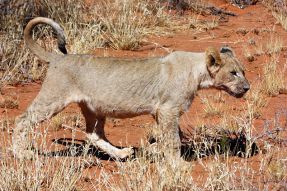 Stepping in for bed-bound Mark, Con adopts the role of Sekhmet’s keeper. If, on the one hand, Constantine’s name might recall Constantine the Great – famous for slaying a lion to prove his bravery – then on the other it suggests that such an association might well be a con. The central character is no hero, appearing instead as a young man struggling to feel anything at all as he works his way through grief. For much of the book Con feels distant, his emotions muted, but this is not a failing of the novel. Rather, in depicting this affective muting, Rose-Innes gives something that rarely finds a place in literary representation: the detachment from one’s own feelings that can accompany a loss in love, the melancholy of time’s passage, or the death of a loved one. Green Lion allows the reader to experience a bestiary of affects that are rarely elicited in books, but that are an important part of trauma and mourning.

As the narrative progresses, the lioness becomes a figure onto which Con projects his anxieties of loss and desire, leading to moments of suddenly heightened experience. His first meeting with her is charged with a crackling sensory energy:

He walked on, fingers trailing across each archway. Bars, stone, bars, stone – and then CLANG as his arm was smacked back by the force of some huge hot weight throwing itself against the metal. Con lurched away – for a moment glimpsing a snarling mask – and sat down hard, fingers burning, head buzzing with the savage noise. A liquid chainsaw roar. He gaped at the cage.

There is little visual information here, as the description is given over to the other senses – you feel the shifting textures of the archways under your fingers and the rush of mass against the cage, and hear with Con the whistling of adrenaline in your ears. Rose-Innes makes us not only see, but feel the atavistic terror of the scene, bringing us as readers back to our embodied animal states. This passage is all the more striking in the context of its emotionally subdued surrounds. These intense passages punctuate the narrative, giving a powerfully somatic reading experience that allows the reader to share Con’s shock at feeling suddenly and acutely alive.

His communion with the lioness was unpredictable. Sometimes, he was allowed to glimpse only significant parts: a paw, a flank, an eye…he could never see the whole. She’d wait for him to look away, then slip out and snag the meat, pulling it inside or into the shelter of a rock or bush…Sometimes she’d lift her eyes momentarily from her bloody meal to meet his gaze through the glass.

Even, as here, where sight is the privileged sense, it is allowed in partial terms only, teasing the reader with a peep-show of ‘significant parts’, and a languorous carnal gaze. Con’s ‘communion’ with the lioness is both spiritual and proto-sexual. As our first-hand experience of these animals becomes rarer, we attribute to them a spiritual significance that borders on the fetishistic. It is only halfway through the novel, when Con meets mysterious animal activist Mossie, that Con first sees Sekhmet ‘entire, unshadowed, close’.

From Rose-Innes’s earliest book, the immersive novella Shark’s Egg (2000), there has been a sense in her fictions that some power exceeding or supplementing day-to-day reality is at work. Her characters are compelled to act by mysterious external forces as much as by their own conscious motivations. If, in the passages quoted above, it is the drives of desire and death that compel characters to act, in others, it seems to be the drive of narrative itself that prompts action. When Con meets Mossie a second time, it is described as ‘inevitable’:

The vanes of the old Dutch mill on the other side of the road rotated gently, and he felt he was being brought to the apex of the bridge by some relentless mechanism.

Con’s reasons for moving towards outsider Mossie are not really psychological – they are driven by the ‘relentless mechanism’ of subconscious processes but are also inevitable according to the demands of story itself. To ask why Con goes to Mossie would be as useful as asking why characters in fairy tales go into the dark woods. Their actions are inexplicable in purely psychological terms, but are somehow inevitable in the logics of dream or myth, in which we feel compelled to play and replay our most irrational fears and taboo thoughts.

If Sekhmet provides one central point around which the book turns, another is to be found in Cape Town’s Table Mountain, now cordoned off as a reserve for wealthy trophy hunters. Inside the fence are indigenous species, reintroduced to the mountain in a bid at conservation. Outside, and sprawling away from the fence, is a shantytown housing those neglected by their society. Described so starkly, the book might sound heavy-handed, but Rose-Innes’s novel wears its politics lightly. What emerges is an ethically nuanced exploration of the competing claims of individual, familial, societal, and ecological loss. Green Lion is a quietly powerful novel, and a deft exploration of what it means to live on in the absence of those people, places, and things that once constituted the fabric of our lives.

Graham Riach is an AHRC postdoctoral researcher in the English Faculty at the University of Cambridge, and serves as Director of Studies in English at Emmanuel College. He also works as a filmmaker, a composer, and a translator of French and Japanese. Along with a group of colleagues, he established an international research cluster on South African Literature, called Writing South Africa Now: http://writingsouthafricanow.wordpress.com/

Henrietta Rose-Innes is a South African novelist and short-story writer. Her story ‘Poison’ won the Caine Prize for African writing in 2008, and she has held residencies at the Rockefeller Foundation’s Bellagio Center, at Georgetown University, and at the University of Cape Town. She is currently studying for a PhD in Creative Writing at the University of East Anglia.