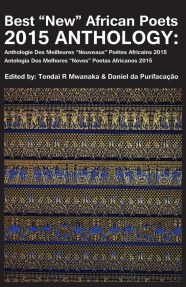 “We couldn’t give poets topics because we are not Africa. We didn’t want to determine what Africa speaks when she speaks” (xix).

The Best “New” African Poets 2015 Anthology, distributed in the USA by the African Books Collective (and in Cameroon by Langaa), is readable without being streamlined or cohesive. Editors Tendai R. Mwanaka and  Daniel da Purifacação explain in their introduction that the organization of the anthology was very much a grassroots project, organized by poets themselves rather than by the establishments that often neglect them. They put out a call for poems in an array of languages designed to ensure readers in the maximum number of African countries: submit, they said, in English, French, or Portuguese, for an anthology of this name. Beyond that, they didn’t specify a theme; their goal was to make poets heard, rather than to shape what they had to say. A rich selection of poems was submitted, and even with uncertainty about the framing or marketability of the final product, poetry organizations in Africa and worldwide helped spread the word about the final product.

In the final anthology, then, we can see poets interpret the call for poems in different ways: some poems are explicitly about the continent, others more personal – but rarely are they apolitical. Formally, they are mostly non-metered, non-rhymed, and image-centered. For me, a few poets stood out: Archie Swanson, a surfer and poet from South Africa, Shittu Fowora, whose work has appeared in Arc-24, Aaron Brown, who grew up in Chad and now teaches at Sterling College in the US, Togara Muzanenhamo, a Zambian poet of Zimbabwean heritage who’s published three collections so far, Chuan Ballard, who has lived all over the world, and Taijhet Nyobi, an African-American poet recently the recipient of the Lesbian Writers Fund. The standout poets I discuss below are, without a doubt, a selection biased by the fact that English is my primary reading language; overall, there are enough gems for any reader, I believe, to find a perusal of the anthology worthwhile.

Archie Swanson’s poem ‘non’ takes us off the continent, capturing that slippery feeling of freedom that South-South travel can bring:

Able to trade in the crushing labels of home for the “check by jowl/ scooter hooting […] warm welcome” of Indonesia, the speaker’s presence finally feels to him defined merely by the space he inhabits in this moment.

The poem would have been beautiful, and sad, had it ended there, but it does not. Never left in peace unlabeled at home, nor can the speaker escape the history he brings with him. “Forgive me,” he asks, for “we shackled you and called you non.” Travel can never be the antidote to double consciousness, he realizes, no matter the shedding and gaining of prefixes.

Shittu Fowora’s ‘Nouadhibou to Nouakchott,’ conversely, leans into its continental setting, almost daring readers, with its direct address, to find its imagery fanciful rather than ornate, august, and majestic. “Come,” Fowora writes,

Come in like those adventurous Frenchmen,
like the expeditious berbers and blue-turbaned taureg
who dug deep into my browns,
examined my soft for honey and gold,
I carry rocks inside of me, yet I do not mourn denudations.

This type of formal writing, its echoes of tradition so clear, is rarely done so well.

Aaron Brown has a similar gravitas, but his is of-the-moment in its razor-focus. His ‘Twin’ is, instead of ornate, modern and spare, instead of majestic, precise. It is in first person, never acknowledging the reader, instead keenly observing the speaker’s tea companion: seemingly his crippled twin brother, who, “doomed to watch others/ drive the herds out in the morning or mount/ the market trucks” lives a domestic life of dignified, 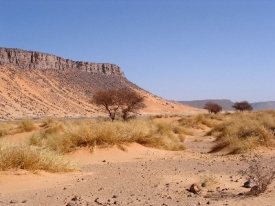 calming routine: his tea-pouring perfect, his ironing pristine. Unlike the “unblemished” speaker, the twin’s life seems to indicate to the speaker that his brother can quell the ache in his soul at the fact that their lives are lived on the margins – “on the Saharan edge, windswept and forgotten” (45).

To be born in 1931 means nothing here – joints ache
with each tired step, only the sky and rural landscape
soothe the memory’s walk deep with the quiet intake
of death. The wind sings through the grass, parrots rise
from bare trees, yet youth still whispers some reprise
his hunched shadow won’t easily surrender or forget.

Formally neat, and the form appropriate to the worker so cleanly drawn, these lines paint a century of history, from the personal – this worker – to the continental – Africa’s tumultuous 20th century – to the global – the twilight but not demise, in the 20th century, of the types of field work that don’t end with field notes.

begins Chaun Ballard’s ‘Chrysaora achlyos,’ and reading the collection would be worth it alone to see the way he develops this striking couplet.

Taijhet Nyobi’s ‘Bold Fade’ brings us into a familiar space for poets: the classroom, where the speaker comes into herself as a confident, feminist queer woman. The poem starts in the barber shop, “the space meant for men” where her voice when she asks for the titular cut, and goes from there to university, its lines providing all that needs to be said in response to those who bemoan the feminization of the undergraduate classroom:

The anthology features poems by seventy poets, largely focused, as was the editors’ stated intent, on those at the beginnings of their careers, with a few poems or but one chapbook yet published. With the broad geographical and open thematic remit, as well as the poets’ urge to have their poetry heard in a global conversation which often drowns them out, it is understandable that there was not room for more discussion of the editorial process. Nonetheless, I imagine this labor of love would have been the most complicated and most rewarding part of the book’s development, and I would have enjoyed reading more about the compilation. In addition, the practicalities of the undertaking serve to deprioritize the ever-present discussions about language in African literature; in future years, an editorial board with a wider linguistic spread or – my personal preference – an assortment of translators on hand or an opening of the call to include poems translated into those three languages – could enrich the voices brought to the table without diluting the goal of ‘fewest resources, widest readership.’ But this year’s anthology is hopefully the first of many, and as it grows in reputation it can more overtly engage in these debates; as it is, in the debate about the representativeness of African poetry anthologies, this by-the-poets, for-the-poets approach is very welcome.

Rashi Rohatgi has a PhD in Languages and Cultures from SOAS. Her fiction can be found in The Misty Review, her poetry in Allegro, and her academic writing in Matatu, Wasafiri, and other journals. Her recent monograph, Fighting Cane and Canon, is about World Literature in Mauritius. She is fiction editor at Boston Accent Lit, where she convenes the Accent Prize for emerging women of color writers.

The Best “New” African Poets 2015 Anthology (Langaa Research and Publishing Common Initiative Group) was edited by Tendai R. Mwanaka and  Daniel da Purifacação. Mwanaka is a poet, novelist, essayist, and visual and musical artist based in Zimbabwe; his recent works include Zimbabwe: The Urgency of Now, Revolution: Struggle Poems, and Finding a Way Home. Purifacação is an Angolan journalist, professor, and poet who divides his time between Mexico and Angola.

Langaa Research and Publishing Common Initiative Group is based in Bamenda, Cameroon. Its mission is “to contribute to the cultural development and renaissance of Africa.” The Best “New” African Poets 2015 Anthology is distributed in the USA by the African Books Collective.