When it comes to alliances and accords, Africa is full of them. Whether it is bilateral extradition treaties, regional trade agreements, or the pan-continental constitution of the African Union, there are everywhere traces of the extranational architecture erected to legislate the continent’s vast networks of power. Of course, some of these systems of control are less visible and more insidious than others. The extent of the authority wielded during the 1980s and 1990s by the World Revolutionary Centre’s network of ‘graduates’, for instance, has only come to serious light following the death of its founder, Muammar Qaddhafi, in 2011. Equally, there are some that are a little more visible but no less illicit, such as the trafficking of young refugees newly arrived in Ethiopia from South Sudan, Somalia and Eritrea. And then there are still others, like the augmenting drifts of language and religious belief, which are destined to remain beyond all but the most expert and local of eyes. What remains indubitably clear, however, is the complexity of Africa’s assemblages of peoples, objects and ideas, all of which to combine to produce peculiar kinds of knowledge about the continent.

It is somewhat appropriate, then, that it is by way of a new association between The Chronic, an increasingly popular pan African quarterly gazette, and Kwani?, the Kenyan literary journal founded in 2003, that we find some of this complexity distilled into narrative and visual form. Released in March 2015, “New Cartographies” is the fifth (of six) broadsheets to be produced by The Chronic since 2013, but the first such external collaboration. Illustrated throughout with disarmingly simple, hand-drawn maps, it traces the circuited movement of matter as dissimilar as war and water as it traverses the African continent. Inevitably, the direction of travel is rarely ever one-way. Where the cocaine and heroin landed at Luanda, Nairobi and Dar Es Salaam finds route to Johannesburg and Cape Town, for instance, images of aspirational living and celebrity culture make the journey back north along similar lines. But neither are these flows entirely regular, or even so geographically bounded. A map of the continent’s Soccer Cities—which has Lagos at its centre—is marked by an overlapping, intersecting network of arrows charting the intra- and international flow of players and grass-roots investment. It reveals a complex system of exchange that links Abidijan to Agidir, Accra to Algiers, and Cairo to Chonburi in Thailand.

Such maps, like the issue as a whole, are intent on disrupting the way in which Africa is known and imagined. At its most basic, cartographic representation is always an assertion of knowledge and, thereby, power. As Stacy Hardy puts it in “A Brief History of Mapping,” which serves as a useful introduction to the issue, “[o]ne never maps a territory that one doesn’t contemplate appropriating.” The axiom is as true for the digital age as it once was for Classical antiquity. Google, like the disciples of Ptolemy, are necessarily engaged in an “explicitly political project” (3). In reifying the authority of the map, however, these virtual institutions also help make it a tool of resistance. Envisioning Africa through a set of alternative networks, ones that reach far beyond the regular, well-documented flows of imperial and neo-imperial authority, The Chronic and Kwani?, are engaged, therefore, in their own act of appropriation. Or rather, it is an act of re-appropriation that attempts to reimagine and redefine how the continent understands itself, how it maps and represents its own knowledge of itself. Like much of The Chronic’s previous work, there is bold ambition, perhaps even provocation undergirding this act. There is also much substance. Maps aside, “New Cartographies” includes a series of lengthy analytical essays on the subject of the continent’s infrastructural and informational interconnection. Alongside these discursive accounts are more lyrical reflections on the webs of memory, faith and belonging that also weave their way across the continent, each of which unfold altogether more intimate and imaginative ways of charting the topography. Indeed, “New Cartographies” is as much about the imaginary life of Africa as it is its historical or cartographical representation. Their blending is precisely what sustains the issue and provides for its stimulating success.

For example, the issue opens with Bregtje van der Haak’s interview with Achille Mbembe, who lauds the imaginative possibilities made possible by digital technology in Africa. Acting to disturb the territorial boundaries laid out by European colonisation, the virtual traffic everyday flowing from Casablanca to Cape Town is actively “reshaping […] national entities,” remarks Mbembe (3). Similarly invisible but transformative flows are also the topic of 2003 Caine Prize winner Yvonne A. Owuor’s “Imagined Waters.” In a lyrical account of Africa’s navigable waterways and maritime communities, Owuor is drawn down into the spiritual life circulating beneath the surface. Here, amidst the “throbbing, pulsing, living richness” of the continent, she encounters “deep stories of African being” (10-13). If water provides for the continent’s sacred life, oil, as António Tomás descibes in “Living Dangerously in Petroluanda,” provides a source for its economic vitality. Both, however, are disputed resources. And in juxtaposing such spiritual and fiscal imperatives, these writers open out the fierce, sometimes violent contradictions by which Africa continues to be mapped.

Of the many highlights in “New Cartographies,” there are two that signal most clearly its general ambition and consequent achievement. The first is from Billy Kahora, a managing editor of Kwani?, who provides in a near mythopoeic tale, “How to Eat a Forest,” the authority that all maps, in their imagined idealism, threaten to wield over the reality of life as lived on the ground. What begins as a journalistic investigation into “one of the largest land grabs in Kenyan history”—at least that is how a set of concluding emails retroactively frame the story—finds itself twisted into an irregular narrative form by the thin, often confounding line separating “the ideal and the real, the disputed and the disparaged” (31). Kahora finds that of the many spoken truths encountered as part of his incursions into the threatened forests of the Mau South region, very few are evidenced by the actuality of the land. Representation and reality rarely meet in the forest. This reflects more than the fact of its mystical nature—something that Kahora, too, has to negotiate. It is a distortion driven by the competing desires of those that claim the Mau South Forest as their own. And in this space of reinvention, truth is refracted as easily as the region’s maps, many of which were nefariously rescaled by “crooked lawyers and land surveyors” during the late 1990s (28). As claims over the territorial find themselves unhinged from all terrestrial materiality, “schizophrenia,” Kahora suggests, becomes the normative state (31). Each clamant, the writer included, finds that they must inhabit two competing personas if they are to ever prevail over the contradictions that have come to determine this contested space.

If Kahora gives form to this cartographic instability, Chis Abani tasks himself with extracting its productive possibilities. In a short excerpt from his memoir, The Face: Cartography of the Void, the writer “traces the map of being in the realm of ‘neither/nor’ ” (15). Less a materially contested space, as it was for Kahora, this realm of indeterminacy is for Abani one premised on his conflicted sense of selfhood. As the son of a white Englishwoman and an Igbo man, Abani finds that the question of his racial identity remains always open and unfixed. Sometimes this instability takes on an existentially-threatening magnitude. At other times, it elicits only cruel comment. It is always, however, suspect. By way of riposte, Abani reflects on the critical potential of his “neither/nor” status. In a space where the markers of race, ethnicity and nationality are subject to increasing fissure, “[m]uch of the confusion about who I am,” Abani suggests, “is a product of how my face is read” (15). In this, he opens out the very crux of The Chronic and Kwani?’s collaborative issue: interpretation. The question for Abani, and indeed for the many other writers included in “New Cartographies,” is not how things are, but how they are imagined and understood. A lesson in reading, this special issue compels us to reflect on the technology by which Africa interprets itself, how it conceives of its own interconnections and imbrications, and, finally, how it finds potential in this self-representation. For Abani, this “meant I could be anything. Even Batman” (15).

And if somehow this thought alone was itself not sufficient to pique interest, like each of The Chronic’s broadsheets, “New Cartographies” comes with the latest edition of Chronic Books to encourage readers to extend this lesson in reading into works as various as the verse of Bigg Dogg, the Ugandan television serial Point Blank, as well as new titles from the likes of Ondjaki, Masande Ntshange, and Jennifer Nansubuga Makumbi.

Ed Charlton is a Mellon Fellow in Cities and Humanities at LSE Cities. He holds a PhD in English from the University of Cambridge and is a founding member of Writing South Africa Now, who will be holding their fourth annual colloquium at the LSE in June 2016.

The Chimurenga Chronic 5, ‘New Cartogaphies’ issue is available from the Chimurenga shop, as are other issues of the Chronic and a variety of different Chimu Tings (including the African Cities Reader, Chimurenganayas, books and other bits). 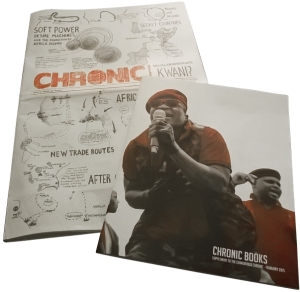