The Cambridge African Film Festival (CAFF) is very proud to be celebrating its 14th edition from 16 to 24 October 2015. We are honoured to have become an important part of the cultural agenda in the city of Cambridge, and are grateful to all our supporters.

CAFF is the longest-running annual African film festival in the UK. Since 2002, CAFF has been screening some of the best contemporary and classic African films; increasing knowledge and awareness of African and black culture in the East of England; and providing African filmmakers with large and engaged audiences. The festival has always been completely voluntarily run by a group of people who are passionate about African film.

About ‘From Africa, With Love’

We have selected three main strands: Love Brewed in the African Pot, with a ‘dine-and-view’ evening that will consist of a pop-up restaurant in which festival participants will watch prize-winning Ethiopian film Price of Love (2014, Ethiopia, Hermon Hailay) while enjoying Ethiopian food. This event will be organised in partnership with Menelik Education.

As part of the Love in conflict strand, which focuses on how love can overcome adversity in situations of conflict, CAFF will be hosting the screening of Kenyan film Stories of Our Lives (2014, Kenya, Jim Chuchu) with a series of short films dealing with different aspects of love among the LGBT community. The film will be preceded by experimental animated short film Yellow Fever (2012, Kenya, Ngendo
Mukii), which explores the effects of Eurocentric beauty ideals, as disseminated by mainstream media. The other title in this strand will be The Great Kilapy (2012, Angola-Portugal, Zézé Gamboa). This rarely shown Lusophone film does not just revolve around love, but also around music and resistance.

The evening will be followed by live music and a mini African fashion-show hosted by Congolese model Lisette Mibo’s charity Passion for Motherland, at the bar in Clare College.

About the Music and Resistance theme

Beats of the Antonov

Other than the Lusophone title in commemoration of the 40th anniversary of independence, with the multi-layered resistance featuring The Great Kilapy, CAFF will be hosting a political screening of Algerian historical fiction film The Man from Oran, about the first euphoric years following the Independence of Algeria. This film will be followed by a Q&A with Lyes Salem, filmmaker and main character of the film, in conversation with Dr Jean Khalfa, from Trinity College (University of Cambridge). 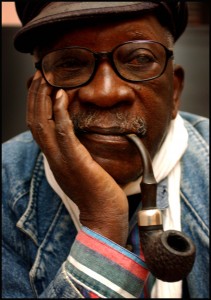 CAFF 2015 seeks to highlight the work of acclaimed African filmmakers who have been a source of inspiration in cinema production in the continent. One such filmmaker is Ousmane Sembène (1923-2007), from Senegal. His biographer and friend Samba Gadjigo has recently made a biographical documentary, Sembène! (2015, USA-Senegal, Samba Gadjigo & Jason Silverman), which we are delighted to be able to screen. Since in this documentary Sembène’s fiction film Black Girl (1966) plays a key role, and since it is the 50th anniversary since it was made, we will also be screening this film, which many consider the first fiction feature film to be made by a sub-Saharan African.

CAFF has always been committed to highlighting the work and talent of African women directors. This year we are excited to be offering a screening programme called ‘Experiments with love: young South African women filmmakers’ with films by Nobunye Levin, Nikki Comninos, and Jyoti Mistry, and with introductions by Lindiwe Dovey and reflections from Sara Blecher. These films complement others in the CAFF 2015 programme, such as Love the One You Love (Jenna Cato Bass) and Ayanda (Sara Blecher). In the past few years, South Africa has witnessed a dynamic new film movement, led by young women of all races, who are experimenting with the film medium to seek new ways of figuring South Africa’s past and present. What further binds these films is their attachment to questions of intimacy, interiors, and love: familial love, fraternal love, romantic love.