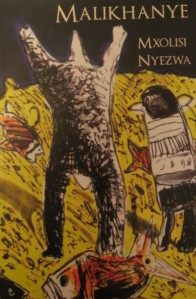 i cannot understand
why man exists
and why things happen

I discovered Nyezwa almost by accident during my PhD fieldwork in Johannesburg and immediately wanted to write about his poetry. His verse is little known in South Africa and it’s exceedingly bleak – a despairing political prophecy.

i want to know how the sea flows
how the winds blow
and how love is abandoned
why things have to happen like this
oh! so over and over again

Yet, that said, it’s a special kind of poetry. It does something different and there’s an enduring, stunning beauty and poignancy that could burn the page. If you’ll forgive me quoting myself:

Nyezwa applies a deftness of touch to the images that makes “things become intensely real [and] rendered brutally potent” (Allen 2012: n.pag). Their presentation is rarely linear and at times surrealist. In what Berold termed the “new aesthetic of the elusive image”, a single image is briefly presented before another is immediately conjured. This lack of progression and completeness creates an instability and uncertainty that reflects Nyezwa’s personal apprehension. The individual existence has been rendered fragmentary. In his own words, “the way things are, we are all just hanging on to pieces of meaning. We don’t see the bigger picture yet. When we see clearly we’ll all be caught off-guard” (2008: 25).[2]

But as you read through the collection you encounter the third section complete with inscription:

how do i say this, that once your eyes were like topaz
and your heart as clean as jasmine

After seeing that what do you say? What do you write? The following poems are hauntingly powerful and reveal a very deep personal grief. Is it really my place, as a literary scholar, to take that and make a public judgement on its quality and significance?

The ethical landscape of academia has always been rocky and complex terrain, though the officialese in this instance suggests that, provided it’s referenced correctly, published material is in the public domain and largely free for discussion. But the power of literature lies beyond the cold simplicity of filling in ethical review forms. Literature frequently challenges the conscience. Is writing about Nyezwa’s grief morally right? Finding an answer to that is altogether harder.

Academic debate can be a hostile world. It is one that rarely preserves emotions but can be inhabited by egos who are quick to dismiss what they don’t like in unforgiving terms. It’s also a discourse of reception. How can I be sure what I write does the immense emotion of the poetry justice or will not be misinterpreted? Moreover, academia is about searching for knowledge and, ultimately, for understanding. How do you understand what happened to Malikhanye and what his parents went through? You can’t.

you see, son, i want to hide behind bars
and fight forever

You can only relate. And if it was me, the grief would be mine. I wouldn’t want it shared or discussed. Avoiding the risk of sympathetic utterances, I’d need to find a way through by myself. If such survival involved words, they’d be my words alone.

However, Nyezwa chose for these poems to be published and that adds complication. The act of making public is perhaps an invitation to share. Perhaps the appeal of writing is the ability to make a contribution to the public space in a private way.[3]

today I want to write something
the bird on the walk was here, something

Indeed, does Malikhanye really mean what the words themselves suggest, or are the words there for each reader to attach their own individual meanings? Maybe facilitating such attachment is Nyezwa’s purpose and that is a process that demands sharing; somehow demands I write.

In the end I did. But I wrote half-heartedly. Penfold (2013) only discusses the poems in Malikhanye briefly and that is maybe the biggest tragedy. Nyezwa’s verse demands more than that: it is itself committed and demands commitment.

call you, your name
that is now full of secrets
and still refuses to slip away

For anyone who studies literature this is a familiar decision. I don’t know the answer.  You decide. Although I think this short piece is me continuing to attempt to work it out within myself, most importantly it remains about the poetry. Malikhanye was only three months old when he died but that was long enough to make a difference to his father, to me, to all those who have read the collection that bears his name.

malikhanye, you were once the slowness of the earth
until the volcano erupted
and made all mystic things more natural

everything was dead until you came and lifted the sun

[2] Penfold, Tom (2013), Black Consciousness and the Politics of Writing the Nation in South Africa, Unpublished PhD Dissertation, University of Birmingham.

Tom Penfold is currently a post-doctoral fellow at the University of Johannesburg where he is working towards the publication of his recently completed doctoral thesis. Tom’s research covers, primarily Black Consciousness affiliated, South African culture from the 1970s to the present. He is also interested in the relationships between literature and the politics of education and publishing.