Today, more and more literary events happen online. Readers argue over the plotlines of serialized ‘Facebook fiction.’ Writers tweet entire novels. And a Google Hangout with an author will draw a larger crowd than a signing at a local bookstore.

In an environment that is speedily virtualizing, it’s increasingly difficult to find a space for literature that is off-line, where texts are discussed face-to-face. Malawian writer Shadreck Chikoti has succeeded in creating one such forum with the Story Club, launched in Lilongwe in December 2013. The Club’s eclectic format varies somewhat per session—so far, it has included live musical performances, a film screening, and talks by writers, filmmakers, and academics. Its staple feature, however, is the reading and discussion of a guest writer’s story. It is in this respect that the Story Club recalls the famed Malawi Writers Group, formed at Chancellor College in 1969 by Jack Mapanje, Lupenga Mphande, and James Ng’ombe amongst others.

Along with Stanley Kenani, who has been short-listed twice for the Caine Prize, Chikoti is one of Malawi’s best-known contemporary writers. He has won several local writing prizes and was recently selected by Africa39 as one ‘of the most promising 39 authors under the age of 40 from Sub-Saharan Africa and the diaspora.’ Chikoti is also the Executive Director of Panafrica Publishers, which publishes ‘African literature for the African market.’

Chikoti’s diverse experiences have given him a broad perspective on Malawi’s writing and publishing industry, which faces a number of significant challenges. Book sales are low, printing is expensive, and publishers are often unwilling to take risks on fiction—focusing instead on textbooks, which have a ‘ready market’ in schools. ‘There are so many factors effecting the writing industry in Malawi,’ Chikoti says, emphasizing in particular the lack of professional editors, outlets for writers to publish their work, fora for creative exchange, and a book-buying public. The Story Club is Chikoti’s attempt to address this hydra-headed problem. ‘The Story Club is not just a forum for writers,’ Chikoti asserts. ‘Literature goes beyond the writer. If we want to improve the writing standards and the reading standards in Malawi, we need many players.’ 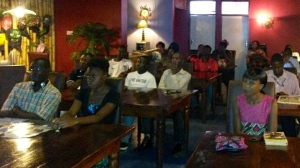 In April, I had the pleasure of attending (and presenting a brief talk at) the Club’s ‘4th congregation’ at Fantasia Korean Restaurant and Bar in Lilongwe’s Old Town. It was Easter Sunday, but still we had a crowd of about 25, including journalists, teachers, students, and several vendors from the craft market down the street. And although ‘off-line,’ the Story Club is by no means devoid of technology. The MC, Pius Nyondo, uses notes on his laptop to guide the proceedings. We listen to a pre-recorded reading of Muthi Nhlema’s short story ‘The Journey of Restoration,’ which Chikoti praises as ‘one of the best short stories by a Malawian.’ Afterwards, the discussion of the story begins with the reflections of three pre-designated readers, including Nyondo (currently the youngest Malawian to have published a book), veteran writer Lawrence Kadzitche, and Immulanie Makande, Chairperson of the Poetry Association of Malawi, Central Region chapter. As the story is read and discussed, many of the participants use their smartphones to scroll through Muthi’s story.

The space for the sustained discussion of literature is hard to come by these days. In some respects, writers are perhaps receiving more feedback, more quickly than even before. But there is, I think, a unique value to the critiques that we are willing to give a writer face-to-face, without the mediation of a screen, which so easily hides our own biases and weaknesses. Chikoti emphasizes that the Club encourages participants to debate the story’s ‘strength, weaknesses, beauty, and ugliness.’ The critiques of Muthi’s story were perceptive, fair, and surprisingly detailed. ‘You don’t need to say “sweltering hot,”‘ one of the commentators pointed out, ‘just one of these adjectives will do.’

In March, the Story Club launched a second chapter, helmed by Nyondo, in Mzuzu. It’s an admirable project and for Chikoti, a clear labor of love. More information on both chapters is available on the Club’s well-maintained Facebook page. Needless to say, this virtual encounter falls short of the real, face-to-face experience. If you find yourself in Lilongwe or Mzuzu, be sure to stop by. Whether it be for the music, the story, the socializing, or the debate.