Africa Writes is the annual literary festival from the Royal African Society – a celebration of contemporary African literature from across the continent and the diaspora, held in early July. Last year (2013), AiW were at the festival covering some key events, but the rhythms and significance of the gathering together of the contemporary London-based poets performing at Africa Writes’ ‘Diaspora Writes Back’ (July 5th, 2013) have stayed with and pursued our guest author Ben Verghese, from London to Cape Town and back… 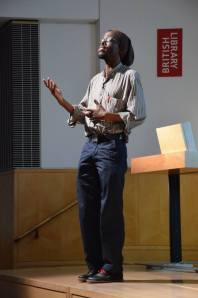 “She dances…” Leeto Thale’s words sing, “She dances with so much rhythm…”

Palms open, Leeto’s fingers point up, feeling toward the sky. “This rhythm,” he chants, “this rhythm, oh this rhythm, this rhythm possesses the beauty of life.”

The musicality of Leeto’s writing and performance helped set the tone in an evening of poetry staged at the British Library’s Conference Centre.

As Warsan Shire stepped up there was a notable hush through the auditorium, the entrancing tones of her wispy London-accent punctuated by the click click of cameras.

The audience stayed transfixed throughout Warsan’s readings, or rather spoken word performances. The newly appointed Young Poet Laureate for London’s expressions and gestures, as well as captivating performance, caused both giggles and gulps of reflection as she voiced her distinct spread of delicate, evocative subject matter for which she is becoming more and more known. Did Warsan really ask her mum that? Yes, maybe Rihanna does have a plan!  And, ah,  Johnny with the blue eyes, who “came with a bag of tools he’d used on other women”. “Silly boy, remember him?” Warsan asks, “Now he’s tied to the radiator of my basement,” music playing “to drown him out.”

Returning to Leeto’s delivery, for the most part his flow manages to keep a distance from conventional, clichéd vocal patterns poets can oh-to-often succumb to when reciting works in English. Tellingly, during the Q&A, Leeto spoke of the importance of rhythm within his creation process, “I’ve got to hear drums, I’ve got to hear hi-hats” echoing Warsan’s way of putting pen to paper – “I only write to music”. 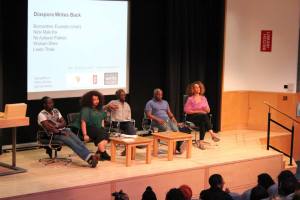 “I’m writing in a language I wasn’t beaten in!” Nii Ayikwei Parkes jested, following chairperson Bernardine Evaristo’s question to open the panel discussion, on how the poets’ craft is shaped by having each been born in an African country, or not, yet basing themselves elsewhere as an “African poet of the diaspora”.

As if the audience were not there, Nick Makoha directly thanked Bernardine for helping him find his own voice. The seated conversation highlighted Bernardine’s significance as a mentor to the generation(s) of writers on stage. Jacob Sam-La Rose and all at The Complete Works merit similar plaudits.

Also worthy of the applause that came its way on the night is Flipped Eye, the independent publishing house founded by Nii and through which Warsan and Nick have had works printed. If you are yet to handle that printed matter, Flipped Eye’s anthology of the individual author pamphlet series, The Mouthmark Book of Poetry is a strong starting point (including, among others, Shire and Makoha).

Perhaps an inevitability of the whole Festival’s continental framing, compounded by its location in a conference theatre at the British Library, was a repeated suggestion that areas addressing mixed heritage and identities were “African” conditions. With Stuart Hall in mind, that the “fully unified, completed, secure, and coherent identity is a fantasy”, the insistence on claiming continental ownership over such matters came up too often for my liking. Cannot such supposed “African conditions” be recognised as issues which can impact on anyone, beyond boundaries of the continent either of their birth or upbringing? Another comparative difficulty which also repeatedly reared up over the course of the weekend was the continued usage of “African” as a collective noun in a way “European” or “South American” was not (and rarely is). In any walk of life, commonalities can be found but from many of the participants at a literary event I had hoped for less monochromatic views of a continent’s vastness and complexities.

Perhaps both of these contentions are particularly diasporic concerns (African or otherwise), uncertainties from the befuddlement of living with, as Nii put it, “not just two eyes.” And with this more than duality, the Diaspora Writes Back spoke back, crisscrossing multiple rhythms, flows, languages, locations. The event ended buoyantly with Bernadine catching Warsan off-guard and presenting her with an FA Cup-sized trophy for being the first winner of the inaugural Brunel University  African Poetry Prize.

A worthwhile evening with local and global relevance, fingers crossed the night can grow as an on-going part of the annual summertime Africa Writes programme.

Ben Verghese is a writer/journalist based between London and Cape Town.

Audio extracts from ‘Diaspora Writes Back’ have been made available by Africa Writes here.