An archive of solidarity: The City of London Anti-Apartheid Group papers 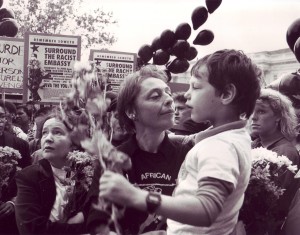 When I set out to research the history of the Non-Stop Picket of the South African Embassy in London, I knew I could trace enough former participants in that protest to make the project viable. I expected that many of these former activists would have kept their own modest archives of papers and ephemera from their anti-apartheid campaigning in the late 1980s. I knew I would be able to piece together other fragments of the story from the archives of the British Anti-Apartheid Movement, and from papers deposited in South Africa. What I didn’t anticipate was that we would discover that, in 1994, when the City of London Anti-Apartheid Group (who organised the Non-Stop Picket) ceased to exist, the entire contents of their office had been packed away and stored privately, gathering dust, ever since.

Here I probably need to give a little bit of context. The City of London Anti-Apartheid Group (City Group) was formed in 1982 by Norma Kitson, an exiled South African, her children, and supporters of the Revolutionary Communist Group. From the beginning the group regularly held protests outside the South African Embassy in London’s Trafalgar Square. In those early days, the group was recognised as a local group of the national Anti-Apartheid Movement (AAM). But, before long, Norma Kitson found herself in trouble with the leadership of the African National Congress (ANC) in London; and relations between City Group and the AAM rapidly deteriorated. By the time the Non-Stop Picket was launched in April 1986, City Group had been ‘disaffiliated’ from the national movement. While City Group never stopped offering solidarity and support to the ANC; once outside the AAM, the group developed a close working relationship with exiled members of the Pan-Africanist Congress (PAC) and Black Consciousness supporters. As a result, the City Group archive provides an opportunity to understand a different perspective on the international anti-apartheid movement.

David Kitson, Norma’s husband, had been imprisoned in South Africa for his role in the second national High Command of Umkhonto we Siswe. He became one of the longest serving white political prisoners in apartheid-era South Africa. One of City Group’s earliest successes was an 86-day continuous protest outside the South African embassy which resulted in David Kitson and his comrades being moved off Death Row in Pretoria. Unfortunately, by the time David was released from gaol in 1984, Norma had become too much of a thorn in the side of the London ANC. David was forced to choose between his family and his loyalty to the ANC and South African Communist Party. He stood with Norma, but it cost him his SACP membership and the fellowship he had been promised at Ruskin College, Oxford, funded by his union, TASS (now part of Unite).

The documents in the archive reveal much about how Stalinists within the British trade union bureaucracy uncritically followed the line of their allies in the South African party. They actively ostracized those anti-apartheid stalwarts, like Kitson, with whom they had political disagreements and who they could not control. Genevieve Klein (2009) has demonstrated those political prisoners and detainees whose allegiance to the ANC could not be guaranteed found themselves marginalised and often had to find support from other sources. This often led them to those smaller solidarity groups, like City Group who had good working relationships with the exiled structures of the PAC and Black Consciousness Movement.

City Group and the Non-Stop Picket played a leading role in building many solidarity campaigns for South African activists   who could not rely on the international support of the ANC and its allies. The archive offers insights into the development and functioning of the campaigns for people like the Upington 14 who faced execution in South Africa under the common purpose doctrine for having participated in a protest that resulted in the death of a local official considered by many to be a stooge of the apartheid regime. City Group also campaigned for the detained trade union leader and community activist Moses Mayekiso. Although he would later become an ANC minister in the post-apartheid government, at the time, the ANC were not keen for him to be the focus of a major international campaign. In addition to the specifics of these campaigns, the archive reveals much about how the PAC and Black Consciousness Movement functioned in exile in the last years of apartheid – a story that has yet to be adequately told.

At present, the City Group archive remains in private hands and is not open to the public. My colleague, Helen Yaffe, and I are working with its current custodians to find an appropriate public archive where the papers can find a long-term home as a resource for all those interested in the history of anti-apartheid campaigning. 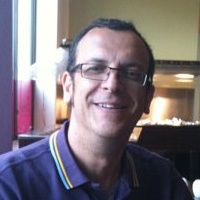 Gavin teaches social and cultural geography at the University of Leicester. His research on the Non-Stop Picket of the South African Embassy has been funded by the Leverhulme Trust.  You can find more stories from the Non-Stop Picket on his blog  and follow him @lestageog