(To reconnect with our Africa in Words review of the text, by Tom Penfold, please click here.)

‘Upsurge’ is one of two previews, excerpted, with the kind permission of the publisher, from Acts of Transgression: Contemporary Live Art in South Africa, Wits University Press: 2019. Edited by Jay Pather and Catherine Boulle. 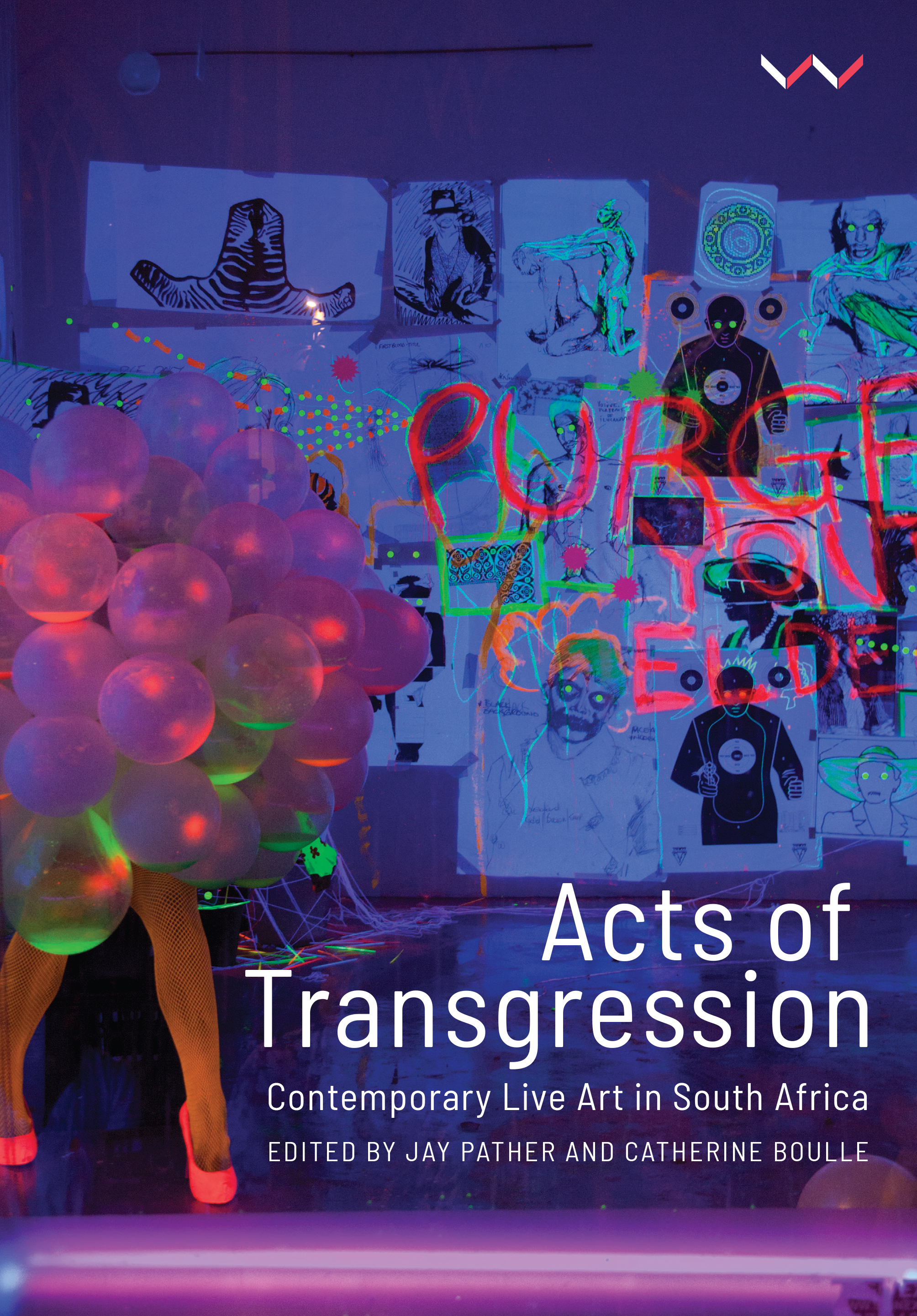 Upsurge, Sarah Nuttall.
The question of when an epoch begins and when can it be deemed closed is always open to a multiplicity of responses. So it is with South Africa, and its highly complex concatenation of what is past; when and how to characterise the present, how to read and understand times of crisis, upsurge and turbulence. For a long time during and after ‘the event,’ naming what has happened, its momentousness, might still be an object of contention. If to name is to interpret and therefore to assign a meaning, such a task is by definition unfinished since no account of an event or its meaning can be said to have captured everything. Every meaning is haunted by another meaning. This makes deciphering an interminable task, always subject to revision. These questions carry a particular vitality and urgency when writing of the upsurge of decolonisation debates of the last three years. What the event is and what shape it will take carries, simultaneously, a political and philosophical opacity and luminescence.

The velocity and unexpectedness of the social is such that naming it often comes afterwards, after the fact. Rarely does it precede the event. Even when a name announces the event, the latter seldom unfolds exactly as announced, and so there is always a gap between the event and its name. What we most often have before us are partial and fragmentary accounts. Every archive, whether of the past or the present, takes a set of standpoints in order to compose itself – and leaves things aside. Projects of reconciliation and revolution, which dispense with particular aspects of events, narratives or people’s lives, produce remainders as they sanitise the hard facts and affective dimensions of history. What has been left aside is not disempowered: it is always the seed of undisciplined energies, energies gained from their very position of having been left aside. These energies, recaptured by new social actors, are reinvested in acts of disruption, of upsurge. This could offer us our first frame for thinking about attempts at erecting an emerging archive on the ruins of an older one. Attempts, that is, at ushering in a new time.

Histories of Feeling, Epistemologies of Emotion

A second frame, or arc of questions, opens here. It is not only incompleteness, that which is left aside, that presents itself in times of epochal change or moments of historical ignition and turning: the freeing of energies that have been contained is also a period of intense feeling and emotion. How do we archive histories of feelings and emotion? Archives are often still understood as constituted by things that can be documented. That is, as constituted by things, objects, artefacts or traces of human actions that can be collected, assembled and classified. Such traces are usually thought to be tangible, visible or material. Even when they appear intangible, such as a voice that can be sensed but not actually heard, a material artefact usually frames them. How do we document a history of emotions? What would histories of democracy and nation-building (and their antitheses) look like if they were drawn in relation to ‘archive[s] of feelings’[1] and phenomenologies of emotion?[2] How might we ‘“read for emotion,’” Anna Parkinson asks, in volatile political landscapes.[3] We might examine, as Parkinson does in another context, ‘vital “scenes”’ of emotion,[4] enabling us to analyse the limits and consequences of a putatively democratic subjectivity or sociality, the role it assigns to emotions and the sometimes-traumatic dimensions of what it patently disallows. We can consider affect and emotions as forces that occupy and address the subject, for example the postapartheid subject, in a variety of ways. Reading for the multivalence of emotion, and for the dynamics of emotional reflexivity, enables us, Parkinson argues, to work with archives of feelings rather than with ‘memory’ as such.[5]

This is important in times of upsurge, as in the Rhodes Must Fall and Fees Must Fall movements in South Africa, and the concatenation of emotions that the work of discarding, destruction, reassembling and creation involves. The vital scenes that such work produces cannot be reduced to traumatic events alone. These are composed also from acts of defiance when existing norms are sometimes brutally confronted and disassembled, in which feelings are potent and capable of powering immense reservoirs of untapped energies, some of which are turned into social and political forces, producing a poetics and politics of turbulence.

As intense psychic energies are at work in periods of upsurge and turbulence, we can see emotion as an expression of what Parkinson calls ‘the legible social.’[6] The quality of an era’s affective structures, long after the traumatic event, and in relation to the compromises of democratic sociality, can help us to trace the meanings of a time. Complex and self-conscious languages of affective gestures can be made to speak: emotional turbulence, political upsurge and the labour of thought burst and spill as the clock turns to a different era, especially starkly. Emotions, for Parkinson, are not only ‘expressive outward manifestations of a subject’s interiority [but] an integral “hinge” or interface’ between the artist and the production of the social at large.[7] At the very least, this suggests and requires a different modality of archiving: an archive of feelings will be as much about remembrance and the restaging of material traces as it will and must be about the curation of ambivalence and turbulence. This is so because intense psychic energies are at work in periods of upsurge and turbulence. Tracing the meaning of a time through communities of affect enables the emergence of unconventional figures of the political. Put differently, emotions are an integral – and visceral – dimension of the grammar of the political itself.

We are particularly grateful for permission to publish these previews to underline the interventions of Acts of Transgression, and for the points of crossover with our AiW review. Tom Penfold’s review engages with the multiple ways the volume argues away from the “rationalist imperative to ‘put into words’” (2) and towards the moments of live performance art: in the “upsurge”, as Sarah Nuttall characterises it here, and the “concatenation of emotions that the work of discarding, destruction, reassembling and creation involves” (see below); and the possibilities of the “urgent call to reimagine” and “desire to know differently from what has historically been valued by institutions” – see Mwenya Kabwe’s ‘Astronautus Afrikanus: Performing African Futurism’.

Sarah Nuttall’s chapter, ‘Upsurge’ and Mwenya Kabwe’s on ‘Astronautus Afrikanus’ can be read in full in Acts of Transgression: Contemporary Live Art in South Africa (2019). With our thanks once again to the publishers at Wits UP. Acts of Transgression is edited by Jay Pather and Catherine Boulle.

Click here to reconnect with our Africa in Words review of the text, by Tom Penfold.