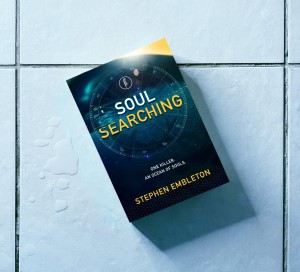 “The untapped knowledge on his doorstep in southern Africa was a continual source for honing his skills, and no amount of online reading and searching could replace face-to-face experiences with the people out in the dry Kalahari or the slippery peaks of the Drakensberg mountains.” (p.4)

“[O]ne of the leading centres for research emerged in southern Africa. Traveling down the same eastern longitude, intersecting with the Great Zimbabwe ruins, the Blaauboschkraal stone ruins and many still ‘undiscovered’ sites, to end at the opposite latitudinal position as the Pyramids, the city of Durban – with an unusually high concentration of stable energy –developed into the global centre of research.” (p.282)

Stephen Embleton’s debut novel, Soul Searching is one of a growing body of works coming from Africa best described as African speculative fiction or Africanfuturism. As the excerpts above perhaps indicate, like many speculative/ futurist stories by African writers today, Embleton’s novel deliberately and explicitly centralises the continent in the future. The novel draws on tropes of science fiction while incorporating meditations on human experience and philosophies of life and the afterlife. This is a quick-paced narrative written with precision and interlaced with registers of the criminal and banal, magical and real, spiritual and technological, futuristic and current.

Set in Durban in 2038, Soul Searching is structured around the crimes of a serial killer. But the story that unfolds goes some way beyond the immediate crime narrative. Our protagonist, Ruth Hicks is a chief Soul Tracker, whose aim it is to stop criminals in their tracks, helping to curb the reincarnation of criminal souls in the process. The Trackers maintain a kind of surveillance system, keeping watch on a new tech Screen and plotting the trajectory of souls as they move from the Earth Plane to the Etheric Plane. The serial murders are something of a thin veneer on what is ostensibly a story that reveals a much larger narrative about systems of belief on our planet.

By highlighting the value of ‘alternative’ belief systems and methods of knowing, Embleton’s narrative pushes against the Western ideological status-quo in science fiction. The novel is marked by astronomical traditions; sangomas are written into its pages; and, the interesting persona Ma’at, a goddess ostensibly based on the Egyptian goddess of truth and harmony, figures centrally. We learn about Ma’at through the characters’ regard for her and their talk of her omnipotence. But the voice of the goddess narrator is also an important, mystic authority of its own, intermittently appearing between sections of the novel:

“Now, world, what would you have me do?
The soul tracking system is taking root around the globe, and the world willingly watches on as the flagship unit in South Africa continues to fumble in the darkness. And though they wish to be the faint light that pushes back the dark, what would the world be without shadows? After all, shadows are cast by objects and people. As the goddess Ma’at, I seek the balance.” (p.39)

Perhaps something of a departure from traditional plot-driven crime fiction and science fiction, Embleton foregrounds characterization in his novel. It is notable that the lead role is female. Ruth is pragmatic and, while motherhood preoccupies her sense of self, it is work that drives this character. Ruth’s husband Allen, on the other hand, appears to operate at a lower frequency. If Allen is still concerned with his career, he is altogether more measured, more philosophical than his wife. The relationship between Ruth and Allen is interestingly portrayed. As mentioned, Ruth is a Tracker, a scientist, a medically-trained technician, while Allen, although similarly scientifically-minded as a Curator of Birds in an Ornithology Department at the local Museum, is perhaps more sceptical about the revelations technology is said to bring humanity. While man and wife appear at times to embody disparate tenets of spirituality and scientific logic, it is through this main partnership in the novel that a very literal marriage of apparently opposing beliefs plays out. Overall, the close attention paid to characters and their relationships with one another underscores how belief systems form, influence, and are entangled in lives, and this starts from the moment of childhood. As parents, Ruth and Allen join the likes of Ma’at as figures of guidance for the young characters in the novel, and especially for their son Caleb.

The author provides a perspective of our world in the near future, where technology is challenging humanity; an underlying criticism in the novel is that new technologies do not always present the best way forward. Such critique is somewhat plainly depicted in the character of Mike Haddon (nicknamed Angel):

“Studying all aspects of the afterlife, divination and traditional beliefs that, for centuries, had been deemed occult, had given Mike a range of tools necessary to interpret the symbols and figures on the Screen. Things that a computer’s algorithm couldn’t decipher let alone perceive” (p.4).

Soul Searching is a work that packs in and tries to do a lot, but throughout its 368 pages the author maintains suspense and with moments of poetic prose interwoven, the sense of intrigue and craft is also conserved. While Embleton comes from a background of graphic design, the speculative short story form is perhaps what he is best known for – appearing on Kalahari Review and in various anthologies, including Imagine Africa 500 and the AfroSF volumes one and three. From the way Soul Searching reads, however, the author clearly takes to the longer form with some ease. Mixing strategies of analepsis often ascribed to tales of the magically real and proleptic strategies of harder science fiction, as well as interweaving crime, Embleton’s style is similar to other prominent South African speculative fiction novelists, novelists such as Masande Ntshanga and Lauren Beukes.

This debut exemplifies the work of a sensitive writer with a gift for imagining the inner lives and afterlives of humans. 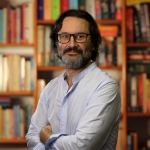 Stephen Embleton was born and currently lives in Durban, KwaZulu-Natal, South Africa. His background is Graphic Design, Art Direction in Advertising, and Film/Video production and directing. One of his short stories was published in 2016 in the Imagine Africa 500 speculative fiction anthology (reprinted in the Manchester Review in 2017), followed by more in the ‘Beneath This Skin’ 2016 Edition of Aké Review, The Short Story is Dead, Long Live the Short Story! Vol.2, and the debut edition of Enkare Review 2017 – and more. Stephen is a charter member of the African Speculative Fiction Society and its Nommo Awards initiative.
Soul Searching is his debut speculative fiction novel, published in August 2020 by Guardbridge Books (UK).

One killer. An ocean of souls.
Science has learned to understand the soul, and can track souls through this life and beyond.
A specialist unit of the South African police is using a Soul Tracker device in a harrowing search for a serial killer. But when one’s soul can incriminate them before birth, can there ever be justice?
This science fiction novel by South African author Stephen Embleton has been likened to a mix of “Minority Report” and “Silence of the Lambs”, with unique ideas all its own. The thrilling story features a serial killer, new and disturbing technology, and an ancient secret society. And flying cars.

Like Loading...
‹ Q&A: ABC-Words on the Times– Francis Nyamnjoh and Kathryn Toure from Langaa RPCIG
Remembering Olive Schreiner 100 Years After Her Death ›