when you hear storm alerts!” a text said.

We look out for the traveler’s tale especially. They bear that extra flavour of the road not taken. They are the buffalo portions to our regular veal,  the Basmati to our usual fare of lowland rice. The journey yields gain for those who hear of it, more so with the knowledge that no real journey is entirely without peril. Humanity wasn’t always so mobile as it is today and if trends are any indication, the future of humanity’s tread on the earth may be more conservative and circumspect in the future. The poems in Edwardsville by Heart (Wisdom’s Bottom Press) — a clutch of even-toned reflections of a time spent in the United States of America, south of the Mason-Dixon line for the most part — described by the poet himself as poetry, travelogue and memoir, carry the flavour of such a tale. 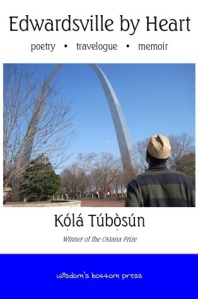 The title of the collection co-locates the text’s two primary dimensions, the physical and the emotional, and, as the book unfolds, performs their fusion on occasions. Poetry thrives on these experiments and Tubosun, grown into adulthood somewhere on the prime meridian of Eurocentric geography, here makes reflective capital of his brief relocation to the ‘New World’.

In ‘Stepping Out’, the very first poem in the collection, the poet’s persona literally steps out into a midwestern Illinois autumn, a season presaging winter, strange to tropical consciousness. The reaction of the senses is instructive: the eyes note the yellow of the leaves, that must have contrasted sharply with the vagabond green of home vegetation; the ears register a bellicose dare of geese, in contrast, one supposes, to domestic encounters with local chickens; the feet, ‘like divination fingers’, strangely tactile and seeing, make acquaintance with the brown earth of Edwardsville.

In this new geography of experience, the whimsicality of naming is amplified early on: Cougar Village, no less, is the new home of the nomad. At one with the big cats, native to the Americas, predatory but quiet (the cougar cannot roar), the instinct to know, if not to mark, the territory kicks in as the poet steps out – no surprises there. What may surprise the reader is a tiny detail folded into the telling — of an escape, the pattern of which, laid out in verse, is simultaneously an escape from as it is an escape to. This is significant. A constant trope throughout is the golden fleece in the Nigerian sagas of the 20th and now the 21st century, when the Nigerian currency was strong and so the dominant framing was of a seeking. Something changed. Hear the poet himself:

of the many demons from

which hope had sprung

that brought me here,

for which the journey

into this promise of a life

was some act of fleeing,

was both a saving grace

and distance, a respite

in shawl and shield.

A pragmatic pulse beats through the heart of these poems. It is a practical aesthetic that drives each poem from baseline unto the cusp and over each tipping point. It is not disguised at all but it does make, when juxtaposed against what earlier Nigerians recorded of their adventures abroad, for a modulation of pitch. As well as the shawl to shield against the cold, the poems articulate the other needs — of wine for the chemistry of conversations, of a Nissan, for legroom and distance. In the poem ‘Three Degrees Centigrade’, the speaker describes what must have been a sea-change from the cold of the harmattan winds of his childhood and youth, child’s play compared with the new lows the American thermometer registers. We know there was preparation for the shift in living conditions with a freezer back home: the poet confesses this much. We also know, because the poet says in not so many words, that there is nothing that quite prepares one for these things. The opening image reveals that, while this level of coldness may insulate or isolate, it also generates: the touch of a student’s cold hands, the poet tells us, ‘brought electric sparks to me’. But still, there is caution: a resistance of the temptation to walk on the ice; a clinging to Centigrade as opposed to the American counterpart measure (Fahrenheit).

The altered sense of space and its use touches the seventy-one odd poems in Edwardsville by Heart and it is fascinating to see how the poet carves himself a new accommodation in the new expansive country. In the Preface, there is a hint of a visit to an ancient Native American settlement, but this never materializes in verse; in his poetic journal entry of a planned visit to East St Louis, Illinois, the frank danger of the undertaking is laid bare and a red flag of battle is hoisted over the city, notorious for being one of the most violent in the world. By the time we arrive in Iowa, coming to the last poem in the fairly robust collection, we meet a changed persona, one who has transformed from a tentative adventurer on a street in Edwardsville’s ‘Cougar Village’ to one whose idea of courage may yet mark him out as feral:

“How’s this for courage?” I joked,

stand-pissing on a tree at Iowa

in the front of the Capitol

with its gold glistening dome.

We weren’t found or fined, yet

reams of the scare drawn taut

on the American’s face

offered no response to the taunt

that this, indeed, was a freedom

that only my country allowed.

The memorable events recorded in the journey through the collection may delight a reader of poetry, of travel, of individual lives. Yet there is a fourth kind of reader who may benefit otherwise, the student of feline urology or the anthropomorphic evolution of the phenomenon from which emerged the Manneken Pis — the 61cm bronze fountain sculpture in the centre of Brussels (Dutch for ‘Little Pissing Man’), said to embody the zwanze, or the Belgian sense of humour — and its less well-known counterpart, the Jeanneke Pis — the 1987 more diminutive 50 cm bronze, which depicts a little girl with her hair in short pigtails, squatting and happily urinating on a blue-grey limestone base — background for the speaker’s own Iowa Capitol piss. The temporality of “the piss”, its attendant geographies and associated touristic atlases notwithstanding, the demons from which the poet initially announced flight are in the end revealed as obdurate shadows, casting themselves wherever daylight meets them, as long as the frame of the poet’s body, wherever it moves or travels.

Tubosun, happily, isn’t one of those earthstruck poets who, captivated by the breathtaking sights of Utah and Arizona, told so much of canyons and mountains, geography and demography, that they forgot to deal more with human interactions, to say what went on in the blood of youth, gathered to learn and teach. His many encounters with cats, deer, women, fellow scholars, community police volunteers, gravesite managers, retired professors, cabbies and handymen document a solid picture. The gravamina of race relations in North America are skillfully elaborated. If minds were cameras, the portraiture in Edwardsville by Heart would be of the top, uncompromising, Hasselblad quality.

These poems are also best when well removed from the scatological. They work their magic in moments of deeper reflection of what it means to be a man in a world that has voted inexorably for modernity. The tensions between textural transcendence that’s neither American nor Nigerian and the granular minutia of pre-philosophical instinct bring out the poetic element in which this work basks. The poet has come a long way from merely rhyming verse to where the world itself has called a terminus. In Yoruba, a language rich in tones and tonalities, a possible rendering of the word poem, or ewi, is calling it as it is. We look forward to the poet’s next moves.

Kọlá Túbọsún is a Nigerian linguist and writer based in Lagos, Nigeria. He is a joint winner of the Saraba Magazine Manuscript Contest in 2017 and the winner of the 2018 Miles Morland Scholarship. He is the recipient of the Premio Ostana Special Prize for Mother Tongue Literature (Cuneo, Italy. 2016). He writes in Yorùbá and English and translates between both languages. He has also been translated into Korean. Túbọ̀sún’s work has appeared in AfricanWriter.com, Arts & Africa, Aké Review, Brittle Paper, International Literary Quarterly, Enkare Review, Farafina, Maple Tree Literary Supplement, Popula, Saraba Magazine, The Guardian (Nigerian and UK), ThisisAfrica, and recently in Literary Wonderlands, an anthology of literary essays edited by Laura Miller. Edwardsville by Heart, his first full collection of poetry, was published by Wisdom’s Bottom Press, UK: http://www.edwardsvillebyheart.com/. See the author’s website: https://kolatubosun.com/ 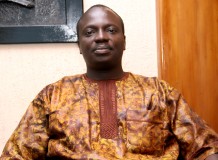 Tade Ipadeola is a poet, essayist, translator and lawyer. He is a past president of PEN International (Nigeria center) and a winner of the Nigeria Prize for Literature for his work The Sahara Testaments (2012). He is anthologized in New Nigerian Poets, edited by Ishmael Reed (2000), and the author of A Time of Signs (2000), and The Rain Fardel (2005). In 2009, Ipadeola won the Delphic Laurel in Poetry for his Yoruba poem, ‘Odíderé – Songbird’ (awarded in Jeju, South Korea). His work has been translated into Dutch, Korean, French, Kannada, Spanish and Xhosa. He has translated works from respected poets like W.H Auden, Joséphine Bacon and Tomas Transtromer into Yoruba and is working on translations from Daniel Fagunwa’s Yoruba novels into English. In 2015, he was a Bellagio Artist Fellow of the Rockefeller Foundation. His latest work is the co-curation of A Deeper Country (with Maria McManus) for the Poetry Jukebox project in Belfast, Ireland.

Words on the Times | #PastAndPresent: Revisiting Kólá Túbòsún and Uchechukwu Peter Umezurike in conversation
We are very pleased to be able to share Words on the Times – an AiW Q&A set initiated to connect up our communities and experiences of the pandemic – from the author of Edwardsville by Heart, Kọlá Túbọsún, and from scholar and writer Uchechukwu Peter Umezurike.
These Words hark back to a 2019 conversation between Túbọsún and Umezurike, ‘Poetry as a vehicle for telling stories and interrogating memory’, on the release of Edwardsville by Heart. There is an excerpt of this interview, which speaks across the collection and has productive cross-currents, depths and fields to Tade Ipadeola’s review above, as part of their combined Words on the Times post, with a link through to read it in full.

Like Loading...
‹ Q&A: Words on the Times & theatre in the digital space – Walter Kahuma of Tebere Arts Foundation shares his thoughts on theatre and creativity in 2020
Words on the Times | #PastAndPresent: Revisiting Kólá Túbòsún and Uchechukwu Peter Umezurike in conversation ›