Home › Books › A Dizzying Tale of Duality: A Review of Nawal El Saadawi’s The Fall of the Imam.

A Dizzying Tale of Duality: A Review of Nawal El Saadawi’s The Fall of the Imam.

A girl is chased through the night with her dog, looking for her mother in the dark, until something strikes her from behind. The girl—whose name is Bint Allah, meaning ‘Daughter of God’— falls, and asks the persecutors following her: ‘Why do you always let the criminal go free and punish the victim? I am young. My mother died a virgin and so will I’, to which they reply, ‘You are the child of sin and your mother was stoned to death’ (1).

So opens Egyptian physician, writer and activist Nawal El Saadawi’s seventh novel, The Fall of the Imam, translated from Arabic by Sherif Hetata. The 2020 re-release of The Fall of the Imam by Saqi Books (first published in 1987) is part of their reprinting of two of El Saadawi’s novels, and we will also be reviewing Two Women in One (first released by Saqi in 1985) in the coming weeks. In The Fall of the Imam, the narrative pivots around a triad of death, religion and hypocrisy through tales concerning the desire and judgement of women, and the murders of the titular Imam and Bint Allah. El Saadawi’s cut-and-stick-like novel repeats and re-articulates these dramatic events continuously, creating an elliptical narrative that is more akin to prose-poetry than to the traditional novel format. The dreamlike, sweeping language runs like a ribbon through the text, tugging away at certainties and consistencies, leaving traces of meaning, but ultimately indeterminacy.

In her preface to The Fall of the Imam, El Saadawi explains that ‘When I was a child, I used to see God in my dreams […] I discovered that the face of God appears to all children. Usually He looks like their mother, sometimes like their father’ (xi). The appearance of the face of God, blended within children’s dreamscapes, pervades the novel and masks and appearances define the omnipresent figure of the Imam whose face mutates into a disguise: ‘I saw him fall, and as he fell I watched the face before me change slowly into another face, into a face I had never seen before. A strange face, neither human nor animal; a face that belonged not to a man, or to a father, or to an Imam’ (16). Also in her preface, El Saadawi details how the novel is guided by her interactions with women across the Middle East, like that of ‘the Iranian Shahbani Shiraz who told me the story of her “little girl”, raped by her jailers’ (xii). Taking place in an unidentified Muslim state, mimicking the different tales in One Thousand and One Nights in its fantasy narrative, The Fall of the Imam flips between multiple perspectives: the Imam, his inner circle of the Great Writer and the Chief of Security, the Imam’s bodyguard/body-double, the Imam’s unnamed legal wife (a Westerner and renounced Christian graduate), and the illegitimate orphan, Bint Allah. The novel’s internal tensions also reflect the politics of its conception in 1987: the Chernobyl nuclear tragedy, as well as Ahmed El-Rayan’s Ponzi scheme built on the exploitation of religious piety. 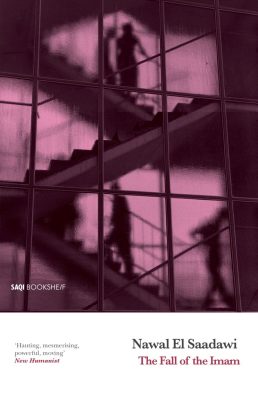 Saqi’s reprint of The Fall of the Imam.

El Saadawi’s story returns again and again to the night of the Big Feast, the night that Bint Allah escapes, is captured, and is eventually murdered. Just before she dies, Bint Allah always asks her murderers polemical questions: ‘What crime can be the crime of a virgin never touched by the hand of a man?’ (171), ‘Who is the criminal who you mean?’ (151), ‘Where did the Imam see God?’ (28), and the particularly pointed positioning of the question I opened this review with: ‘Why do you always let the criminal go free and punish the victim?’ (1). Women in The Fall of the Imam are the critics of the state, the brave pariahs who challenge the repressive regime. And they are always punished. When women (Bint Allah and the Imam’s legal wife) hold the narrative voice, El Saadawi shifts the focalisation between third and first-person, pointing towards a manipulation of temporality that directly results from the possession of women and the gender-based violence that ensues. ‘The Legal Wife’ begins in the third-person perspective. In its present, the narrator is known to us only as the wife of the Imam and the narrative voice holds with the detached ‘her’: ‘Her diamond earrings trembled to the sound, shivering with the thousand lights focused on the Imam from all around’ (35). Yet, just a page later, recounting a time when she is unmarried and independent of the Imam, the ‘legal wife’ exercises the self-possessive ‘I’: ‘It was he that took me away from my misery. I saw him seated on his throne and fell in love with him immediately’ (36).

This ‘twoness’ continues through to the Imam’s character, where duality is presented as both hypocritical and dangerous. A mythical figure and a guardian of faith, the Imam is also a tyrant who imprisons and tortures those who dissent. The weight of contradiction is embodied by the Imam and is summarised as Bint Allah’s responds to her persecutor’s statement ‘His name is the Imam and he is everywhere’, with ‘he who is everywhere is nowhere’ (9). In fact, I would say that this doubling implies an emptying of meaning and is replicated in the assassination of the Imam on the night of the Big Feast. To protect himself from harm, the Imam chooses a bodyguard who is his ‘living image’: this man, an employee, must wear an exact rubber replica of the Imam’s face over his own, making it ‘impossible for anyone to distinguish between the true and false Imam, even if it were his own wife’ (51-52). The masking of the Imam and his bodyguard confuses the narrative, never revealing completely whether it is the Imam that is killed or the bodyguard, concluding cleverly through this obfuscation that the repressive state, and the state actors who claim a divine right as leaders, will continue to oppress the outsiders of society, performing acts of terror without foundation as arbitrarily as those who are then lined up to take on its mask.

The absence of linearity in the novel’s narrative is so pervasive that it makes me wonder about its status as a metaphor for the chaos of a terrifying extremist-religious state. The dizzying repetition – its shifting evocations of inner lives and surface presentations, its implications of similarity and difference, in and out – though mainly successful, can disorientate to such an extreme that the complexities of the novel and its rendering of its setting can become lost in maze-like dualities, or at worst, be rendered too simplistic an analogy as a response. While the text prompts me to note that my reading is from outside of the cultural framework and original language that The Fall of the Imam is produced from, I see this extreme non-linearity as its strength, working explicitly against the traditions of narrative structures devised (in the most part) by men. In subverting any sense of centre and concrete understanding, El Saadawi suspends the reader in a state of flux and the unknown, replicating the feelings of Bint Allah and other women in the narrative.

Reading The Fall of the Imam takes time and care, and definitely warrants a second reading. Obsessively repetitive and complex, El Saadawi’s novel is a triumph in depicting form which performs a deeper function, explicating the dangerous cyclical pattern of repression in the name of extremist religion. An acerbic critic of organised religion and autocracy, El Saadawi uses her fantasy narrative to deconstruct assumptions, leaving the reader with a feeling of ambiguity and reciting the questions: Who is speaking? Who is killed? Why are they killed? When will it end? Ultimately, this is a book concerning the duality of the Imam and Bint Allah— both of whom believe in their innate connection to God through his appearance in their dreams. But Bint Allah sums up their irrevocable differences best towards the novel’s close during her trial:

‘What is day for you is night for me, and what is happiness for you is sadness for me. Pleasure for you is plain to me, and victory for you means defeat to me. Your Paradise is my hell and your honour is my shame, whereas my shame is your honour’ (221).

Nawal El Saadawi is an Egyptian public health physician, psychiatrist, author, and advocate of women’s rights. Sometimes described as “the Simone de Beauvoir of the Arab world,” El Saadawi is a feminist whose writings and professional career are dedicated to political and sexual rights for women. Her books include the titles Woman At Point Zero, Memoirs of a Woman Doctor, and The Hidden Face of Eve.

Ellen Addis is the editorial assistant for Africa in Words. She is a Master’s graduate from University College London and is currently researching the impact of cultural studies in the regional and global space.

You can buy Saqi’s reprint of The Fall of the Imam here.