Afrika Eye is an annual film and arts festival in Bristol, UK and is the South West’s biggest celebration of African cinema and culture. The festival brings films and diverse perspectives on Africa and the African diaspora to challenge the stereotypes, dispel the myths and explore the traditions and transformations in the ever-changing social and political landscape across this vast continent.

There are film and arts events in various venues across Bristol from early November and the festival culminates in the cornerstone Watershed weekend, where you’ll find a packed programme of film and discussion, as well as a Friday night party.

Watch: Why Afrika Eye is great! 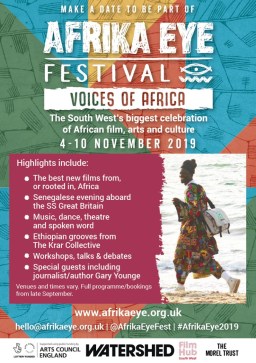