Zaahida Nabagereka recently completed work on her doctoral thesis at the School of Oriental and African Studies, University of London (SOAS) focusing on the politics of language and its impact on literature production in Uganda. Based in London, in 2014 she co-founded Afrikult., a literary organisation seeking to widen access to African literatures. Afrikult. devises and facilitates workshops with young people nationally and internationally.

At the end of June this year, Zaahida was in Bristol to chair a panel she’d curated for the 2019 Africa Writes – Bristol literary festival entitled ‘Mother Tongues: Translation and Publishing’. This gave me the opportunity to catch up with her and ask her some questions about her work.

Abbi Bayliss for Africa in Words: I wanted to start by asking what is Afrikult.? What was the inspiration behind it and what is your role within it?

Zaahida Nabagereka: Afrikult. is a literary organisation seeking to widen access to African literatures through interactive workshops and events. Henry Brefo, Marcelle Akita and myself founded Afrikult. in 2014 whilst we were all MA students at SOAS. We met during Literatures in African Languages class and ended up feeling like we wanted to do something that involved sharing all the knowledge we had learned with other young people. I would say our roles started out being quite fluid; as time has gone on and Henry is no longer active within Afrikult., Marcelle and I have been able to focus more on our individual strengths and interests with our Afrikult. work. I am particularly keen on the work we do with schools.

AB: How has Afrikult. adapted over the years and do you feel you’ve grown and changed with this organisation? What have been the biggest challenges and lessons learnt within the process as well as the biggest successes you’ve enjoyed?

ZN: Afrikult. is a labour of love. Henry, Marcelle and I started it as students, so finding enough time to make your hobby into something that is more than that was a challenge. Over the last 2 years since it has just been Marcelle and myself, we’ve found that getting adequate funding to do the things we want to do has been another really significant challenge. As we have developed though we have become clearer about exactly what it is that we want to do, so that has made things slightly easier in some respects. Personally I think attaining our first Arts Council England Research & Development grant was a big success and I’m looking forward to building on this in the future.

AB: Interactive workshops and bringing African literature to schools, events and festivals is a big part of what you do –  ranging from helping students in preparation with their GCSE exams to opening up discussions about an inclusive curriculum which the education system is very much in need of. What do you enjoy about delivering these workshops and why is learning and discussing African literature in these environments so important to you?

ZN: I take great pleasure and satisfaction from knowing that I am giving students what I didn’t have, and really would have enjoyed whilst studying at secondary school. I loved literature as a teenager and really enjoyed reading Jane Austen and Shakespeare but literature at this point in my life did very little to open my eyes to the breadth and diversity of what literature really is, what it can do and who it is about and for. So in our work with schools this is something we aim to do; quite often we find that pupils think that the word ‘literature’ refers to books written by men in English, so by challenging this with teaching them about female Xhosa praise poets for example, we are able to give them a more nuanced and informed perspective on literature.

AB: The Afrikult. team have also worked internationally. You took part in the Kaduna Book and Arts festival, Pa Gya! A literary festival in Accra and have worked alongside Jalada Africa collective in Nairobi and Writivism in Kampala. Why was it so important to you to bring your literary and creative writing workshops to young people and adults to Africa, and how has this experience influenced your future plans for Afrikult.?

ZN: It is important because the UK is not the literary centre of the world, and as our focus is on widening access to African literatures, it’s fantastic whenever we are able to take our work to African countries. We have found that the study of literature in some secondary schools in African countries mirrors that of schools in the UK, meaning it is not diverse and focuses too heavily on English and English writers. We are very keen to continue working with cultural and literary festivals in Africa, but also working with literary organisations such as Jalada Africa who are changing the way people access literature.

AB: I’m sure you must have a never ending list of African authors you love, but what would you choose to be your top three favourite books and why?

ZN: Decolonising the Mind by Ngugi wa Thiong’o is one of my favourite books, mainly because it has contributed so much to shaping my academic work as well as what I do with Afrikult.. Another favourite is Devil on the Cross also by Ngugi wa Thiong’o. I really love the political aspect of this text, and the comments he is making about ‘independence’. A more recent favourite would have to be Manchester Happened by Jennifer Nansubuga Makumbi. She is just such a gifted story teller and this collection of short stories is captivating. I’ve not been able to stop thinking about it since I read it!

AB: What new things have you been inspired by within the African literature scene?

ZN: The most inspiring thing to me has been Jalada’s online publication of Ngugi wa Thiong’o’s The Upright Revolution in Gikuyu and English, and how it has now been translated into over 80 languages in total, with over 40 African languages. This is amazing.

AB: Tell me a little bit about the Stories of Home project, what is it and what do you hope to achieve through this campaign?

ZN: Stories of Home was a pilot workshop project we started in 2018 around refugee week. It was a workshop for displaced peoples to think about the meaning of home using African literary texts as the stimulus. We looked at the poetry of Warsan Shire and Nick Makoha for example, who have both written beautifully about not being able to go ‘home’ and what it is to belong. This year we’ve been putting together the pieces written by participants into a Stories of Home digital anthology which Momtaza Mehri has edited. The aim of the project was to shed light on this really important issue as it is all around us, but also to promote understanding and healing. 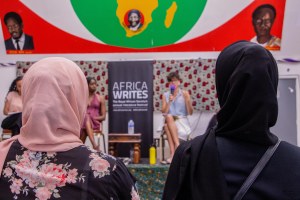 AB: At Africa Writes – Bristol you were in conversation with Victoria Adukwei Bulley, Hanna Ali and Lily Green (with a video intervention from Lucky Grace Isingizwe) about the impact of literary translation and publishing in African languages. What were the drivers behind this conversation and what do you hope emerges from it?

ZN: There are over 2000 languages in Africa but we tend to focus on African literature in English or other European languages, so I am always interested in work that seeks to represent African languages. I wanted to create a platform for writers and literary producers who are also engaged in these debates through their craft and publishing to talk about the ways in which they’ve approached different projects, what reactions they have had from their audiences and how this reaction has changed depending on which language has been engaged with.  I hope what emerges are continuing conversations!

AB: Afrikult. celebrated its fifth birthday in July – congratulations! How did you celebrate this important milestone?

ZN: We are planning to celebrate our 5th year over the next 12 months with different events. The first event was on Tuesday 16 July at the Free Word Centre, where we had a special book club session hosted by Bookyshybooks, aka Zahrah Nesbitt-Ahmed who talked us through some of her favourite African women writers. We also launched the digital anthology of Stories of Home at this event alongside eating yummy Ghanaian food prepared by Wakye Leaf Caterers!

Abbi Bayliss is a digital illustrator, poet, journalist and Bristol-based creative whose work centres on her experience as a woman of colour in Britain. Abbi’s work consistently features women of colour that she is uplifted by either in her immediate community or the greater global one. Her work explores topics of relationships, heritage, and mental health. To Abbi, representation is not only important but vital in modern day society. These topics interest her whilst also inspiring her creative practice.

For all ‘elefriends’ - travel into the new semester with Dan Wylie’s book Death and Compassion: The Elephant in South African Literature @witspress 🐘🐘 . . . #Academia #SouthernAfrica #AiWPicks #bookstagram #AirportReading #AiWReads #AfricanLiterature #danwylie #witsup #elephant #deathandcompassion #SouthAfrica
“I stare at the ceiling, watching as the machine covers the new stain. The triangle appears not long after that.” . . 🪐 Begin #2020 by stepping into a different world with SF by @mntshanga 🪐 . . Find extracts on @joburgreview @Umuzites . . #bookstagram #leftovers #speculativefiction #masandentshanga #triangulum #maths #comingofage #africanliterature #AiWReads
"The idea of a singular hero and a manifest destiny just makes us lazy. There is no destiny. There is choice, there is action, and any other narrative perpetuates a myth that someone else out there will fix our problems with a magic sword and a blessing from the gods." . . 🌹The perfect cosy Friday afternoon reading Rosewater by Tade Thompson🌹 . . Get ready for a mini spectulative fiction series from us! 🌠☄️ . . #rosewater #tadethompson #sf #spectulativefiction #nigerianliterature #africanliterature #nigeria #bookstagram #books #wormwood #aiwreads
Fairy lights still on for Morrison @chattobooks 🌌 . . #Essays #Speeches #Meditations #AiWFestivePicks #LeftOvers #2020 #AiWReads #bookstagram #tonimorrison #mouthfullofblood
Last of the holiday lights and the holiday reading @EditionsJCLattesLeMasque @abdourahmanwaberi.official 🎄 . . #AiWFestiveFaves #bookstagram #Waberi #festive #12daysofchristmas #africanliterature #christmasbooks
El Saadawi forthcoming reads, The Fall of the Imam and Two Women in One - AiW reviews in the new year, ta to @saqibooks! 📚 . . #nawalelsaadawi #bookstagram #aiwfestivefaves #christmasbooks #saqibooks #2020
My Tweets